Reflections on the Age of Citation 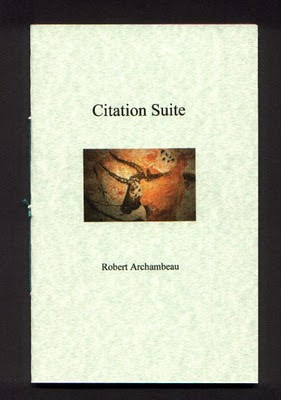 Citing David Orr's recent citation of Randall Jarrell is probably a bit too arch a way to begin my own little excursus on the meaning of citation in contemporary poetry, but I couldn't help myself. If Orr is correct about the currently dominant use of citation — that it has become a means for poets to affiliate themselves with those with whom they'd like to "hang out" — then apparently I'd like to pull up a chair at whatever dingy café puts up with poet-critics who want to jawbone the night away with their observations on the state of their art. That sounds about right, so I'm giving Orr's point a lot of credence.

Orr argues that the new emphasis on citation as a means of affiliation with one's contemporaries is, in some degree, a function of the migration of poets into academe. I think he's right. But I think there's another way, beyond that mentioned by Orr, that the migration of poets into the academy affects the use of citation, a way I can best get at by citing some recent observations about creative writing and literary studies made by my colleague Josh Corey over at his blog.

Orr's recent article in the New York Times (in which the present humble blogger's most recent book of lit crit gets a brief shout-out) argues that epigraphs have been proliferating at the start of poems and books of poetry. "[W]hile epigraphs have always been a part of poetic tradition," says Orr, thinking of T.S. Eliot's Wasteland, "they do seem to be unusually thick on the ground these days." This jibes with my own experience as a reviewer, a reader, and as judge for a first-book poetry contest. But Orr goes beyond mere observation, and moves into explanation.

Orr mentions the great narrative theorist Gérard Genette, who classified the function of epigraphs into four categories: as a comment on the title of a work; as a comment on the main body of the text; as the invocation of a kind of patron saint (in this instance, “the main thing is not what [the epigraph] says but who its author is" says Genette — or, as Orr puts it, the point of citing, say, Karl Marx, "isn’t Karl Marx’s wisdom, it’s 'Karl Marx'"); and finally, the epigraph as a signal that one is part of a certain kind of culture — here, the epigraph-slinging author “chooses his peers and thus his place in the pantheon.” This last one, says Orr, has become the main mode of citation in contemporary poetry.

When Eliot cited Dante and Heraclitus, says Orr, it was to position himself as a peer of the Great Dead Poets. It was, I suppose, a way of acting on the principle Eliot articulated in "Tradition and the Individual Talent": that the past and the present are in some way simultaneous, and in conversation with one another. Eliot wanted to pull his chair up to the table — not in some local coffee joint, but in the celestial realm where Homer and Virgil and Milton walk around together, like the philosophers in Raphael's "School of Athens."

But now most citation is different, says Orr: "once a symbol of ambition, the epigraph is now more likely to be an indication of community. It tells us less about whom a poet hopes to equal and more about where he’d like to hang out." That is, citation has become less about fitting into some trans-historical conversation, and more about fitting into a niche in the contemporary scene. Orr explains:

Partly as a result of the art form’s academic attachment, poets are increasingly knit together in complicated patterns based on mentorship, instruction or just basic university proximity. These structures can encourage a kind of association via pedigree that greatly resembles association via epigraph. [It is at this point that Orr gives a shout-out to Laureates and Heretics, a book in which I write about some prominent poets like Robert Hass and Robert Pinsky as they emerge from the same graduate program, but only a boorish self-promoter would bring up the mention, and only a truly shameless cur would link to the Amazon.com page for the book, which really does make a great gift for all occasions, and should be in your local library and on your coffee table.]

There's much truth to this: citing one's teachers is an obvious example, but so is the citing of the canons of one's teachers, poetic or otherwise. There's nothing wrong with this (whenever anyone connects poets to academe, someone out there always seems to consider it an insult to poets — an attitude worth examining, but not right now). Poets do tend to want to position themselves in relation to others in the field — and since one of the functions of the Great Migration to Academe has been that the center of gravity has become geographically dispersed, this affiliation isn't often done by hanging out at the right place for your kind of poet (St. Mark's for the early New York School guys, the little storefront called "The Bureau of Surrealist Research" for Breton's band of Surrealists, what have you). The positioning is accomplished by giving the appropriate kind of shout-out at the start of one's book.

But there's another kind of citation, one also, I think, connected to the residence of poets in academe. I'm thinking, here, not of citation in the form of epigraphs at the start of books, but of significant citation and allusion within poems themselves. I was at a reading the other night where one of my favorite Chicago-based poets, Simone Muench, read from a new book of hers, a book consisting of centos — that is, of poems composed entirely of lines from other poems. I like this kind of thing, and have done a fair bit of it myself: "Citation Suite," for example, is a kind of pseudo-cento, a poem made by combining different pieces of text the way music combines and reshapes key phrases (I was sort of high on Roland Barthes "Death of the Author" at the time, with it's notion that the traditional idea of the author is dead, killed by Surrealism and Structuralism, and replaced by the "scriptor," whose only power is to "mingle texts").

Of course this kind of citation has been going on forever: Wordsworth's Prelude makes plenty of allusions to Milton's Paradise Lost, which in turn is saturated in citation of, and reference to, Biblical literature (and much more). But I think there's been an increase in this sort of thing, and I think it comes in large measure from a way of thinking we find in academe.

Consider Josh Corey's observations about literature in the academy, occasioned by his reading of Elif Batuman's review of Mark McGurl's The Program Era: Postwar Fiction and the Rise of Creative Writing (how's that for levels of citation?). Here's what Josh has to say:

Batuman's piece gets to the heart of the tension between the two modes of approaching literature and the literary: a literary scholar comes to value historicization and contextualization above all else, and when reading a novel tends to focus on the ways it was influenced and generated by other novels. Self-expression is ancillary to the task of scholarly writing, and there's also the assumption that literature, and the criticism of literature, is a collective enterprise, an ongoing conversation. Lit begets lit, as crit begets crit.

Creative writing students, on the other hand, value self-expression, originality, and "creativity" itself, displaying what McGurl calls "not a commitment to ignorance, exactly, but … a commitment to innocence."

This seems to imply that scholars who pursue a literary PhD would be attuned to citation, while creative writing types wouldn't be so attuned. But then Josh goes on to describe his own experience as both a "literary scholar" type and a "creative writing" type, mentioning that he has "painstakingly acquired the habits of scholarly writing, which insist that you not write on a given poem or author without familiarizing yourself with "the literature" on that subject." This is interesting, because the kind of hybrid figure he mentions is actually much more common than we tend to think it is. While there are places where creative writing and literary studies live in isolation, there are also plenty of quarters of academe where they cross-breed. Josh is one example of the poet who is also a critic/scholar. David Orr is another. So am I. So, in her range of teaching, is Simone Muench. We're everywhere, and I think it's inevitable that in some of these hybrid cases the contextualizing, citational habits of the scholar and critic will find their way into the work of the poet.

Of course there's more to say about the causes and effects of the Great Migration of the poets into academe. One effect is touched on by David Orr, who notices that poets tend to cite Wallace Stevens over T.S. Eliot by (in his reckoning) "something like 15 to none." Stevens is very much the poet of the isolated intellectual (unlike, say, Yeats, who at times sought a big, national public, and unlike Eliot, who eventually cultivated a role as a kind of public moralist, and unlike Robert Frost, who wanted to be a Wordsworthian "man speaking to men" of common things in a common language). Surely his popularity with academic poets has something to do with the academic poet seeing himself in conversation primarily with fellow academic poets, rather than with a big, middlebrow audience, in the mode of a Tennyson or a Longfellow. I'd like to be able to cite some evidence here, but I'm still at work on the big, tedious, academic study of the changing relation of the poet to art and audience since Romanticism. Ask me about my progress on it after my next sabbatical. Or wait for an announcement in the press — if it's any good, it may get cited in The New York Times