In Which I Get My Hate On 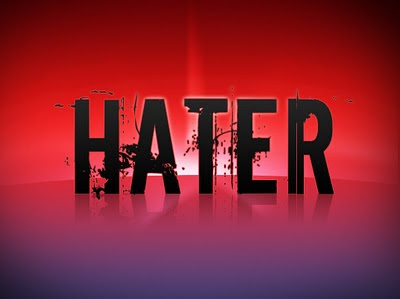 The other day I received an email in which the offending writer referred to me as "insistently upbeat and chipper." I think it was meant as a compliment, but I was utterly aghast. I mean, it goes against my self-image. When I was young and pretentious, I used to think I glowered and scowled like some kind of Byronic wanderer-upon-the-earth, in quest of Truths beyond the ken of normal men. Then I sort of caught on to my own jive, and came to see myself as a more of a garden-variety lumpy grouch. Am I now to relinquish even that delusion? Never! Fight on, I say!

But how? The last time I can remember making a whole swath of people think of me as a negative jerk was an incident almost a year ago, on Facebook. There was some kind of meme going around, in which one was meant to name something that one hated, but the most people loved. An answer sprang immediately to mind: dogs. I fucking hate dogs. I find them needy, filthy, and vaguely dangerous – like adjuncts (I kid! I kid! — but only about adjuncts. As I may have mentioned, I fucking hate dogs). As one might imagine, the response was swift and brutal, with the united forces of all of Facebook's dog lovers crashing down upon me, baying for blood.

I thought I'd played the game well — some people had put in responses like "paying taxes" and "paper cuts," neither of which seems likely to be beloved by the majority (except perhaps in certain Japanese fetishistic subcultures). But you've got to watch out for these dog-lovers: their sense of acceptable objects for critique ends when Schnookums' big wet eyes and butthole-exposing bobtail enter the picture.

So anyway. I thought I'd try to do some damage to this incipient sense of an upbeat Archambeau by listing things, other than dogs, that I just can't stand. If some of these are things you admire, more power to you: I speak not with the Universal Voice of Wisdom, merely with the curmudgeonly voice of the portly academic.


I think that's about it. One must not go overboard in one's bitching.

Email ThisBlogThis!Share to TwitterShare to FacebookShare to Pinterest
Labels: I'm not sure what to call this.
Newer Posts Older Posts Home
Subscribe to: Posts (Atom)