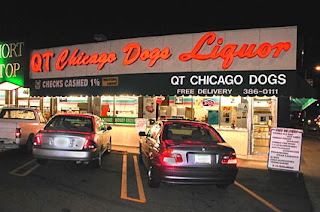 I woke up the other day and realized something: this is, for however brief and shining a moment, where it's at. This being our fair city of Chicago, it being American poetry.

I'm as surprised as the next guy: much as I've disagreed with Ron Silliman over the years, I kind of believed him when he said Chicago has been "the Rodney Dangerfield of writing scenes," the scene that can't get no respect. That was certainly true when I first moved to Chicago back in '93. A refugee from South Bend, Indiana, I'd decided it was better to commute out to Notre Dame than to live in the 'bend another day. "Decided" might not even be the right term: it was more of a compulsion to flight than anything else. Anyway, while I was glad to be in Chicago, and there were plenty of poets around, there really wasn't anything you'd call a scene, except for slam poetry — a kind of writing that wasn't my thing (though ask me about my brief and inglorious tenure as a judge at the Green Mill's Uptown Poetry Slam someday — it's a tale of humiliation I never tire of retelling). A few years later I briefly tried to remedy things, and I remember having grand schemes for making something happen. I booked Michael Heller (who was passing through town) to give a big talk about poetics, and beat a drum around town hoping to assemble the local literati. Assemble they did, or many of them, at Jax, a bar near UIC. But as I looked around the room at the different tables of people, I realized how atomized things were: the U of C crowd was over at the U of C table, hunched in turtlenecked seriousness. The UIC types kept to the UIC types, the Northwestern people were crowded, perhaps ironically, into the southeastern corner of the room. Academic and atomized, that's what we were. I'd tried to convince myself, in an editorial in Samizdat, that this was a good thing, a sign of nonconformity, but now I see myself as having been squeezing the local lemon as hard as I could in a futile attempt to make lemonade.

But over the last few years things have really started to feel different, and not just to me. My new colleague at Lake Forest, Josh Corey, recently arrived from Ithaca, describes a reading he gave at the guild center thusly: "Chicago continues to impress as a poetry center: the audience was large, diverse, and appreciative—there are genuine poetry fans here." And just the other day I stumbled across Kevin Killian's Amazon.com review of the new anthology of Chicago poets, in which he says:

When young poets ask me, where should I go, what should I do, nowadays I always say pull out a map, throw in a dart. X marks the spot, but Chicago is the most exciting scene around. Years from now we'll be looking back at the early 21st century and wishing we'd all relocated there at this time in poetry history.

So it's not just me being sticking my head outside the door of my study, where I'd been sitting in bearlike hibernation, and being overawed by the sensory stimulation. There's something going on in the big grid of beaux-arts two-flats and the rows upon rows of Mies dan der Rohes by the lake. In fact, I think we may be seeing the rising crest of a third wave of Chicago poetry. 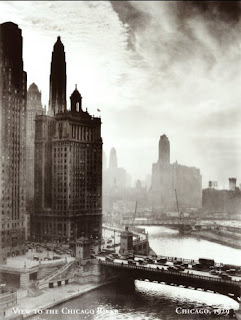 The story we hear about the first wave of Chicago poetry is that it was a tsunami of modernism conjured out of the lake by Harriet Monroe when she wrangled the funding for Poetry magazine early in the century. And this is true, too, as far as it goes: where there had been only scattered efforts, suddenly something seemed to be happening, and there seemed to be a here here. But Poetry — as much a hangout as a magazine, since the office door was never closed to a passing poet, and local heroes like Carl Sandburg could be found opining over tea within was only the respectable end of the scene. Down in a now long-since-gentrified area once called Towertown, by the water tower, there was an equally vital institution, a bar/theater/lecture hall called the Dil Pickle Club (with one 'l,' not two, for reasons I'll tell you about someday if you're willing buy the drinks, and able to withstand about an hour of Archambeau being a blowhard). Here, if you could find the door down the alley, and were willing to duck low to get in, you could meet Sandburg in a more unbuttoned mode; here you could hear the Wobblies read political verse; here you could run into pre-San Francisco Kenneth Rexroth (another poet-critic refugee from South Bend) as he and his crew delivered a Dada-inspired anti-reading, complete with planned disruptions by hidden alarm clocks and planted accomplices in the audience. Poetry's story has been pretty well consecrated, but the Dil Pickle story has yet to be fully told, though the poet/publisher/Breton scholar Franklin Rosemont has assembled a great series of documents in The Rise and Fall of the Dil Pickle. But one thing that unified Poetry and the Dil Pickle, making them the respectable and raffish poles of the same scene, was the aesthetic they embraced: both were open to the latest things from around the world, hip to experimental modernism, and at the same time deeply committed to the local scene. 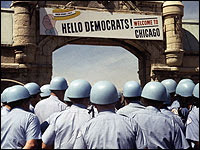 Poetry, of course, is still around, a giant sequoia in the forest of the art, but it doesn't have the same local function it once had: eighteen stories above Michigan Avenue, it isn't a hangout for the local poets, and thinks of itself (rightly) in national or international terms (something it did under Harriet Monroe as well, though in her day it was both local and international: Tagore and Sandburg both dropped in for tea). The bohemian world of Towertown disappeared in the forties, taking the Dil Pickle with it, and while there were plenty of poets in Chicago in the fifties and sixties — especially African-American poets — one would be hard-pressed to find a cohesive poetry scene, however defined. As Paul Hoover has said, when he was here in the late sixties and early seventies Chicago was "a fly-over city" in terms of poetry. All that changed, at least for a while, mostly due to the efforts of Paul, and of Maxine Chernoff, and of others, many of them alums of the English department at UIC (somedday I'm going to make a list of all the poets who studied there under Michael Anania, the godfather of Chicago poetry over several decades). Suddenly Chicago has the Poetry Center, and a bunch of little magazines (including New American Writing and Barry Silesky's ACM, still going strong, though only ACM remains a Chicago institution). The goals here seemed similar to those of the first wave: to bring in the best of what was happening elsewhere, to mix international currents (Surrealism, say, and the New York School) together, and to foster local writing too. For all that, though, the scene seems, in retrospect, to have had a bit of a junior varsity quality, in that the sign of success was to leave: Hoover and Chernoff left for San Franciso, and when Hoover looks back on his time here, he writes with pride of his students who made it elsewhere (they “were being accepted into the country’s leading MFA programs: Brown, Bard, Columbia University, the University of Iowa [and] Bennington,” he says). (I've blogged about this before). 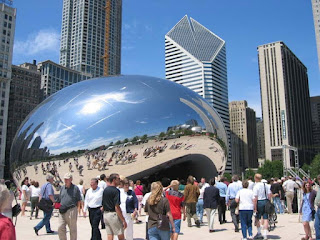 Maybe the scene was too successful in creating people who wanted to make good elsewhere to last. Whatever happened, though, the wave had rolled back considerably by the 1990s. But in the new century there's a whole new turbulence, and the city seems to be a place people come to, rather than leave. Much of the real energy comes from a set of readings-series, generally unaffiliated with any big university or cultural institution: there's the Discreet Series, the Danny’s Tavern Series, and the Myopic Poetry Series, Series A, and Powell's North does a good job, too. There's Woodland Pattern up in Milwaukee, which seems plugged-in enough to what's happening in Chicago to be included. There are journals — the Chicago Review is in one of its longest-running smart and impressive phases, though less interested in local things than it could be; there's Conundrum and the wonderful LVNG; but just as important for the local scene there's a big online presence: Simone Muench has a weekly poetry feature at the Chicago art blog Sharkforum, Chicagopostmodernpoetry.com has a kind of who's-who of Chicago poetry in its profiles section, Seven Corners Poetry quietly showcases the poets of the city, and a bunch of people you meet on the scene blog it all as it happens. There's even a kind of running index of events at Golden Rule Jones. With Don Share's arrival at Poetry, I bet even the branches of that mighty sequoia are going to start shaking a bit with the noise from the streets.

Posted by Archambeau at 1:35 PM No comments: