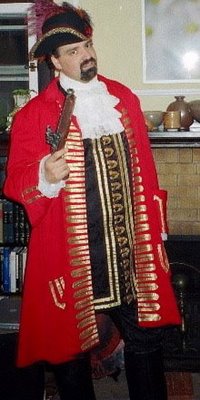 I've been getting a lot of emails asking me about "Poem for a War Poet, Poem for a War," the poem that won the Illinois Arts Council Literary Award this year. I've also, surprisingly, had a few messages about the image of a town crier I posted with my note about our new poet laureate. Apparently word has gotten around that I've been known to dress like that myself. This isn't quite true. I've never felt the urge to dress as a town crier. But I have been known to swan around in one or another version of a pirate outfit (only when appropriate: you know, on Halloween, or at weddings and funerals), and I can see why the more Captain Morgan-looking version of the pirate gear could confuse people.

So. By popular demand, two items that don't sit that well together: my poem and a photo of me in pirate drag. Do with them what you will.

I should note that the poem appeared in Another Chicago Magazine, and in my book Home and Variations. Also, in a desperate attempt to link poem and image, let me make the following offer: anyone who can identify all the poems from which I've pillaged lines for my own poem will win a valuable prize -- a map to the lost treasure of Dread Pirate Archambeau).

The lines are helpless in this time of war. They survive,
if they are a poem, in valleys of their saying, they survive
and reach for valleys where bodies cough, bleed or stumble blind.

The lines on the roads are refugees,
Their paths are marked with ink, charted
on a General’s table. Your lines are a poem.
While you are singing, who will carry your burden?

A woman bends beneath her load, a young man stutters in his fear,
A guard at the valley’s border lets them through,
or not. Your lines are a poem.
Who will carry your burden?

Posted by Archambeau at 2:23 PM No comments: