A Flight Through Space That is Inhabited: Addendum to the Contingent Manifesto 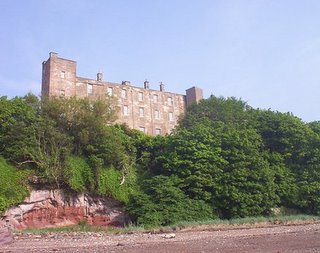 There's been some interesting feedback on the 1.0 version of the Contingent Manifesto, both by email and on the blogs. Patrick Durgin writes in from Buffalo, praising the rhizome form that I've maligned, and pointing out (quite rightly) that ontological and contingent difficulties can coexist. Mark Scroggins threatens to name names (go for it, Mark -- we need a usable past for contingent poetry), and hints that Louis Zukofsky would play a big role in his contingent pantheon. I'd love to hear about this -- anything Mark says about Zukofsky is bound to be interesting. Josh Corey, it turns out, has been interested in the same work by Kristin Prevallet as I have, and has posted some interesting reflections that I'll have to think about.

But for today, here's the promised follow-up to the Contingent Manifesto (1.0) -- an actual reading of parts of an actual poem that I think actually embodies contingent poetics.

The work in question is John Matthias’ poem “Northern Summer,” a poem that does much of the work I imagine a poetry of contingency would do with history, docment and synchronicity, and it is the source of my other catagory, "language working upon consequence, consequence upon language." I’ll quote a lot from the poem, since I imagine most of the people likely to read this blog either haven’t seen it for a while, or at all. To understand it you need to know that it was written at a time when Matthias and his family were trying to make a new home for themselves near an old castle in Scotland. You also need to know a short poem from which some of the key images are derived. That poem, “‘Void Which Falls Out of Void’” by Göran Sonnevi, was translated from the Swedish by John Matthias and the Swedish poet Göran Printz-Pahlson for their 1979 volume Contemporary Swedish Poetry:

However relevant!
In the infinite freedom I can
keep back, give
my notes resilience, in relation
to each other, to my whole body, which also
falls in infinity through empty space:
e.g.
Charlie Parker’s solo in Night in Tunisia on May 15th 1953.

The flight of sentimentality through empty space.
Through its elliptical whole
an heraldic blackbird’s
black wings, yellow beak, round eyes, with the yellow
ring, which defines its inner empty
space.

The opening section introduces the idea that we have a kind of freedom of mind in relation to the meaningless void into which we have been thrown. We project patterns of meaning — the “cones” or “hemispheres” that the final line defines as “thoughtforms.” The second stanza, through its comparison of the projection of “thoughtforms” to Charlie Parker’s improvisations, asserts that the meanings we make take on significance through our own will: they work as variations on our original act of thought, just as Parker’s solo returns to, and makes variations on, the initial statement of a musical theme. In the final stanza, Sonnevi implies that our projection of discursive meaning onto a meaningless void leads to self-definition. The pattern we project — here, an heraldic bird — defines the limits of our inner space, against the void beyond. While the poem in its Swedish original dates from 1965, the attitude toward meaning and language looks like the product of an earlier decade. It seems embedded in a pre-structuralist, existentialist paradigm of meaning. Rather than seeing meaning as something generated by a system of signification larger and more powerful than the individual speaker, the poem looks at the individual as the heroic creator of meaning in a world empty of significance.

Images from Sonnevi’s poem haunt the long poem Matthias began a year after publishing “‘Void Which Falls Out of Void,’” “Northern Summer.” And, as a reading of “Northern Summer” makes clear, Matthias’ attraction to the poem was in some sense a negative one, in which Matthias was drawn to Sonnevi’s poem as an example of an antithesis to his own position. The poem begins by taking lines from Sonnevi’s “‘Void Which Falls Out of Void’” as an epigraph and then breaks into lines that seem, at first, shocking in their banality. Matthias has really lost it, one thinks, reading his initial description of the castle at Wemyss. The castle, he tells us,

Occupies
a picturesque
commanding strong position
on the summit of a cliff some forty
feet in height
the base of which is covered
up at flood tide by the waters of the Forth.
Large, magnificent, commodious
with rock nearby and wood and water to afford
the eye a picture of a rare
and charming beauty
forming a delightful and romantic spot…

We’ve been had though, as the next lines make clear, to the great relief of the reader. Matthias has been quoting a source chosen for its banality, and he is about to let us in on his trope:

…the sight of which
could not but amply compensate et
cetera
the language of a tour book
threading aimlessly
through sentimental empty space.

The last line resonates with Sonnevi’s poem and implicitly criticizes Sonnevi’s view of language and meaning as the products of our will, exercised in a world void of previously inscribed significance. Language that operates as if in a void is seen, here, as unmoored and insignificant, the merest flight of sentiment.

Matthias’ proposition for an alternative to such emptiness, involves a turn to history — specifically, history as embodied in its documents to give language a meaning and resonance that it cannot have in the ahistorical nattering of a sentimental tour book. Matthias suggests, in this case, turning to the words of Edward the First, the English King who fought Robert the Bruce for dominion over Scotland:

Or build on, say, an Edward’s language
to his dear and faithful cousin
Eymar de Valance
like a second generation builds upon
the ruins of a first?

Language
moving upon consequence
Consequence
upon a language: Flight
of an heraldic bird
through space that is inhabited.

Matthias sees a world comprised of space always already inhabited by significance, always already written over by the discourses of power (“language/moving upon consequence”). If we mistake our condition and fail to see the discourse of which we are a part we risk empty sentimentality and insignificance (in which all we're left with are the sentiments and scenes of Altieri's "scenic mode"). The very real physical place in Scotland where Matthias finds himself has a history conditioned by linguistic acts (the destruction mandated by Edward’s words). Language has already had consequences in the space Matthias quite literally inhabits: he is not, in good faith, able to see it as void of previously inscribed meaning. If knowing the history of power and its discourses does not exactly set Matthias free of power, it does save him from empty sentimentality and a language of exhaustion and cliché. Matthias’ turn to historical text in “Northern Summer” is an act of understanding tradition — of knowing how the discursive space has been inhabited.
As Matthias examines the textual history of his place through reading historical, literary and political documents he discovers that, ironically, much of the material that has filled the discursive space of the region has been the product of those who think they face an uninhabited space. In this process Matthias reaffirms his conviction that “The flight of Sentiment/is through space that’s occupied” and that he is a “guest/of both the present and the past,” always interpolated into the discourse that has made him and has filled the space that Sonnevi saw as empty.

The working through of a specific past through real documents, and an examination of the particular ways in which language has produced and been conditioned by history and power make up the bulk of the rest of the (long) poem. This is a matter of contingent difficulties -- not without lyrical passages -- and seems to me to represent a fruitful direction for poetry now, when the once-resistant poetics of indeterminacy has become a matter of phrases (to use Josh's phrase) "meeting cute."

Posted by Archambeau at 2:30 PM