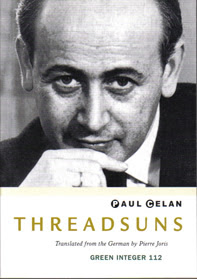 Last night, in a break from my usual wild-ass Wednesday night of ordering Chinese food and seeing what kind of Netflix residue has washed up on my shores, I hoofed it down from the burbs to the glorious city of Chicago to hang with the local poets and talk Paul Celan. When I finally figured out the intricate system of buzzers that allowed me into Garin Cycholl's inner sanctum, I rallied with Garin, Mike Antonucci, Ray Bianchi, Bill Allegrezza, Jennifer Scappettone and Stefania Heim and, suitably rallied, set out to scale the heights of Celan's Threadsuns in Pierre Joris' translation. Since Ray put this whole thing together and bought a cake, I can't hold it against him that he forgot to print out Pierre's responses to the questions we'd sent him by email — and I'm sure Ray will be passing those around when we get together to talk Vallejo in a few weeks. I'm looking forward to them, since comparing various translations left us with more questions than answers, despite an emergency phone call to our German language consultant.

Threadsuns is an opaque work, even for Celan, and a lot of our discussion centered on the nature of the opacity. Allegrezza threw down the gauntlet by declaring that he felt Celan's mental health at the time of composition (which was sketchy) and his subjection to electro-shock therapy (which was appalling) played into the book's fragmentation. I'm sure there's some way that these experiences enter the poems, but I tend to see this at the level of image and theme more than at the level of fragmentary form. I'm too late-afternoon fried-out to type up a long poem, but here's a short one from Joris' translation of Threadsuns that seems to me to reference Celan's mental-hospital experience:

Okay, it isn't exactly One Flew Over the Cuckoo's Nest, but among the various fields of reference, there seems to be something of the normalizing/therapeutic form of psychology ("the excavated heart" and all that). And Celan doesn't seem too keen on this instrumental view of psychology.

And this brings me to Adorno. I know, I know, I've been reading Adorno, so the answer to any question I'm asked lately seems to be "negative dialectics" As in the following exchange:

Local Guy: "Hey Archambeau, what do you figure the Bears are going to do in the Superbowl?"

Archambeau: "Negative Dialectics, man! There're going to take the notion of the totalizing instrumental reason of the Colts' defence and seek out its fissures and disunities and... hey — where did everybody go?"

Anyway, in reply to Allegrezza's thesis about mental health and fragmentation, I made some semi-articulate claims about the extreme crypticness and fragmentariness of Celan's late-period poetry, most of which I cribbed from an old listserv post by Clifford Duffy, from back in '98. Here's an edited version of Duffy's post, in which he claims that Celan's fragmentary and cryptic work is, in essence, a stylistic reply to a criticism made by Adorno (I've edited this down a bit, and left in the eccentric punctuation — remember, this was written as an email, not a formal piece of writing):

In the early 50's Paul Celan published his poem ** Death Fugue ** . This poem became very widely read and universally accepted as a powerful statement 'about' the death camps of Europe. The poem is exacting, intense entrancing, and excruciating. It pushes to an extreme an emotional response that the reader undergoes while reading it…. Sadly by the early 60's the poem became so widely antholgized in Germany and had become a standard part of the learning of German children in Western German education. I say sadly because of this. The poem by sheer dint of repetition had lost some of its intensity and had (through the abuse it has been subjected to, and as the biographer of Celan infers, Guilt on the part of the generation of teachers and educators 'teaching ' this poem to their children) had become a standard' tool of analysis. …. It got to the point where school children in Germany used it to analyze metrics effectively undermining its meaning and its impact. …It has its place. -- But the Poem was diverted from its path...When ** Death Fugue** was published Adorno read it and said in a written statement. This is too beautiful One cannot write Beautiful poems about the Holocaust. One can only be silent in the face of what happened there. …. The effect on Paul Celan from what I have read was very strong, if not close to devastating.

In this view, Celan's choice of fragment, arcane reference, and the like, are strategies of refusal: he doesn't want the poems to be appropriated into generic tools for the learning and teaching of conventional poetic techniques like metrics. I'm pretty convinced, really. I'm also about to miss my train, so I'm outta here.

Posted by Archambeau at 4:33 PM No comments: