Aesthetics as Ethics: One and a Half Theses on the New Criticism 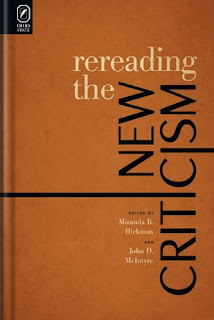 Great news!  You can now pre-order ReReading the New Criticism, a book edited by Miranda Hickman and John D. McIntyre, to which I contributed a chapter called "Aesthetics as Ethics: One and a Half Theses on the New Criticism."
Other essays include:
“Eliot, The Agrarians, and the Political Subtext of New Critical Formalism” by Alastair Morrison

“Androgyny And Social Upheaval: The Gendered Pretext of John Crowe Ransom’s New Critical Approach” by Aaron Shaheen
“The Fugitive and the Exile: Theodor W. Adorno, John Crowe Ransom, And The Kenyon Review” by James Matthew Wilson (my fellow Notre Dame alumnus)
“No Two Ways About It: William Empson’s Enabling Modernist Ambiguities” by Bradley D. Clissold
“In Pursuit Of Understanding: Louis Untermeyer, Brooks and Warren, And ‘The Red Wheelbarrow’” by Connor Byrne
“Through Fields of Cacophonous Modern Masters: James Baldwin And New Critical Modernism” by Adam Hammond
“Disagreeable Intellectual Distance”: Theory And Politics in the Old Regionalism of The New Critics” by Alexander Macleod (fellow Canadian and Notre Dame alumnus)
“Teaching with Style: Brooks and Warren’s Literary Pedagogy” by Tara Lockhart
“A Kind Of Dual Attentiveness”: Close Reading After The New Criticism” by Cecily Devereux
“Toward a New Close Reading” by the volume’s editors, John Mcintyre And Miranda Hickman
Here are the first two paragraphs of my contribution:
If I had believed everything that I was told about the New Critics when I was in graduate school, I suppose I would have been more or less prepared to conclude that they were a nefarious crowd of reactionaries, yearning for the good old days of a slaveholding American South while tuning out the wailings of the oppressed in order to relish a particularly convoluted irony, paradox, or poetic ambiguity. Among other things, I was told that the New Critics disdained Romanticism in favor of the complex ironies of the Metaphysical poets; that they were aesthetes, concerned with form but not with ethics; and that they had nothing in common with Continental literary theory, which spoke to our current condition in a way the New Critics simply could not. Such representations were not without an element of truth to them, of course: Eliot’s downgrading of the Romantics in favor of Donne & Co. was real enough, as was the turn to text over context in W. K. Wimsatt’s The Verbal Icon, and no one would confuse the political dreams of the Fugitives with those of the Frankfurt School (or, for that matter, the prose of Robert Penn Warren with that of Theodor Adorno).
Contrary to what I was told, though, it turns out that the New Criticism is in fact part of a long tradition of ethical thinking, a tradition that, in an apparent paradox, is ethical not despite, but because of, its insistence on aestheticism. Moreover, in an irony of a different kind than that so savored by the authors of Understanding Poetry, this tradition is fundamentally Romantic in its origins and characteristic gestures of thought. So my first thesis here is that the New Criticism, contrary to received opinion, is an ethically based criticism. My second thesis, which is really only a half a thesis, deeply provisional in recognition of how much further work needs to be done before it could be fully embraced, is that New Critical thinking may prove to be an important kind of ethical thought for our time.


[*I should add that while I claim in the essay that no one would confuse the political dreams of the Fugitives and the Frankfurt School, I have in fact deliberately done exactly that elsewhere.]
Posted by Archambeau at 3:02 PM No comments: