The (Old) Medium is the Message: Interpreting the Boston Bombing Spectacle

When I turned on my television today, Marshall McLuhan’s famous saying “the medium is the message” hit me with the full force of a newspaper hurled directly into my face by the last old-school bicycling paperboy in America.  Here’s the image I saw: 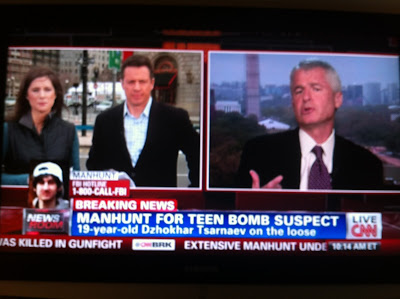 It’s a pretty typical bit cable news imagery: a pair of feeds, one from our hosts, one from an expert, and down below the ubiquitous network identification graphics and tickertape-style news crawl.  Nothing unusual at all in the format, and certainly nothing as attention-drawing as the content under discussion: the manhunt for a recently-identified bombing suspect, currently on the lam from the combined forces of local, state, and federal law enforcement.  To steal a pair of terms from art history, the figure here, the thing meant to be noticed and focused on, is the search for the suspect; while the ground, the material meant to serve as a presentation platform for the figure, and not to be noticed for itself, is the graphics/news crawl/split screen array.  But there’s actually much more going on with the ground than with the figure.

Consider the relatively static nature of the figure: while coverage has been nonstop for several hours, developments in the story during the 20 minutes or so I watched the news broadcast were nonexistent: a suspect had been identified and was being sought by law enforcement.  No information beyond that came to light.  But the presentation is all about the up-to-the second nature of the live broadcast, and the presumption built into the idea of a live analysis coupled with a text-based newsfeed is that there is an enormous amount of information to be processed, more than could be encompassed by a single information channel (like the hosts alone, or the crawl by itself).

The distance between the assumption of the format (massive information overload) and the actuality of the situation (little information, and nothing new coming in) shows itself most starkly when we consider the tremendous redundancy of the information being conveyed.  What, after all, do we actually get here?  Even when we leave out the oral information provided by the hosts and their guests, we see a huge redundancy in the visual information in the screen shot above.  For example, we can read not once, not twice, but three times that there is a manhunt in effect.  Moreover, we are told that this is “Breaking news,” that it is “live,” and that the news comes from “@CNN-BRK” — with the “BRK” signaling the live or breaking status of the story.  We’re reminded twice that this is coming from CNN (or three times, if you count the “NewsRoom” logo as a brand identifier).  If there’s information about the actual story to be conveyed, we’re getting it many more times than we need it in this particular moment.

Of course the main thing that’s being conveyed in all of this redundant messaging pertains to something other than developments in the story of the Boston bombing suspect.  As the grand old man of communications theory, Marshall McLuhan, would put it, the medium is the message.

One of the things McLuhan argues in his study Understanding Media is that new kinds of communications media give us a “change of scale or pace or pattern” in how things are represented, and they communicate the nature of this change.  When 24 hour cable news came along, it created a change in the pace of news: things were continuous, now, and instead of getting a daily download of information during the evening news hour or while reading the newspaper over one’s morning coffee, one could, or perhaps should, be ready for coverage of news developments as they happen.  This was a big deal back in the 1990s, when the Gulf War became the first notable round-the-clock media spectacle.  But now, a couple of decades later, all cable news is an old medium, and has to be seen in the context of the rising medium of internet-based news.  Just as the rise of television changed the nature of radio (when was the last time you tuned in for a radio drama?), the rise of internet news has changed the nature of cable news.  We can, after all, use the internet to check in on any story at any moment.  If we want breaking developments, we can get them when we want them, minute by minute or at any convenient moment—we don’t have to stayed glued to a cable news screen, fearing we might miss something.  What had been cable news’ great strength—its up to dateness —is no longer its exclusive property.

So what happens?  Cable news seeks, in its very ground of presentation, to give a sense of its own continued value by stressing the excitement of itself as a medium.  The barrage of information via graphics, news crawl, and split screen commentary exists to imply that there is a lot going on, too much for mere text or images or talk alone to contain — the implicit idea being that cable television news is both current and exciting, and capable of capturing rapidly evolving stories more fully than any other medium.  The fact that stories tend not to develop all that rapidly, and the fact that all the information one could possibly desire will be available on demand on one’s tablet, laptop, or phone doesn’t matter—or, rather it does.  It is the fact that the jazzed-up multichannel television news broadcast is responding to, by amping up the idea that we need a full-on multi-level, multi-genre television feed to really stay on top of things.  What we’re looking at, when we look at a cluttered news screen like the one above, is something like the wrinkled skin and age spots of a once-young medium.  What we’re witnessing isn’t just a news story: it’s a news medium entering middle age.