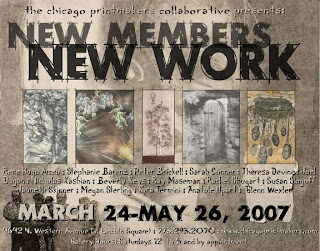 We're just past the middle of the spring semester in my leafy corner of academe, and you know what that means, don't you, class? Yep, that's right: this is the time of semester that devours my soul and crushes my spirit. One side effect of all this is that my blog has been reduced to a string of short entries and announcements, and today's entry is no different — but if you're in Chicago, I really do urge you to check out the event I'm annoucing: a show at the Chicago Printmakers' Collaborative that runs from tommorrow through late May. It features work from a host of young, hip printmaker types, including Sarah Conner, who has worked with me on a series of prose poems/prints called The Kafka Sutra. The prose poems are kind of what you'd guess they might be from the title: Kafka's parables rewritten as if they were the Kama Sutra. Conner's prints go beyond being mere illustrations to the writing, I think, and can stand on their own without the text — but booklets featuring some of the prose poems will be available at the show, so come on down and get your neo-Kafka on for free. The show is at:

Posted by Archambeau at 12:42 PM No comments: Rejoice! The latest Notre Dame Review is out, and there's almost too much to love. From the very cool cover photo by Catherine Gass (whom I met when she came up to the &NOW Festival to hear her dad, William Gass, read), to the reviews in the back (lots of good stuff, including Christopher Merrill on Merwin, and Igor Webb on the ever-amazing John Peck), it's a rock-solid issue, and admirably diverse. Poems by W.S. Merwin, William Logan, Michael Anania, John Peck, and Jesper Svenbro, among many others (if you read only one Swedish poet, it should be Svenbro, so give your transations of Tomas Tranströmer one last, yearning look, and set them afloat on the icy blue breakers of the Baltic). The issue also contains new work by Chicago's own Kristy Odelius, whom we've just convinced and cajoled and arm-twisted into coming up to Lake Forest for the Lit Fest this April (she'll read on the 17th). And, for those of you who've had enough excitement, there's my essay "The Protestant Ethic and the Spirit of Poetry," perhaps an anomaly in this (ahem) most catholic of journals (it's probably for the best if you wince at that).

Posted by Archambeau at 1:40 PM No comments:

Email ThisBlogThis!Share to TwitterShare to FacebookShare to Pinterest
Labels: annoucements

We Interrupt this Broadcast for a Bulletin from Ancient Sparta 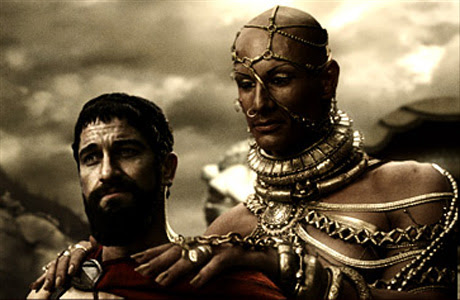 So there I was, at the age of ten or eleven, sitting on the floor of my parents' weekend place in the Canadian wilderness. I had a perfectly functional tree fort outside, I had a canoe and fishing gear at my disposal. These being delightfully unenlightened years, I had an air rifle in my arsenal. I had a couple of Cree Indian kids as friends, causing much envy among my city pals, who imagined me in mocassins, creeping like a miniature Hiawatha through the underbrush. There was even an abandoned gold mine nearby, entirely verboten but easily accessible if you knew where to squeeze through the fence. But was I going to take advantage of any of these things? Not a chance, ace. I had a brand new book of world history, and I wanted to see if its illustrations of the battle of Thermopylae were going to be as mad-ass, awe-inspiringly cool as those of my other big book of world history, a book I'd pretty much destroyed through excessive and overzealous reading and rereading.

I say this to establish my credibility as an ancient history geek of many, many years standing. This goes deep with me, muchachos, deep.

So I know what you're thinking. You're thinking I'm going to rain on the big, fabulous, over the top parade that is 300, the new movie about Leonidas and his 300 Spartans at the battle of Thermopylae. You're thinking I'm going to list a thousand historical innacuracies of interest to no one but the most dire literalist. But seriously: I don't mind most of the liberties the filmmakers took with the story. You want to ditch the armor to go all-out with the chiselled Spartan abs? No problem. You want to make Xerxes into an actual giant? Sure, why not. Go nuts. No harm no foul. You want to cash in on Warholian Minute 14 of the whole body-piercing thing and make the Persian leaders look like they got drunk in the West Village on a Friday night and woke up looking like punked-out pin cushions? Hey, I'm down with it. I mean, you've gotta make the Persians look exotic, as they would have to the Greeks. (Of course the Persians looked exotic to the Greeks in no small measure due to their curious and foreign habit of wearing pants, but that's just not going to look weird to the avergae chino-wearing soccer dad at the multiplex, so the whole piercings-for-pants substitution can be seen as a legitimate act of translation).

What gets all up in my ancient-history-lovin' grill is this: the movie lies about the nature of Spartan society in ways that come too close to the kind of lies we hear about our own country in contemporary America. I just can't get past this in the name of fun & games the way I can get past Giant Xerxes or the Abdominizer Army. Let me explain.

You might wonder why a military powerhouse like Sparta could only field a paltry 300 soldiers. With so much at stake, why would the Spartans send the equivalent of about two infantry companies? There's a movie answer, and there's a real answer, and between the two lies a giant gulf.

The movie answer is this: the Persians bribed Greek priests in order to get the Oracle to say that the no army should be sent during the sacred Karneia festival. Despite these weak-willed, treacherous, peacenik enemies-at-home, 300 heroic Spartans are willing to defy the Oracle and Fight the Good Fight for Freedom.

The historical answer is this: Sparta was a brutal slave-state, and the ruling warrior class was in more-or-less constant fear that the Helot slave-class would rebel and win their freedom. Sparta couldn't spare many troops, becuase their own society was fraught with inequity.

So the movie masks a real class struggle and national disunity with — well, with what? With unthinking nationalism, and repeated (and unintentonally ironic) cries of "freedom!"

You, there, with the Dell laptop — I can hear you mumbling "You can handle a giant Xerxes, but you can't handle this?"

Yeah, I suppose that's true. I guess it's because I don't live in a country with a heavily pierced giant as president (which, you've got to admit, would probaby be an improvement). The things that bother us — unthinking nationalism, a complex, tragic war justified with too-simple shouts of "freedom" — have to be closer to home.

Posted by Archambeau at 9:06 AM No comments: 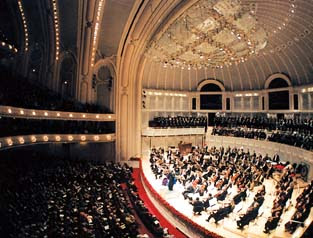 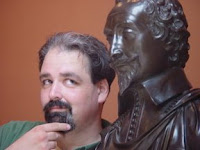