Monkeys, Wrenches, and the Discursive Situation of Poetry 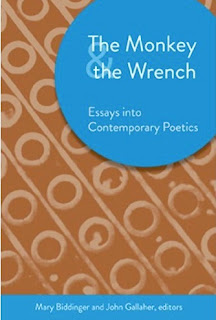 Rejoice!  Mary Biddinger and John Gallaher's new collection of essays on poetics, The Monkey and the Wrench, has finally appeared (at least in my mailbox, where a set of contributor's copies arrived today).  Not only does it look good, its svelte 175 pages contains a wealth of good stuff for anyone interested in contemporary poetry and poetics, including:


The only defilement of this otherwise excellent volume is my own contribution.  It's called "The Discursive Situation of Poetry," and it attempts to explain why poetry has declined in popularity and influence since its heyday (which was not when most commentators think it was).


The Discursive Situation of Poetry


Well, I go on from there for quite a while. But fret not: I don't argue against MFAs, or against poetry mattering — but I do try to look at the conditions under which poetry is hugely popular, and those conditions usually entail a lot of social negatives.


Anyway, don't let my contribution prevent you from getting the book!  Copies are a laughably cheap ten bucks at Amazon, Barnes & Noble, or actual bookstores, if they're hip.
Posted by Archambeau at 8:18 PM 17 comments: