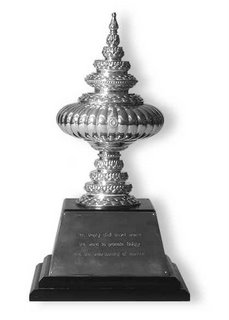 Since the Schmoozie award for most egregious self-promotion at or near the AWP was awarded a week ago (see my post of March 12), there's been a huge (okay, a moderate) outpouring of interest. Among the various emails asking me to reveal the full name of the winner, and the others guessing (mostly correctly) his full identity, there were a few asking about the criteria for the award. Since we at the Academy of Literary Conference and Festival Arts and Sciences stand for full disclosure and transparency, I here reveal the scoring system of that venerable award, The Schmoozie.

Feel free to print up score cards to use at any MLA, MMLA, AWP, MSA, or other acronym-bearing conference. The system can also be used at poetry readings, such is its versatility.

Minor afftonts to decency have a low point value:

The following phrases all have point value:

Major affronts have point value appropriate to their egregiousness:


Finally, there is a variable point value to be awarded for anyone who rises, after a presentation, to ask a question that is not in fact a question, but rather a rambling speech, the primary purpose of which is to hear the melodious sound of one's own voice echoing through the hallowed air of the lecture hall.

The Academy of Literary Conference and Festival Arts and Sciences perpetually strives to improve its system of ratings, so please do not hesitate to add new categories based on observations of conference affrontery. We count on your field research!

Posted by Archambeau at 8:24 AM No comments: