Map of the Hydrogen World 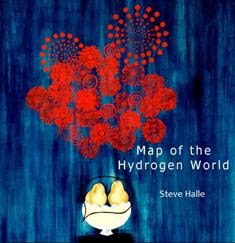 Steve Halle's new book, Map of the Hydrogen World, is just out from Chicago's own Cracked Slab books, and you're out of your mind if you're not already on your way to order a copy. Halle's got pretty much everything you'd hope to find in a younger poet: a sense of urgency, an easy grasp of tradition, and an adventurous sense of experiment.

I want to dwell on this last bit just a little, because I think Halle is truly experimental, at a time when the idea of experiment has become muddied. It's sad, and ultimately ironic, that words like "experimental," "complex," "difficult", and "indeterminate" are, in some quadrants of the poetry demimonde, not so much a shorthand for idiosyncratic adventure, but more a brand-name, a sign of membership and even conformity. Johannes Goransson gives us an image of the time and place where this started to happen in his reflections on his experience at the Iowa writing program:

Lots of people bantered around the phrase "post-language poet" - as in "I am a..." This means that they - like Jorie [Graham] - used some of the textures of langpo to recreate high modernism, elegance, high learning - as opposed to ... "Images" which were vulgar and had to be controlled against their natural tendency toward excess; "confessional poetry" was ridiculed; "indeterminacy" was important... because it was "complex" and thus more "realistic." I remember a debate I got in because someone called something (not mine) "pornographic" because it wasn't complex...

Yikes. I mean, there's the sad logic of competitiveness/conformity that you get when people study at the feet of some charismatic teacher, with hopes of finding a respectable post in a semi-regulated profession. There's actually a pretty good book about how the best outburts of artistic creation take place among groups of peers without charismatic masters or hope of professional placement. It's called Collaborative Circles: Friendship Dynamics and Creative Work by Michael P. Farrell, and someday, in the unlikely event that I get my act together and clear the decks of other writing commitments, I'm going to read the big Langpo group autobiography Grand Piano and see whether the experiences recounted there confirm Farrell's various hypotheses, one of which is that the charismatic master, or group of masters, can end up establishing a style that the students don't really understand, or feel compelled to use for any reason other than that it is what they think they're supposed to use. It's a problem that can afflict even the most groundbreaking of creative figures in their early years: I remember reading about Andy Warhol's first soup-can works, which were spattered with paint drippings in the Jackson Pollock mode. When someone asked him why he added the paint-spatters, he told the man that he thought that's what you were supposed to do to make it a work of art. The things that Pollock struggled for, and that meant everything to him, were to the young Warhol just a kind of credential, a sign that he wasn't just a kid from the benighted side of Pittsburgh, but a Member of the New York Art World in Full and Good Standing. Tradition does tend to be govered by entropy.

Anyway: my point is that Steve Halle's not one of these "I'm experimenting the same way everyone's experimenting because that's what you're supposed to do, right?" guys. Perhaps it was to his advantage that he didn't really have a particularly charismatic teacher in his undergrad days (when he studied with, um, me), and now that he's plugging away at grad school after a stint teaching, he seems to have a pretty firm sense of himself (besides, Gabe Gudding, his prof now at Illinois State, seems laudibly eclectic, and not in quest of disciples). So Steve's work doesn't really look like period style, and there's an interesting combination of techniques and influences at play in Map of the Hydrogen World. The jacket copy provided by the publisher gets at some of this:

Map of the Hydrogen World, Steve Halle’s first collection of poems, shuns the so-called divide between post-avant and Official Verse Culture poetics by embracing traditional forms and themes while simultaneously developing new ways of knowing and working through poetry. From traditional lyric and narrative poems to formal experiments, investigations and cuttings, Halle attempts to find his own way through place, history, art, politics, faith and self, mapping particulars as small as an atom and universalities as big as a world.

I try to drive a similar point home in my own bit of jacket copy:

Ginsbergian incantation, high modernist allusion, the post-avant rhizome and the documentary collage — these are the weapons in Steve Halle’s arsenal. Joyce, Eliot, Emerson, Whitman and Keats shoot through the static of text-messaging, global positioning systems, surveillance culture, and an urgent sense of the world’s victims. Halle carries a humanistic heritage into an inhuman world. It comes out shredded, torn into the bandages we need even more than we know.

Okay, so I kind of let that extended metaphor have its way with me a bit. And I failed to work in any reference to the strong Dada strain in Halle's work. So let's move on to another bit of copy, this one by Steve's most charismatic teacher, Anne Waldman:

Delightful voices and moves play out in the latitudes & longitudes of Steve Halle's Map of the Hydrogen World. Edgy with savvy and brio. It's one wonderful exciting romp.

I'm not sure I'd have said "romp" — Halle's book seems a bit more... what? A bit more somber than that, a bit too concerned with the morally urgent world to be called a romp. But don't take my word for it: see for yourself.

Posted by Archambeau at 3:48 PM No comments: