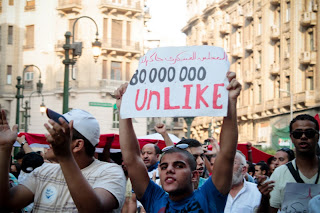 The public sphere, as theorized by Jürgen Habermas in The Structural Transformation of the Public Sphere, is a network of communications in which private individuals can articulate their social needs, eventually forging a broad-based public opinion that is often critical of established authorities such as the church and the state.  When it emerged in England in the eighteenth century, the primary institutions of the public sphere were the coffeehouse and the printed journal: it was through these that private citizens, most of whom had little or no prior access to political power, emerged as a social and political force over the course of the century.  The public sphere, with its critical discussions in person and in print, would eventually become a monitor of power, and even in some sense the leading force in society, making political authorities legitimate themselves before the court of public opinion.  In Egypt, what began with Facebook and Twitter and public assembly in Tahrir Square has grown into a much larger-scale opening of the public sphere, and there is reason to believe that this public sphere will survive the current crackdown, and grow.  In fact, it is in the best interest of everyone in Egypt that it do so, as it would allow for the creation of a court of pubic opinion to which the regime and the leaders of the various social factions could be held accountable.  It is this kind of unofficial court of opinion that made liberalism possible in the nations of the West, and its survival is the best hope for Egypt.  Despite its contradictions, liberalism is a robust plant, and once it really takes root it is hard to get rid of for long.
Posted by Archambeau at 12:20 PM No comments: