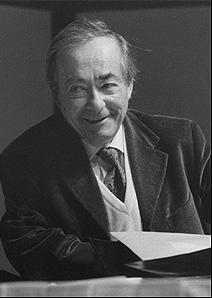 Interesting weather fronts have been moving through some of my favorite layers of the blogosphere. Specifically, there's been an exchange between Josh Corey, Eric Selinger, Mark Scroggins, Mike Heller and Norman Finkelstein (these last two via Selinger's blog) about poetic difficulty. For those of you who haven't followed it, the barest of all possible bare bones summaries would look a bit like this -- apologies to the participants for the reductio:

Josh ruminates over Mallarme, Clark Coolidge, and difficult poetry. He finds that while he is often seduced by indeterminacy in poetry, others are repelled. For him, there's a kind of aura of wonder to the indeterminate. Interestingly, though, he speculates as to whether this kind of poetry may be on the verge of being played out. Eric is sympathetic to the idea (articulated by Norman) that difficult poetry can open a space for a kind of religious mystery, but he's also sympathetic to the complaints his students raise about such poetry, and he wonders about a class-bias to this sort of work. Bourdieu, after all, has pointed out that art that distances itself from purpose or from immediate emotional connection is not well liked outside of the more privileged classes. Mike and Mark raise a number of issues, but what I find most interesting in both of their contributions are the way they raise questions about the different kinds of difficulty (Mike asks about the different funcitons of mystery, and Mark mentions "the difference between difficulties").

Since I've been thinking about these last issues a bit -- and since there's been a bit of a tendency over the last few years to equate difficulty with indeterminacy -- I thought I'd drop in a few notes about kinds of poetic difficulty.

George Steiner wrote a useful essay back in the 70s called "On Difficulty," in which he describes four distinct kinds of difficult poety. I don't have it with me, but if memory serves, this is how it goes:

Contingent Difficulty. This is the kind of difficulty that can be resolved through the presence of a good encyclopedia or perhaps a few minutes with Google. It is the difficulty of facts, or dates, or other bits of information. Much Modernist difficulty is like this -- you need an annotated version of The Cantos, and many (not all) of the poem's difficulties are resolved simply through the presence of footnotes. No amount of staring at the page is going to help you understand Social Credit economics, for example, but the difficulty is resolvable with factual information.

Tactical Difficulty. This pertains to texts that resort to various kinds of coding in order to get past censors, or to put subversive messages into works that, were the meaning manifest on the surface, would get the author (and perhaps the audience) into trouble. So certain kinds of Soviet writing fall into this category, and so do things like many Blues lyrics (it took me years to realize what was meant by the squeezing of lemons or the pulling of daisies, for example, oh innocent prairie boy that I was).

Modal Difficulty. Here's where one of Steiner's phrases sticks with me, because it is so completely unlike anything Steiner would normally say: with this kind of difficulty, Steiner says, the reader finds himself saying "I get it, but I don't dig it." Ah, the seventies, when even a tweedy fellow like Steiner could contemplate wearing a medallion. Anyway, this is actually a very common kind of difficulty in classroom situations: the reader understands what's happened in the poem, but is out of sympathy with the project and rejects it as pointless. How many of us have been teaching classes and had a student make a very perceptive observation in the form of a complaint. "It's like James Joyce doesn't think plot is as important as all this other junk," said a student of mine when we were studying Ulysses. "Right!" I said "exactly!" But of course that didn't solve the problem.

Ontological Difficulty. This is the sort of difficulty that Josh was talking about, I think, when he mentioned awe and aura in his post. Here, the poem is made in such a way that it resists interpretation and maintains its indeterminacy. This is probably the most common form of difficulty in poetry today -- so much so that you sometimes see "difficulty" and "indeterminacy" being used interchangably. Steiner hints at religious experience here, the idea being that the elusiveness of meaning in the poem is homologous with the elusiveness of religious mystery. Nowadays you also hear undecidableness and indeterminacy defended as a kind of noncommodifiable resistance to the market, though perhaps unsurprisingly Steiner doesn't take that tack.

There's still a fair bit of contingent difficulty out there -- if you want to write something more ambitious than the poem of the backyard epiphany, it is probably inevitable. But this kind of difficulty can be cleared up with a little effort online or, for the antiquarians out there, with a reference book. I don't imagine there's a really big need in countries like the USA for much overt tactical difficulty in poetry nowadays: repressive tolerance means never having pretend to toe the line. The big issues of the discussion that's been going on seem to have more to do with a combination of ontological and modal difficulty. That is, many people have a modal problem with ontologically difficult poems.

I think it is fair to say that a lot of the class-based rejection of difficult art comes from a kind of modal difficulty, a simple lack of sympathy with the project. One response to this situation is simply to say "So what? you eat your populist apples and I'll see if I can figure out my mandarin oranges over here in Elitist Alley." Another response is to reject difficult art on the grounds of elitism (one would do well to recall the change in Russian art between the vibrant early revolutionary period of experimentation, and the later stultified bullshittery of the Socialist Realist era before leaping to this position). Yet another is to get all Educating Rita and try to be a missionary for the difficult, with all of the ironies, contradictions and condescensions appertaining thereunto. I suppose I oscillate between the first and the third alternative, without a lot of coherence, and without as much self-reflection as I could have.