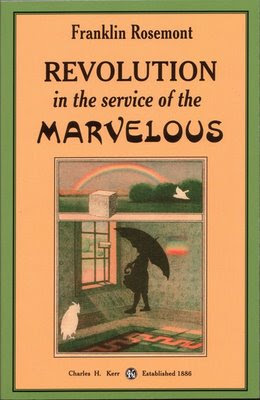 Some very sad news: Franklin Rosemont has died at the age of 65.

Rosemont was the kind of man for whom the epithet "American original" was made. He was the real, true, independent bohemian, through and through: the son of a labor activist father and a jazz musician mother, he was a scholar, an activist, a poet, a publisher, a Surrealist, and a historian, and he was all of these things on his own terms, all the time. I only met him a few times, but every time I did I got a taste of what genuine independence was all about. He didn't hold an academic post, and, since he and his wife Penelope ran the old I.W.W.-affiliated press Charles H. Kerr and Co. together, he didn't have to write with an eye to what a publisher would accept.

A couple of years ago the artist Tom Denlinger and I were teaching a seminar on the artistic and literary institutions of Chicago, and Franklin and Penelope Rosemont were kind enough to drop in. Tom and I had been teaching the history of the Art Institute of Chicago, the Museum of Contemporary Art, Poetry, and the Chicago Review, among other institutions, but the Rosemonts came to tell us about an all-but-forgotten counter-culture, the bohemian world of Chicago's Towertown in the early twentieth century. It was a world where Kenneth Rexroth and Carl Sandburg rubbed shoulders with hobos and Wobblies and all manner of political, sexual, and social dissidents. Rosemont's collection of documents pertaining to that world's central venue, The Rise and Fall of the Dil Pickle is still the best place to get the flavor of a lost world where home-style Dada met midwestern labor radicalism.

Rosemont's commitment to Surrealism ran deep. He met André Breton in Paris in 1966, and later became a leading light of the Chicago Surrealist Group, which published an irregular journal called Arsenal, held international exhibits, and upheld the idea that Surrealism shouldn't be the prisoner of the very artworld institutions it initially protested. Rosemont's edition of Breton's selected writings in English translation, What is Surrealism?, remains unsurpassed.

For me, Rosemont represented a somewhat paradoxical position: classical Surrealism. He was always true to his sense of what Surrealism was about, and for some this seemed like a too-rigid adherence to the ideas of Breton. There may be something to that charge, but let's remember the best side of Breton's Surrealism: the insistence on Surrealism as life, not just as art, the sense of a continuity between labor-centered politics and Surrealist activity, and a conviction that (to use the title of one of Rosemont's books) there must be a "revolution in the service of the marvelous."

Pierre Joris has a fine tribute to Rosemont up at his blog, and the Chicago Tribune has a detailed obituary.

I think it's fitting to bring something else up here, since it's very much in line with the kind of thing Franklin Rosemont believed in, and the kind of commitments he lived out. Zena Sakowski (with whom I went to high school, and whose father was a colleague of my dad at the University of Manitoba's School of Art) has continued a long string of Situationist-style radical art/life actions by opening the Chicago Free Store, which she describes as "a nomadic, temporary free store that irregularly visits a variety of Chicago neighborhoods." If you're in the Chicago area, be sure to check it out. 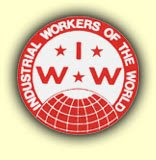 Posted by Archambeau at 12:41 PM No comments: