The Word From Tulsa: Blogging the MSA 8, Part One 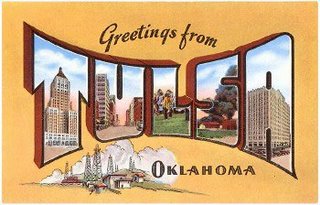 You know, the last time I attached the phrase "part one" to a post, I never quite got around to creating a "part two," so I know I'm on thin ice in labeling this, my dispatch from the eighth annual Modernist Studies Association conference in Tulsa, Oklahoma the first part of a series. But I intend to write daily dispatches from the trenches of the Doubletree Hotel. Honest.

Eric Hertz, an old pal from grad school, jumped me at O'Hare, and at the Tulsa luggage rack I ran into Jim Hansen, another old Notre Dame guy. Together we trucked it in to the hotel, where we hooked up with Grant Jenkins, last seen dancing samba with Cate Ramsden at the Miramar bar after the &NOW Festival.

Despite the cameraderie, though, I feel a little foreboding about the conference, which gets underway in earnest today (actually, the 8:30 a.m. sessions are well underway, but the unshaven and otherwise unpresentable Archambeau still lingers over his crappy room-service coffee, so enfeebled hath old age rendered him etc.). Why foreboding, you ask? Well, for one thing, it looks like the poets have largely abandoned the MSA. The conference used to get a healthy dose of the language poetry crowd and their poetic and critical fellow-travellers: you'd find yourself in the elevator with Bob Perelman, Barret Watten, Susan Howe and Charles Altieri. Watten's still here (we'll be reading together along with illustrious others tomorrow night), and so is Benjamin Friedlander, but by and large the actual living writers and the people who hang with/write about them seem to have given up on the conference. I'm not sure why, but I think the trend is real: my colleague the freakstream novelist, used to come to the MSA but has given it up, saying "I just don't like those people..." So that's evidence for foreboding point number one: fewer poets, plus more people who define themselves by having a specific field of study, equals Bob wondering whether this may be turning into another big standard academic gesselschaft festival, along the lines of the MLA and its regional offshoots.

Foreboding point number two has to do with the conversation at the expensively catered, big-ass opening reception last night. Don't get me wrong: I talked to some cool people, yukked it up happily, and learned a few things, most notably from Jim Hansen, who knows a lot about Adorno, and who may start up a blog to get in on the red-hot prof-on-Adorno action on Culture Industry, Pravda Kid and my own humble blog. I nattered away to him about things various, including my new work on the conundrum of the poet since the advent of full-scale aesthetic autonomy, and he pointed out that much of Beckett's work is a kind of dramatization, even a burlesque, of the idea of the autonomous artist's predicament (being free but isolated and possibly, just possibly, useless to the world). All those verbal artists of Beckett's, buried up to their neck in sand or living in trash cans, yearning, from their isolation, for some connection to the world or some definite purpose. Great! I'm going to have to riff on this for a few pages in my next book. But intriguing talk of Beckett aside, I heard, and overheard, and took part in, a distressingly large number of conversations of the genre I suppose we could call "l'anxiété d'académie."

What's this anxiety all about? Well, I suppose I use the French terms to draw a kind of parallel between academe today and the French academic painting establishment of the late nineteenth century. I mean, I kept running into people who were fretting about pleasing the powers-that-be in their particular institutions: they expressed their anxieties variously. Examples include:

Posted by Archambeau at 3:20 PM No comments: