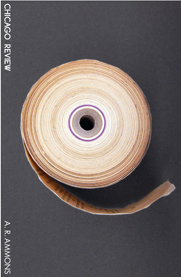 Hot news!  The latest Chicago Review is out, devoted, for the most part, to the poetry of A.R. Ammons, including previously unpublished poems, a never-before seen interview, and a host of critical essays (including work by John Wilkinson and Simon Jarvis, indicating that the Chicago Review continues to serve as the leading American venue for work by the Cambridge school of Prynne-influenced poets).

Lurking in the back, though, you'll find a little piece I wrote on another topic — the Gnostic poetry of Peter O'Leary and Norman Finkelstein.  This follows on the Chicago Review's earlier publication of what amounts to O'Leary's manifesto for Gnostic poetics, and comes between panels on Gnostic poetry at last summer's Orono conference and next February's Louisville conference (here's my contribution to the Orono conference, a paper called "History, Totality, Silence").

Here's the beginning of the piece:


Around the time Peter O’Leary’s Luminous Epinoia was published, another piece of his writing appeared in the pages of this journal, an essay called “Apocalypticism: A Way Forward for Poetry.”  Part memoir, part polemic, part literary appreciation, the essay argued that apocalypse—a sacred expression that can “unbind love from material desire, freeing it to embrace the unknown and the unspeakable”—has been erased from American poetry.  In O’Leary’s view, neither the old school of the workshop lyric nor the tradition of Language writing supports vatic or visionary poetry.  O’Leary’s own recent work, along with that of Norman Finkelstein, constitutes a strong argument for the vitality of this project. O’Leary, Finkelstein, and a number of other poets—one thinks of Pam Rehm, Michael Heller, Harriet Zinnes, and especially of Joseph Donahue and Nathaniel Mackey—make formal and conceptual links to this deeply rooted poetic tradition, which extends back through Duncan to Yeats and Blake.  In our formally diverse but overwhelmingly secular poetic moment their work represents a true counter-culture whose achievement has yet to be fully appreciated.

Peter O’Leary’s Luminous Epinoia is a book of many things: surreal fables, reflections on sacred architecture, sermons on the meaning of love in a time of war, and the occasional jab at the policies of the Bush administration. (Its shiny, silver, jacketless cover embossed with religious symbols is also striking.) But most of all, Luminous Epinoia is a book concerned with incarnation.  Its title comes from the Apocryphon of John, a second century Gnostic gospel, where  the “luminous Epinoia” is a heterodox version of Eve, a physical extension of Adam and a helper who will restore to him the full, creative vision of religious experience. O’Leary’s book takes a strong influence from the great Catholic theologian and paleontologist Tielhard de Chardin, who reconciled his scientific and religious beliefs through imagining the physical universe as imperfectly embodying aspects of the divine, and looked at biological evolution as a teleological process bringing us ever closer to a union with God.

Like O’Leary, Norman Finkelstein looks back to a legacy of Gnostic American poets: his 2010 book of literary criticism, On Mount Vision: Forms of the Sacred in Contemporary American Poetry is the best and most current outline we have of this tradition. Like Duncan, Finkelstein often turns to the serial poem; like Jack Spicer and Armand Schwerner, he combines spiritual impulses with comic gestures. The connection with Schwerner runs particularly deep: Finkelstein emulates Schwerner’s focus on the mediation of spiritual knowledge by oral and literary traditions prone to fragmentation, distortion, decontextualization, and creative revision. Finkelstein’s work reveals the way an unseen world presses into our own experience: in his work, revelation is immanent, just beneath the surfaces of things.


More information on the issue can be found here.  And the entire piece on O'Leary and Finkelstein can be found in pdf format here.

Posted by Archambeau at 1:35 PM No comments: