Of Schlubs and Tweedy Motherf*ckers: How Profs Dress 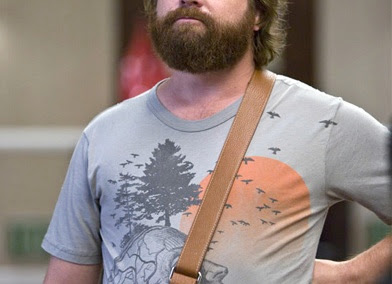 It’s been a while since I heard from the jittery fiend who calls himself Raskolnikov P. Firefly, a former colleague of mine long since gone AWOL into the wilds of the extra-academic world, but this morning I found what appeared to be one of his dispatches. Imagine my surprise to see it there, when I opened my box of crullers from the Dunkin’ Donuts drive through: a yellowed manuscript with several cigarette holes and the un-definable odor, something between curry and cat-piss, redolent of Rasko’s old office out near the Buildings & Grounds headquarters, the office he held on to until security removed him from campus after an incident too horrifying to report here in any detail. It seems his research interests have changed: while once he was concerned to catalog the rich twits of Chicago’s north shore, he has now returned to his academic roots, preparing the following document on the sartorial habits of the academic tribe. Behold and wonder.

An Aesthetico-Anthropological Prologomenon to Further Inquiry into the Clothing and Appearance of the Professorial Hominid: Preliminary Researches and Findings

Lurking in the well-tended juniper bushes of land-grant colleges, squatting beneath the faux-gothic gargoyles of Californian technology institutes, rushing unapprehended through painfully air-conditioned corridors in brutalist concrete administrative annexes, and cadging untended tamales in cafeterias. Supplemental research from behind the dumpsters near faculty lounges, and, once, from behind that dieffenbachia you’re looking at.

The apparel and physical presentation of the professorial ranks in Anglophone countries (European funding not yet having been forthcoming, except from the ill-kempt nations of the Baltic coasts) can be classified into nine categories, each of which is correctly subdivided into two subordinate taxonomical categories. Viz.:

You have seen him in his rumpled cargo shorts and comic-book t-shirts, his filthy sneakers and his soiled athletic socks. In winter, you have seen him substitute filthy army pants or Carhart work trousers for said shorts. You have seen him dress up for formal events and funerals by throwing a stained and buttonless suit jacket or an unevenly worn corduroy jacket over his existing outfit. You have not seen him shave, for his is the freedom, the glorious autonomy, of the Man Who Need Not Impress. {Personal note scrawled in manuscript margin: “Attn.: Archambeau”}

These are among the most distinguished of all academics, driven by monomania to attend to no matters but their research. Hence the filthy, unevenly buttoned Oxford shirts, frayed at the collar and encrusted with what we can only hope is nothing more offensive than well-aged youghurt. Hence the transcendence beyond mismatched socks to the sublime and rarified realm of mismatched shoes. Common in Chicago’s Hyde Park, near M.I.T., and in the common room of Princeton’s Institute for Advanced Study. Much awkwardness ensues at the formal Nobel receptions to which these figures, with some regularity, repair.

Clad in work-shirts with embroidered name tags bearing words like “Bud” or “Mickey,” these are the professors you find hanging out on the foam-stuffed Swedish furniture in college radio station lounges. Do not call them by the names on their clothing, as these are never their actual names. Do not attempt to identify the band named on the tiny pin worn on the straps of their shoulder bags: you neither know of the band, nor can you pronounce its name, since it features an umlaut with an extra dot.

Diesel jeans? Nope, that was ten years ago. But the skinny jeans and bowling shoes worn by the high hipster prof did cost more than your car. So did the tight-fitting sweater and the oddly shaped glasses, which are the same odd shape as those worn by all architects, graphic designers, advertising copy writers, entertainment lawyers, entertainment accountants, entertainment actuaries, and entertainment podiatrists.

Chinos. Golf shirt. All that’s missing is a nametag, really.


These poor lost souls wear suits, or suit pants and a tucked-in Oxford shirt. The depths of their silent desperation are unfathomable, unless they are economists, in which case the depth of silent desperation exists in direct proportion to the gulf between their salaries and those of Wall Street bankers.

He probably teaches Irish literature, or possibly pre-twentieth century art history. He updates his Facebook profile picture with alarming frequency, but all pictures show his sneer of cold command. Cast a cold eye on him, horseman, and pass by.

4.B. Starring in His Mental Movie as “Professor”

Tweed jacket. Knit tie. Possible beard, possible Camelot-era Kennedy haircut. He walks abstractedly across the quadrangle, watching a movie that plays in the drive-in theater of his cranium. The movie is called “I am, at last, a professor.” The plot is like that of Pinnochio, who yearned to be a real boy. This is the only species of professor other than the Insurance Salesman to carry a briefcase rather than a shoulder bag (or the discarded plastic shopping bag of the Park Bench Sleeper).

His bald head is bronzed. His white beard is grizzled. His camp shirt is open at the neck, and his burly legs extend from beneath his khaki shorts like elegant oaken shafts. He could get away with a goddam ascot if he wanted to, because he is The World’s Most Interesting Man. You are not him.

Failed example of subcategory 5.A., above.

No one but she has so thoroughly mastered the art of the turtleneck beneath the plaid jumper. No one but she knows where such jumpers can be purchased. No one has more ergonomic footwear.

Rarely seen outside of the microhabitat of South Bend, Indiana.

If you’ve seen those pictures of real estate agents on benches at bus stops, you know the type: grinning impossibly white grins from beneath impossibly blonde hair, wearing suits in bright red or canary yellow, these are among the few female professorial types to co-ordinate the color of their pumps with the color of their outfits. Many are former high school principals now teaching education. In fact, they may all be former high school principals now teaching education.

Picture the a professor from the sub-category 7.A. above. Now picture several young children, and a husband whose sole contribution to raising said children consists of turning the channel to cartoons during dinner. Picture an unrevised dissertation awaiting revision, and a tenure clock ticking in the background, somewhere near the rapidly emptying vodka bottle. Now picture what has happened to her hair and outfit.

Common in theater departments and in programs devoted to the teaching of freshman writing. Hard-working and incredibly popular with students, these figures are somehow invisible to high-level administrators and those in charge of tenure and promotion.

8.B. The Jogging and Yoga Set

As they enter their sixties, they pass you with ease on the jogging trail, their gray hair somehow immobile in the wind. The wisdom of their selection of spandex is disputed, unless the professor in question is Martha Nussbaum. They will all outlive you. Yeah, you. You with the meatball sandwich and the Anchor Steam Ale.

I believe you know the type. Much that is black. Sometimes a pencil skirt. And those glasses. Those glasses…

…those glasses that, if bent too far up in cat’s eye fashion, can go so tragically wrong.

At this point Raskolnikov’s notes seem to say something apologetic about stereotyping, but I have smeared the pages with donut crumbs and coffee, and his remarks are illegible. Perhaps, with a sufficient grant, I could begin a research program to decipher them.