Perloff, Eagleton, and the Contradictions of the Avant-Garde, with a Totally Unrelated Response to Mark Scroggins 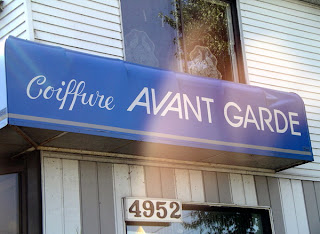 Fret not, gentle reader: I'm not here to lay some heavy, heady theory on you. Instead of wrenching hefty notions down from the Olympian heights of 21st Century Modernism or The Ideology of the Aesthetic, I've been thinking about lesser works by Marjorie Perloff and Terry Eagleton. "Lesser" might not even be the word. My texts du jour are among the least hefty and durable of works: specifically, I've been thinking about the 200 word or so pieces Perloff and Eagleton contributed (along with a few dozen other notable writers) to the new "Books of the Year" issue of the TLS. These pieces are pretty much what you'd think they'd be — contributors are asked for quick descriptions of a couple of books from 2007 they think worth noting. There's not much elbow-room for analysis or contextualization, but even so, the nature of what each writer chooses, and the quick comments they lay down on the broad, oyster-gray pages of Britain's most venerable book-rag can be telling. And here's what the picks of Eagleton and Perloff tell me: those of us into formally adventurous literature are still trying to square the same old circle. Like our modernist grandparents down on the old avant-farmstead, we still long for both form-turning-in-upon form in limitless innovation, and, at the same time, for a broad public reach, even a political presence. 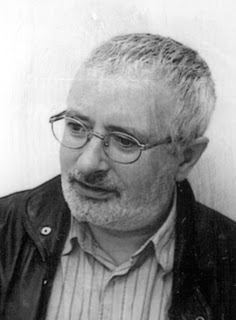 Eagleton picks two books, one an semi-experimental novel by Joseph O'Conner called Redemption Falls. "Stuffed with ads, documents, news reports and narratives-within-narratives," writes Eagleton, "this sprawling carnival of a historical novel has a proper indifference to the demands of organic form, and is all the richer for it." I haven't read the book, but it sounds for all the word like a kind of Dos Passos trip, a broad historical narrative cut through with all of the mediating uh, media through which we experience history. Eagleton's other pick is Paul Mason's Live Working or Die Fighting: How the Working Class Went Global, an analysis of working class struggle through the industrial and post-industrial era. For me, Eagleton's two choices represent in miniature the dual loyalties held by so many of the people I know, loyalty to formal innovation on the one hand, and to leftist political ideals on the other. Trying to put those two loyalties together can be exhausting. Here, Eagleton simply lays them side by side, the twin badges of his (and your, and my) disposition.

Perloff's picks are Daniil Kharms' Today I did Nothing — a selection of poetry and prose by the unpublished-in-his-lifetime Russian absurdist written while cooped up in a psych ward in Leningrad — and Susan Howe's latest collection of poems, Souls of the Labadie Tract. What's really interesting to me here, though, aren't the picks per se but the hope Perloff attaches to them. The books, says Perloff, give her "hope for an avant-garde writing that speaks to a larger audience." Most of us have had moments of yearning for bigger sales and bigger reading audiences for the books we write/care about. But there's a strange contradiction in wishing for such things for avant-garde writing. I mean, writing that constantly challenges the normative methods or reading, and the logic of the literary marketplace, and even the media of writing and the dissemination of writing, is often thrilling stuff. But you can hardly ask for it to succeed on the terms of those markets and media it eschews. I don't mean to say that the experimental writing club should put up a velvet rope and station someone to act as a bouncer to keep the undesirables out (chris cheek seems like the right sort of guy — I can imagine him tossing Billy Collins out into a snowbank). I just don't know if it's possible, barring some strange alignment in the heavens, to be both pop and avant at the same time. If you know how, good luck to you! I hope you'll invite me to the after-parties in Hollywood: I've always wanted to hang with Snoop Dogg in his Hummer limousine. 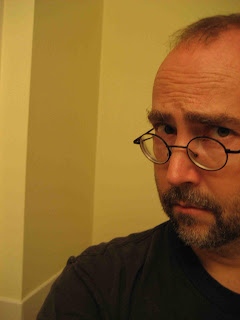 My man Mark Scroggins has tagged me to write up seven previously unknown facts about myself. I find it a bit disconcerting. I mean, while I do a lot of blustery me-oriented stuff on this blog, I'm pretty choosy about which sides of myself I put out in public, and I imagine that most of what I want known is out there somewhere, online or in obscure journals or in the occasional book. But okay. Here goes (anyone with anything better to do is hereby excused from class, and those of you without something better to do have my pity: you're obviously sitting out a slow and oppressive day at the office. Or maybe you're in grad school, which amounts to the same thing).

1. Mark begins with a musical revelation, about seeing Alban Berg's opera Wozzeck in Florence, so I'll start with an image of myself as a junior in high school, armed with fake ID and down in the all-but-unbelievably skanky punk club in Winnipeg called (check this out for the whiff of the Commonweath) The Royal Albert Arms. Bob Mould and his band Husker Dü are up on stage, Bob's got a 12-string guitar and wants to play acoustic. The punked-out fans are spitting and yelling and throwing beer around and demanding a harder sound and Bob shouts back "fuck you, I wrote those songs on this guitar!" I liked that, I think because it showed me A) that alterno-conformity could be as stifling as the turned-up collar on a 1980s preppy polo shirt and B) that you didn't have to let that bother you.

2. Mark goes medical in his next revelation, commenting on his crappy dental work, so I'll mention the freakish lack of toenails on my big toes. Yep.
No, this wasn't some Archambeau-as-Elephant-Man weirdness at birth. The nails were perpetually becoming ingrown, and I finally went to the guy who keeps the feet of the Chicago Bears in working order. He pulled the nails out with what seemed to me like a pair of medieval torture implements and told me I had a remarkable tolerance for pain. Not true! I just have a remarkable ability to hold a scream in until I can release it in private. Later, he performed surgery to remove whatever it is that causes nails to grow in the first place. Pumped full of space-age pain relievers I overrode the objections of the medical professionals and checked myself out of Northwestern University Hospital, and hoofed it home to my apartment in what looked like giant, hospital-logo-havin' clown shoes, feeling no pain. Until the wonder-drugs wore off. Oy. 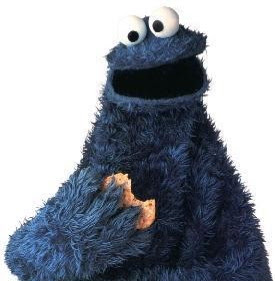 3 & 4 (Special double issue!). For his third and fourth revelation, Mark tells us about his obsessive habits with books. So I'll mention my own book habits. Firstly, until grad school, I treated books as if they were all rare and fragile manuscripts from the bowels of the Bodleian, even, at one point, doing up a card catalog of my precious archives. Secondly: during grad school I worked in Chicago's old Aspidistra Bookshop, where used books were piled in great post-apocalyptic heaps. I remember them as smoking heaps, but that can't be right. Anyway, I unlearned all of my careful habits, and now when I read a book I practically consume it, bending the cover backwards, writing copious notes, dog-earing it at will, and otherwise behaving like the Cookie Monster, only, you know, with books.

5. Mark next confesses to singing poems in ballad meter to himself to the tune of Joan Baez's "Mary Hamilton." I'd like to say I always sing Ezra Pound's "The Seafarer" as if I were Geddy Lee of Rush, or perhaps System of a Down's Serj Tankian, but it just ain't true. I do, however, mentally sing the words of Emily Dickinson's poems to the tune of both "The Yellow Rose of Texas" and the theme to Gilligan's Island. But I think everyone does that.

6. Mark goes next to religion, confessing that, while a black-hearted atheist, he does own nine Bibles. When people ask me about religion, though, I get deeply reticent and vaguely pretentious, quoting Wittgenstein's quip "whereof one cannot speak, thereof one must be silent." I then tend to look for a polite way to leave the room.

7. Mark ends by saying he wishes he'd had the perserverence to stick with music as a career. I'll admit that, when my degenerate friends signed up for the percussion section in ninth grade band, I took a different route. Much to their initial mirth at my apparent emasculation, I took up the flute. I theorized that sitting in a section of girls would prove convenient for meeting, and therefore potentially hooking up with, said girls. Music, sadly, didn't really enter into it. 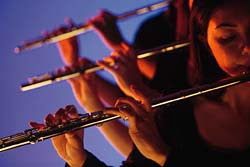 Those of you who sat through all that are entitled to the same kind of lollipop you get on the way out of the dentist's office. Send a self-addressed, stamped envelope and I'll try to get round to sending one your way.

Posted by Archambeau at 12:00 PM No comments: