What, you ask, are the &NOW Awards, and what has this new anthology got to do with them? Excellent questions! I'm glad you asked!

The awards were the brain-child of members of the board of the &NOW Festival of Innovative Writing, soon to kick-off its fouth iteration, this time at the University at Buffalo. Essentially, they were conceived as a kind of anti-Pushcart Prize, meant to recognize poetry, prose, and cross-genre writing from outside the mainstream. The first of a planned series of biannual anthologies (edited by Steve Tomasula, Davis Schneiderman, and the present humble blogger) will be launched at this year's festival, but I know you can't wait that long. Don't fret! You can pre-order it now from Amazon.com. It makes a great gift! And the cover of this first one is particularly appropriate for the coming Halloween season.

Posted by Archambeau at 1:45 PM No comments: 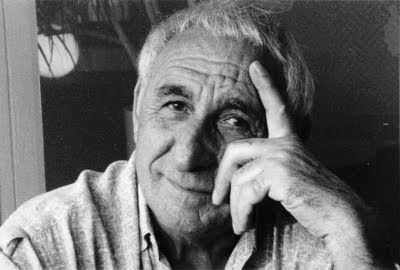 Very sad news: Raymond Federman died this morning, after a long battle with cancer. I first met him when he came to the Lake Forest Literary Festival as our keynote speaker in 2007, and I can't overstate the man's energy, verve, and joie de vivre: at twice my age he wore me out, rushing around campus, putting on performance pieces, boiling and sawing books with my colleague Davis Schneiderman, supervising dramatic productions, and being the grand raconteur.

Federman's friendship with Samuel Beckett was truly formative, making Federman into the kind of writer, and the kind of man, he became. It's not surprising, then, that as Federman neared the end of his life, he turned to Beckett once again. Here's a poem about reading Beckett Federman wrote about five months ago, when he saw all too clearly how close he was to death:

A Matter of Enthusiasm

I am rereading Malone Dies
just to mock death a little
and boost my cancerous spirit.

I shall soon be quite dead at last
Malone tells us at the beginning
of his story.

What a superb opening
what a fabulous sentence.

With such a sentence
Malone announces his death
and at the same time delays it.

In fact all of Malone’s story
is but an adjournment.

Malone even manages
to defer his death
until the end of eternity.

That
soon is such a vague word.

How much time is soon?
How does one measure soon?

Unlike Malone prone in bed
scribbling the story of his death
with his little pencil stub
normal standing people
like to be precise
concerning their death.

Oh how they would love
to know in advance
the exact date and time
of their death.

How relieved they would be
to know exactly when
they would depart from
the great cunt of existence
in Malone’s own words
to plunge into the great lie
of the afterlife.

How happy they would be
if when they emerge into life
the good doctor
or the one responsible
for having expelled them
into existence
would tell them you will die at 15:30
on December 22, 1989.

Could Sam have written
I shall soon be quite dead at last
had he known in advance
when he would change tense?

I shall die tepid
without enthusiasm.

Does that mean on the contrary
of those idiots on this bitch of an earth
who explode themselves with fervor
to reach the illusion of paradise
while taking with them other mortals
that Malone’s lack of enthusiasm
towards his own death is a clever way
of delaying the act of dying?

A lack of enthusiasm for something
is always a way of postponing
the terms of that something.

The soon of Malone mocks
the permanence of death
and his lack of enthusiasm
ridicules the expression at last.

And so before he reaches the end
of the first page of his story
Malone has already succeeded
in postponing his death to
Saint John the Baptist’s Day
and even the Fourteenth of July.
Malone even believes he might be able
to resist until the
Transfiguration
not to speak of the Assumption
which certainly throws some doubt
as to what really happened
on that mythical day
or what will happen to Malone
if he manages to hang on until then.

In fact Malone defies his own death
by giving himself
birth into death
as he explains at the end of his story.

All is ready. Except me. I am being
given, if I may venture the expression,
birth to into death, such is my impression.
The feet are clear already,
of the great cunt of existence.
Favorable presentation I trust.
My head will be the last to die.
Haul in your hands. I can’t.
The render rents, My story ended
I’ll be living yet. Promising lag.
That is the end of me. I shall say I no more.

Nothing more to add this evening.
Malone said it all for me.
I can go to sleep calmly now.
Good night everybody.

Do something strange and playful today. That's how Federman would have wanted to be remembered.