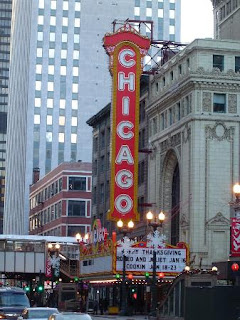 So there I was, leafing through some of my old notes on Carl Sandburg, Theodore Dreiser, and Nelson Algren, pulling together a plan for the next installment of the seminar I'm teaching on the literature of Chicago, when an email from Kent Johnson dropped out of the sky, announcing his post on what he's calling The New Chicago School of poetry. Dragging myself out of the past is never easy: it's like answering the call of the alarm clock and pulling myself out of dreamy reverie and into a world where things are actually happening, and I'm called on to play my own part. But Kent's post is worth shaking yourself awake: he spells out, more convincingly than anyone I've seen yet, just what it is that's been happening (and something has definitely been happening) in the literary life of our city.

A couple of years ago Kevin Killian's quipped that, when young poets ask him where to go, he says "Chicago is the most exciting scene around. Years from now we'll be looking back at the early 21st century and wishing we'd all relocated there at this time in poetry history," and I think he was on to something, although just what it was that was happening remained a bit obscure. Around the same time, Bill Allegrezza and Ray Bianchi released their anthology The City Visible: Chicago Poetry for the New Millennium , putting forth a range of poets and groping toward a sense of what is most vital in the city's poetry at this point. Two younger poets, Adam Fieled and Steve Halle, also made attempts at defining the city's new poetic scene. Fieled ventured the term "Chicago Eliotics" for a group of formal-yet-experimental types including Allegrezza, Bianchi, Eric Elshtain, Simone Muench, Larry Sawyer, Jordan Stempleman and myself. Halle edited (and still edits) Seven Corners a blog-journal devoted to showcasing the work he finds most exciting from Chicago and environs. Attempts at definition came from the realm of Respectable Authority, with the University of Chicago launching an annual symposium on Chicago poetry, and Harvard's Steve Burt giving a special tip of the hat to Chicago-based poets in his Boston Review article "The New Thing," which put neo-objectivism at the heart of what is new and vital in American poetry.

Noble attempts! But Kent has, I think, come closer to getting at just what has been most characteristic (and, to me, most fascinating) about the poetic vortex that's been gathering around Chicago for the past few years. Here's how Johnson begins his piece, called "The New Chicago School::

My proposal: That the closest thing we presently have to a “School” of younger, rigorously innovative poets in the U.S. (one that stands closest chance of being retrospectively seen as akin in significance to the NY School in its first-​generation, proto-​formation years ... is what I’ll call the New Chicago School. It’s a list of accomplished, experimental writers, more poetically focused as a collective, per­haps, than the contents list of the City Visible anthology of a couple years back, and more geographically focused, too, inasmuch as all the poets have roots in the city...

He then names names, including (out at the edge of things, in an uncertain netherworld between poet, critic, and scholar) that of the current humble blogger:

He lists other groups (especially of younger poets) before asking "From a poetic standpoint, what would justify the set?" After making the obligatory gesture toward the limits of any broad definition, he offers the following idea of what connects this group:

....it’s held together by a vibrant, active scene and certain broad affinities of poetic predisposition and — quite often, and with the necessary exceptions — affect. The tilt is towards a “scholarly,” brainy, less “pop-cultural” and more self-​consciously “critical” mode than tends to be the case around St. Mark’s, for example. And, I’d argue, the work by and large tends to be more thematically ambitious, more novel and challeng ing in its registers and forms, more earnestly in tune with the international than the work of the younger NY scene, still largely caught, the latter, within tonal frames of the hip, the pop, the vernacular, the anecdotal, the flarf.

Kent's on to something here: his thesis is certainly true to my own, previously inarticulate, sense of what makes Chicago poetry more than just poetry written in the greater metropolitan area. Kent's article is up online, courtesy of Bobby Baird at Digital Emunction. It's got big shoulders.

In other news, John Matthias (along with Michael Anania an intellectual and artistic godfather to untold numbers of Chicago poets) seems to be ramping up for a full-scale prose memoir, with autobiographically-based pieces appearing in the recent issues of Harvard Review, Parnassus, and Chicago Review. Be the first on your block to collect the set!

Posted by Archambeau at 11:52 AM No comments: