We Got a Yeats, You Got a Wallace Stevens 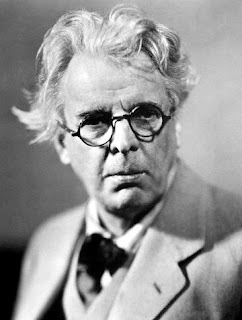 "We got a Yeats, you got a Wallace Stevens." That's what Eavan Boland told me, more than a decade ago, when I interviewed her for the Notre Dame Review. Boland had recently started teaching at Stanford, and we were talking about some of the differences between American poetry and the poetry of her native Ireland. The point she was making had to do with the public status of poetry in the two countries: in Ireland, poets have had a much more public role than poets in America, and this is reflected in the nature of the poetry itself: Ireland ended up with W.B. Yeats as a major figure, while the United States ended up with Wallace Stevens. While Yeats was capable of intense obscurity (in both his early, symboliste-inflected work and his later period of personal mythology), a substantial portion of what he wrote was deliberately public, even news-editorial-ish. Poems like "Easter 1916" or "September 1913" took on public events, and offered opinions about them in langauge that was both beautiful and accessible. A surprising number of Yeats' mid-period poems actually appeared in newspapers. Stevens, of course, is a different animal. In a country in which poetry has had very little public role, Stevens was a very private poet. Hell, most of the guys at the insurance office where he worked didn't even know he was a poet. And while I'm sure one can tease references to public events out of damn near anything with the application of sufficient quantities of Dr. Adorno's Magic Ointment, it's tougher to make a case for the author of "Thirteen Ways of Looking at a Blackbird" as a political poet than it is to do the same for the author of "An Irish Airman Foresees His Death."

There's much truth to what Boland said. But the reason it comes to mind today is that I'm doing the final read-through of a review I just wrote of some books of recent scholarship on Irish poetry, and I'm sensitive not only of the truth of what Boland said, but of the falsehood. That is: while she's right about the visible Irish tradition, the scholarship I've been reviewing has made me acutely aware of how much Irish poetry lies outside this tradition. The discourse that has developed around Irish poetry over the last two centuries has been a nationalist one: it expects, even demands, that the poet speak on national themes to a national audience. There are good historical reasons for this: in a colonized society, there's very little in public life in which one can place one's trust. All the institutions are dominated by the colonizer. But poetry, at least, remains relatively free, and can become a medium for nationalist consciousness to form in opposition to the colonizer. All well and good, but like so many things, such a discourse can be as oppressive as it is enabling. The demand for a nationalist poetry means the poet is meant to write about some themes, not others, and to do so in a language that is accessible to a broad audience — hence the anti-Modernist style of much Irish Revival poetry. So in Ireland, a publicly-lauded tradition of the nationalist poet came into being. They had a Yeats, while we had a Stevens (we've had aspirants to national poet status, but Walt Whitman, who yearned to be a national figure, never became one until many decades after his death). But along with this visible tradition, there's been a long tradition of Irish poetry that falls outside of the nationalist paradigm. The Irish may have had their Yeatses, but they've had their Stevenses, too. They just didn't fit the paradigm for what an Irish poet was meant to be, and therefore didn't get much attention.

Who are these guys? Well, in the mid-twentieth century, there are people like Brian Coffey and Dennis Devlin. And in the current generation, there are people like Billy Mills, Randolph Healy, and Catherine Walsh. They haven't had their due, living in the shadow of the nationalist tradition. But in an Ireland long since emerged from colonialism, and now a kind of prosperous province of the European Union, nationalism is fading as a paradigm for poetry. Seamus Heaney may well be the last figure to be consumed by it. And the Irish Stevenses may yet have their day.

Posted by Archambeau at 2:31 PM No comments: