The Politics of Stupidity, or: The Prescience of Pierre Bourdieu

In the last years of his life, Pierre Bourdieu turned with increasing urgency to political questions.  Seeing in globalization an ever-greater concentration of all forms of capital—financial, educational, symbolic, and so forth—he called for a true internationalism, a set of reforms at the European and, ultimately, global level to rein in the forces that would reduce everything to a commodity, and render up all commodities into the hands of the few. Speaking to an audience of students in Berlin in June of 2000, he said a few words about the nature of the emerging global elite that resonate particularly well with today’s grim political picture. Those words go a long way toward explaining the nature of the kind of resentful populism—and in some cases, fascism—that we see rising around us.

He speaks of the unequal distribution of cultural capital, including the kinds of capital (advanced educational degrees, international travel, familiarity with the keywords of prestige fields like economics or the sciences, readership of intellectually challenging books and media, etc.) amassed by the elites of the emerging global economy. To be clear: this is an elite broadly conceived—not merely the 1% we railed against at Occupy, but the professional and managerial classes.  I, and most of those reading likely to be reading this, are members of that class, whether we care to admit it or not.


The ruling class no doubt owes its extraordinary arrogance to the fact that, being endowed with very high cultural capital (most obviously of academic origin, but also nonacademic), it feels perfectly justified in existing as it currently exists… The educational diploma is not merely a mark of academic distinction: it is perceived as a warrant of natural intelligence, of giftedness.  Thus the “new economy” has all the characteristics to appear as the “brave new world.”  It is global and those who dominate it are often international, polyglot, and polycultural (by opposition to the locals, the “national” or “parochial”). It is immaterial or “weightless”: it produces and circulates weightless objects such as information and cultural products.  As a consequence, it can appear as an economy of intelligence, reserved for “intelligent” people (which earns it the sympathy of “hip” journalists and executives).  Sociodicy [the means by which a society justifies itself] here takes the form of a racism of intelligence: today’s poor are not poor, as they were thought to be in the nineteenth century, because they are improvident, spendthrift, intemperate, etc.—by opposition to the “deserving poor”—but because they are dumb, intellectually incapable, idiotic. In short, in academic terms “they got their just deserts”…

There’s a kind of smugness, Bourdieu says, to the widely-held belief among elites that we got here because we’re smart, and others ended up where they are because they’re stupid—a smugness based on an almost willful blindness to the barriers to the development of human capital faced by the majority of the population, and a on a discrediting of forms of knowledge other than those held in esteem by elites.  But so what? Well, there’s this, when Bourdieu continues:


The victims of such a powerful mode of domination… are very deeply damaged in their self-image. And it is no doubt through this mediation that a relationship—most often unnoticed or misunderstood—can be traced between neoliberal politics [the deregulated, financialized, and internationalized world of globalization] and certain fascistoid forms of revolt among those who, feeling excluded from access to intelligence and modernity, are driven to take refuge in the national and nationalism.

Tell people they're stupid—even if it's not spoken except through a thousand micro-aggressions—and they won't forget it.  “America first,” they'll say, or “France for the French,” or "Build the wall!" or “Brexit!” They'll simmer with resentment, feeling that they are looked down on by a worldly elite as nothing more than idiots, or a basket of deplorables.  And here they are, angry to the point of violence, giving us (as Michael Moore put it) "the biggest fuck you in human history." They've been had, of course—preyed on and manipulated by the cynical people who have taken power and seek only their own personal ends. We are right to oppose them, but we would be wrong to say we did not, to some degree, provoke their rage.

Posted by Archambeau at 1:22 PM No comments:

Poussin's paintings, Shakespeare's epitaph, Thom Gunn's existentialism, and many other things animate the elegantly written essays in Alfred Corn's new collection of prose, Arks & Covenants. As fascinating as the essays are, though, my favorite part of the book is its collection of aphorisms. There have been times and places when collections of maxims and bon mots have been expected from writers—but our time and place is not one of them.  This makes me love them all the more. Here's what I said about Corn's aphorisms in an essay called "Without Trumpets" that serves as an afterword to the book:


Corn’s own eccentricities include his commitment to the aphorism as a literary form. The aphorism, of course, has an ancient and distinguished tradition: for centuries, any French writer without a book of maxims would have to make excuses for the omission. But, as Corn points out in the introduction to the collection of his own aphorisms included here, the form has passed from fashion, and has difficulty finding a publisher and an audience. Corn’s aphorisms certainly deserve an audience for their exemplary mondanité. For the present context, though, it is interesting to note how many of his aphorisms turn upon observations on the same themes around which his criticism revolves. When, for example, Corn writes this observation about dogs, we are back in the realm of cultural influence and transformation: “Dogs outside their masters’ houses at night inspire each other to ‘speak.’ One bark sets off another, and so on until all within earshot wake up and join in. The same with literary folk.” Similarly, when Corn writes ““Insofar as the author’s task is to find speech capable of communicating what can’t be said, writing resembles the Incarnation, in which ineffable deity becomes visible flesh and audible word” we are returning to his obsession with Christian forms of the sacred. And how can we read “Humility is not the same thing as humiliation, but if you’ve never been humiliated you probably won’t attain it” without feeling Corn’s compassion for the social outsider?


Posted by Archambeau at 6:26 PM No comments:

Laureate Poets and Heretic Poets in the TLS

I've always romanticized the Grand Old Literary Newsprint Journals—the New York Review of Books, the London Review of Books and, best of all, the Times Literary Supplement. It's not often I've encountered references to my own work when flipping through the TLS (three times, not that I'm counting), so I was delighted to run across Stephen Burt's "Laureates and Heretics" in the May 3 issue—an article that takes its name from a book of mine that came out several years ago.

Burt's essay isn't about my book: it's a review of two books of essays by contemporary poets, Alan Shapiro's The Self-Forgetful Perfectly Useless Concentration and John Matthias' At Large.  But—noting that both Shapiro and Matthias studied in the considerable shadow Yvor Winters cast at Stanford (Matthias under the man himself, Shapiro under his disciples)—Burt chose to use Laureates and Heretics as a means of understanding the two poets.  My book, after all, was about Winters' last generation of students, and the poetic careers they went on to have.  Burt gives a good, quick sense of the book in his introductory paragraph:


In 2010 the Illinois-based poet and critic Robert Archambeau published Laureates and Heretics, about “six careers in American poetry”: those of Yvor Winters (1900–68) and five of Winters’s last graduate students at Stanford University. Of those, Robert Pinsky and Robert Hass became US Poet Laureates, while John Peck, John Matthias and James McMichael (the heretics) found small, loyal, contrarian audiences for their drier and more obviously learned poetry. Archambeau showed that Winters’s astringent yet charismatic pedagogy, his early modernist experiments and the severe doctrines of his later years – against raw emotion and modernist uncertainty, in favour of reason, control and inherited rules – could generate sharply divergent poetic programmes. He also showed how a particular way of reading, indebted to Winters’s poetic tastes and touchstones (including Ben Jonson, J. V. Cunningham and George Herbert’s “Church Monuments”), could persist for generations, even as its acolytes diverged.


Burt goes on to use the notion of "laureate" and "heretic" poetics to describe Shapiro and Matthias, respectively:


Shapiro’s fourth volume of prose. Most of its nine essays recommend, persuasively and movingly, what Archambeau might call a laureate programme: personal but guarded, never opaque, fiercely committed to the double notion that poetry can be read by everyone, and that it requires hard work to write. Shapiro may never become US Poet Laureate, but his moderate, democratic, inviting prescriptions fit Archambeau’s laureate frame.... John Matthias remains one of Archambeau’s heretics, and he writes for readers who have already read a great deal, or in some cases for readers who have read every issue of Notre Dame Review, the literary journal that Matthias co-edited in the 1990s and 2000s.

The article is available in print, and online, here, to subscribers.
Posted by Archambeau at 2:44 PM No comments:

On Rhyme Out Now! 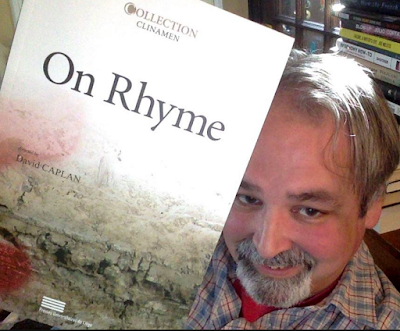 Rejoice! David Caplan has edited a collection of essays called On Rhyme, with contributions from a host of interesting people. Here's the table of contents:

Rhyme in Other Texts

Revolutions: A Collaboration — Or How to Write in the Age of Trump and Putin 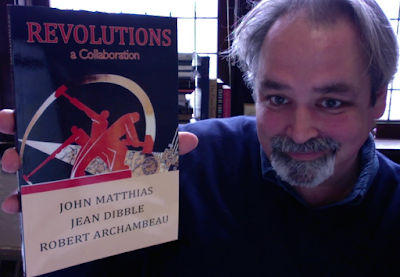 How to write in the time of Trump and Putin? In words and images, John Matthias, Jean Dibble, and Robert Archambeau give you an answer to consider: find the muse of amusement and the reality of facts and twin them: you will arrive at "Revolutions," which instructs us on the possible meanings and uses of poetry in an Age of Emergency. These collaborators sing of methods of representation and ways to make new. Visually stimulating, linguistically innovative, this is work of invention and innovation to help us survive. From eidolon to Eisenhower, from Eiffel to Eichmann, the leaps keep us on our toes. There is much consolation in the anxiety of forms.—Maxine Chernoff

That's the jacket copy got Revolutions: A Collaboration, a book I co-wrote with John Matthias, with images by Jean Dibble. It's just out from Dos Madres Press and looks great. But what's it about? There's no easy way to say, but I'd start with this: it takes scenes from the life and works of the great Russian poet Mandelstam, crosses them with events from the life of John Matthias, and bends everything toward a fictive realm, all the while commenting on the nature of cognition, memory, and the (possibly redemptive) imagination.  Here's an example of one of John's poems with my commentary (the "HIJ" is a fictive character based on the three consecutive letters of the alphabet H, I and J, and the poem uses words from the entry for those letters in the dictionary based on a kind of Oulipo-derived formula):

is the method of the new hussars;
the tsar’s unhappy; bless him

and applause aplenty bring to his tsarina.
All bells toll this inauspicious hour.

Peasant absentee shuns orthodoxy of
the Bishop of Pah. It reigns down from clouds

O hallelujah crowd and ever after: Winds blow
across the steppe, the messenger

caught up in mass and mission
fails in the individual soul: Everything’s for sale,

Poetics is no longer worth a pension
even for a splaygirl in from Budapest. Anapests –

the three red accents on her breasts.
Hazard me a guess, dauntless guest of hap-

Hapax Legoman was his love, who
drove a nine and twenty for her dower.