Aestheticism and the Language Question in Ireland 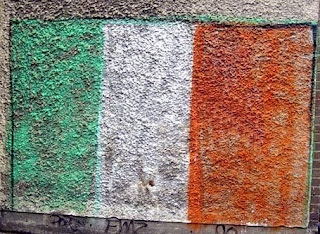 Back in the 1990s, that magical time when the air was still scented with Derrida's eau de cologne and the prose of academic journals soared ever higher into the spheres of the mandarin, I and some of my cronies took an interest in postcolonialism. Since the venue for this was Notre Dame, much of the thinking and talking and arguing about postcolonialism had to do with Irish literature. And one of the Big Debates revolved around an age-old issue in Irish studies: the language question. The question was, specifically, this: what language was right for Irish literature?

Many of the literary people kicking around Dublin in Yeats' day felt that Ireland should throw off the shackles of the English language imposed by the colonizer, and take up the Irish language. The fact that there was no such thing as a single, official Irish language, but rather a cluster of different dialects no one of which was dominant, was often swept aside. As was the question of who, on the overwhelmingly English-speaking island, would write or read the new literature. Yeats hedged: he was too deeply invested in English to get out, and decided that Irish content in English-language poetry would do the trick (this was during his early, Celtic folklore phase). Others went the Irish language route. Still others, like J.M. Synge, decided to catch the true sounds and rhythms of Irish English — although Synge didn't think his own, urbane speech was the real thing. He trekked off to Wicklow and listened to the servants through a hole in the floorboards to get the true sound of things for his play Riders to the Sea, or so the story goes.

So we jawboned, we grad students, in the coffee shop, between bites of the excellent Irish soda bread stockpiled at Notre Dame to generate ethnic sentimentality among students who would, someday, be potential donors. How were we to feel about the language question? Had Yeats taken a wrong turn? Was the revival of the Irish language practical? Was it a tool of decolonization? Did the movement to revive the old language imply an ethnic essentialism that was ultimately untenable? The latter position was the popular one. We'd all read Brian Friel's play Translations, which made the point. And we stood in awe of Seamus Deane, then the king of Irish studies at Notre Dame, whose Field Day Anthology of Irish Literature set out to show that Irish literature was a palimpsest of different languages — Irish, Latin, Norman French, English — written haphazardly over one another. If there was a graduate student position on the language question, I suppose it was something like "we're all in favor of cultural decolonization and the preservation and prestige of the Irish language, but we're too hip and postmodern to believe the Irish language represents the truth about the nation, which is of course hybrid, like all good things ought to be, according to those sages upon whose partially-understood words we hang." And so we munched our soda bread and nodded sagely as the cheers echoed faintly from a football arena that still hosted a winning team.

As it turns out, we'd missed a whole other angle on the question. Like most American academics who talk about Irish lit, we'd followed too closely the canon-making apparatus of Irish nationalism. I've blogged before about how the idea of literary nationalism came to dominate the canon of Irish writers, lifting those who foregrounded cultural nationalism and decolonization to high status and relegating others (including most of Ireland's more modernist and experimental poets) to obscurity. And despite some good research on the issue, most of us still haven't found a way to expand our horizons. It was while I was working on a bit of my own horizon-expansion today that I came across an aspect of the lrish language question that I'd never seen before. 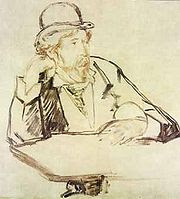 It was in the works of George Moore, who most definitely did not fit the bill as nationalist, anti-colonial writer, that I found this new angle. (New? well, new to me). Moore, who came from a Catholic landowning family in County Mayo, was a late Victorian figure (born 1852, died, I think, 1933), and is best remembered as a kind of hanger-on of the French Impressionist painters, and a fringe figure in the Aesthetic movement of London in the 1890s (he didn't spend much time in Ireland after his childhood). His Confessions of a Young Man, a memoir of his Parisian exploits, is probably the book of his most read, though I'd hardly call it canonical — especially not on the Irish Lit syllabus.

Moore bought into the whole program of aestheticism: art was to be for art's sake, and it was set against what aesthetes saw as the ugliness and irredeemable unpleasantness of the world of utility, industry, and bourgeois moralism. It seems unlikely that such a figure (an absentee landlord to boot!) would much care about the language question that so obsessed Ireland's literary nationalists. Like most aesthetes, he looked on ordinary politics and nationalism as beneath the true artist's concern. But he did have an opinion on the language question: he was strongly in favor of the revival of the Irish language. His reasons had nothing to do with nationalism, though, and everything to do with the aesthete's disdain for business, utility, and mere information. The Irish must revive their language, he argued in "Literature and the Irish Language," or be condemned to use a language irredeemably befouled by utility. "From universal use and journalism," he said (we must imagine the word "journalism" spat out in contempt), "the English language in fifty years will be as corrupt as the Latin of the eighth century." The Irish language, here, is a refuge from an English scarred and made ugly by its very usefulness. The Irish language, then, becomes not a part of the war against imperialism, but rather the war against English utilitarianism and industrialism — a war conducted, in this instance, not on behalf of the proletariat, but on behalf of beauty.

Of course in contrasting a utilitarian English against an unsullied Irish language, Moore works with a notion of Ireland as pre-modern, and even as mythical and irrational — an idea put about in the nineteenth century by Englishmen like Matthew Arnold to justify the imperial project — their argument being something like "we, the dull but rational Anglo-Saxons, are here to help, not exploit, you amusing, poetic, impractical Irish!". It's not the first time such notions of an anti-rational Ireland were turned around and used against things English. Much of the Celtic Revival was nothing but a taking of English imperial descriptions of the Irish and, rather than discarding them, re-valuing them — the Celticist argument being something like "we're irrational and mythic, sure, but that's why we're better than you!". Until this morning, though, I'd never seen such notions turned around to quite this angle before: the Irish language as a weapon of the aesthete in his war on modern utility.