John Steinbeck's Hamburgers and Other Culinary Offenses of American Literature 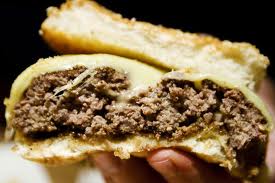 John Steinbeck was a whiz in front of a typewriter, but don't ever let him don the paper cap of a fry cook.  And keep Hemingway away from your camp stove, people.  Your whiskey too—but that's another story, and one we've heard told many times.

Consider this passage from The Grapes of Wrath, in which Steinbeck—with no condemnation and, indeed, with apparent admiration—describes the desecration of ground beef:

He presses down a hissing hamburger with his spatula. He lays the split buns on the plate to toast and heat. He gathers up stray onions from the plate and heaps them on the meat and presses them in with the spatula. He puts half the bun on top of the meat, paints the other half with melted butter, with thin pickle relish. Holding the bun on the meat, he slips the spatula under the thin pad of meat, flips it over, lays the buttered half on top, and drops the hamburger on a small plate. Quarter of a dill pickle, two black olives beside the sandwich… And he scrapes his griddle with the spatula and looks moodily at the stew kettle.

I'm all for grilled onions, warming a bun and, since the hamburger-eater has pretty much surrendered the cholesterol high-ground already, buttering things up in the manner of that finest of midwestern hamburger chains, Culver's (which also understands the virtues of the loose-packing 'smash technique' of patty making).  But no way, no where, no how, should anyone, ever, under any circumstances, press a hamburger flat with a spatula, as Steinbeck's hapless fry cook does not once but twice under the approving eye of the third person omniscient narrator, whose omniscience clearly does not extend into the area of burger frying.  One could point to any number of authoritative sources forbidding the practice, but I prefer to turn to a conversation thread on Chowhound, where the question was raised: just why do people insist on adding extra labor to the cooking process, only to dry their burgers out?  One "MartinDC" replied with what must certainly be the truth of the matter.  Why do these frycooks-manqué go nuts with the spatula?  "No reason," says our correspondent,

...other than the guy cooking them has seen other guys doing it. Also, there are cooks who like to play with the food while it's cooking -- like busy work (a corollary to this are people who stir the pot too much). It's hard for some people to just step back and watch the magic happen by itself.

There's the sad truth of it.  I imagine gender comes into play, and that there's some kind of male tool-handling impulse underway that only Freud could explain, but until my research grant comes in, I just don't have enough ground round stored away to put the theory to a statistically valid test.   We probably shouldn't be surprised that Steinbeck was deficient in his culinary skills.  He was, after all, the man who wrote of the beer milkshake, without including the word "abomination" anywhere in the description.  The matter comes up twice in Cannery Row.  In the first instance, one has hope for Steinbeck, because he evinces appropriate levels of shame and trepidation:

In Monterey before he even started, he felt hungry and stopped at Herman’s for a hamburger and beer. While he ate his sandwich and sipped his beer, a bit of conversation came back to him. Blaisedell, the poet, had said to him, “You love beer so much. I’ll bet some day you’ll go in and order a beer milk shake.” It was a simple piece of foolery but it had bothered Doc ever since. He wondered what a beer milk shake would taste like. The idea gagged him a bit but he couldn’t let it alone. It cropped up every time he had a glass of beer. Would it curdle like milk? Would you add sugar? It was like a shrimp ice cream. Once the thing got into your head you couldn’t forget it.  He finished his sandwich and paid Herman. He purposely didn’t look at the milk shake machines lined up so shiny against the back wall. If a man ordered a beer milk shake, he thought, he’d better do it in a town where he wasn’t known. But then, a man with a beard, ordering a beer milk shake in a town where he wasn’t known — they might call the police.

Later, though, the offense of consuming this teufelspissen, and the reaction—a kind of "meh"—is so out of proportion to the culinary effrontery that one has to discount Steinbeck's judgment of both food and drink completely:

Doc walked angrily to the counter of the stand.The waitress, a blond beauty with just the hint of a goiter, smiled at him. “What’ll it be?”“Beer milk shake,” said Doc.“What?”Well here it was and what the hell. Might just as well get it over with now as some time later.The blond asked, “Are you kidding?”Doc knew wearily that he couldn’t explain, couldn’t tell the truth. “I’ve got a bladder complaint,” he said. “Bipalychaetorsonechtomy the doctors call it. I’m supposed to drink a beer milk shake. Doctor’s orders.”The blonde smiled reassuringly. “Oh! I thought you were kidding,” she said archly. “You tell me how to make it. I didn’t know you was sick.”“Very sick,” said Doc, “and due to be sicker. Put in some milk, and add half a bottle of beer. Give me the other half in a glass — no sugar in the milk shake.” When she served it, he tasted it wryly. And it wasn’t so bad — it just tasted like stale beer and milk.“It sounds awful,” said the blonde.“It’s not so bad when you get used to it,” said Doc. “I’ve been drinking it for seventeen years.”

I mean, given the monumental lack of judgment here, we're lucky Steinbeck didn't advocate squishing those hamburgers with a shoe.

Fans of Steinbeck may take courage from the fact that he was not alone in his culinary ineptitude.  Consider an even greater writer, Ernest Hemingway.  While Hem was rightly considered something of a bon vivant, and could rhapsodize about the comestible delights of Italy and France, when he moves from being a diner to depicting the act of cookery itself, he stumbles from the sublime heights of Paris to the degraded depths of the canned food aisle.

Nick was hungry. He did not believe he had ever been hungrier He opened   and emptied a can at pork and beans and a can of spaghetti into the frying pan."I've got a right to eat this kind of stuff, if I'm willing to carry it,” Nick said.His voice sounded strange in the darkening woods. He did not speak again. He started a fire with some chunks of pine he got with the ax from a stump. Over the fire he stuck a wire grill, pushing the tour legs down into the ground with his boot. Nick put the frying pan and a can of spaghetti on the grill over the flames. He was hungrier. The beans and spaghetti warmed. Nick stirred them sad mixed them together. They began to bubble, making little bubbles that rose with difficulty to the surface- There was a good smell. Nick got out a bottle of tomato catchup and cut four slices of bread. The little bubbles were coming faster now. Nick sat down beside the fire and lifted the frying pan off. He poured about half the contents out into the tin plate. It spread slowly on the plate. Nick knew it was too hot. He poured on some tomato catchup. He knew the beans and spaghetti were still too hot. He looked at the fire, then at the tent, he was not going to spoil it all by burning his tongue. For years he had never enjoyed fried bananas because he had never been able to wait for them to cool. His tongue was very sensitive. He was very hungry. Across the river in the swamp, in the almost dark, he saw a mist rising. He looked at the tent once more. All right. He took a full spoonful from the plate."Chrise," Nick said, "Geezus Chrise," he said happily.

The writing here is really quite wonderful.  We get, of course, the characteristic rhythm of Hemingway’s sentences in their syntactically parallel style, and that great “Geezus Chrise” grin.  And we also get that zooming out into the eerie, almost sublime woods, large with a darkness that wraps itself around Nick’s echoing voice, and then the retreat to the little, cozy heimlich world of the campfire—a movement reflecting Nick’s own life-journey into war and, imperfectly, back home again.  But in inverse proportion to the glory of the writing is the food.  I mean, let’s be perfectly clear about this: the dish over which Nick Adams rhapsodizes, for which he invokes the name of God, is a can of spaghetti mixed with a can of pork and beans and poured over ketchup.  Had the narrative called upon us to pronounce heavy judgment upon Nick here, even to discard the sympathy for him that Hemingway has painfully cultivated in us, one could bear it.  As it stands, one is just a little bit shattered.  The only plausible beverage pairing for such a vexation to gastronomy is, of course, a beer milkshake.  But if I see you order one, I’m calling the police.

Posted by Archambeau at 6:04 PM No comments: