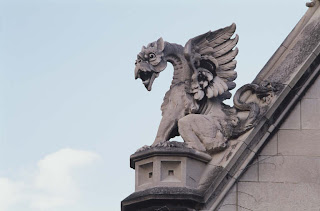 Ring the bells and sound the trumpets! Fire up the timpani and sackbutts in celebration: the University of Chicago has finally made a full-on commitment to the poetry of its own city! Yes, it's true. The U of C has, of course, supported poetry in many ways, and the Chicago Review has rarely been as strong as it is now, but the university has often seemed to function as a kind of Island of Laputa out of Gulliver's Travels, floating serenely through the air, wreathed in abstraction, and bound to no place in particular. The institution of a new annual symposium on Chicago Poetry, though, seems to indicate that things have changed, with the university catching a whiff of what's been cooking in the local scene. David Pavelich, who works with the Special Collections Research Center at the Regenstein Library, put together the first symposium, bringing Devin Johnston, Michael O'Leary, and Michael Anania to campus to celebrate the library's acquisition of the papers from Anania's Swallow Press years and the archives from Johnston and O'Leary's Flood Editions. The symposium, an afternoon-long series of discussions with a full house in attendance, provided a good occasion to look back on what lies behind the current flurry of poetic activity in our city — and a good occasion, it turned out, for debating the inclusiveness and exclusiveness of the city's evolving poetic scene.

Pavelich kicked things off by quoting Kevin Killian's comment about how, when young poets ask him where to go, he tells them "Chicago is the most exciting scene around. Years from now we'll be looking back at the early 21st century and wishing we'd all relocated there at this time in poetry history." Ruminating on whether the current scene is an unprecedented flowering, or the latest of a series of periodic renaissances, Pavelich seemed to take the latter position, mentioning the Modernist era of Sandburg and Vachel Lindsay; the Henry Rago-Karl Shapiro years, the era of Michael Anania, Ralph Mills, Sterling Plumpp, Lisel Mueller, Haki Madhubuti, and above all Gwendolyn Brooks; the Paul Hoover-Maxine Chernoff-Yellow Press scene, the Paul Carroll circle, the birth of Slam, and much else besides. He then quoted Basil Buntings' observations about Chicago poetry, including the interesting claim that poetry in Chicago had "an autonomous life," unlike the European-inflected literary scene in New York. "If it's an autonomous life," said Pavelich, "it's an autonomy with a history," and with this he introduced Devin Johnston and Michael O'Leary, who took the podium to talk about one of the more recent chapters in that history, the rise of Flood Editions.

Michael and Devin talked about the conditions necessary for Flood to thrive, reflecting on the immensely empowering lack of authority or hierarchy in Chicago's literary scene. But the more I listened to them, the more it seemed to me that the most enabling and empowering thing in the Flood story was the shared sense of friendship and adventure among the core group of poets — Devin, Michael, Michael's brother Peter, John Tipton, and others — affiliated with the press. When Michael talked about the road-trip over a flooded Mississippi River to visit Ronald Johnson in San Francisco, and when Devin talked about a later trip with Michael and Joel Felix to see the aging Johnson and put his papers in order, everything they said (and, most especially, the way they said it) indicated that this wasn't some dry editorial collective, these were the boys and the boys were having a fantastic time, racing around the country on pilgrimages to see forgotten poets, arguing about how to set up a press and make it break even over their plates of cabbage at Scruffy's Irish Diner, and looking to old issues of BLAST, old copies of City Lights books, and to the publications of the Jargon Society for inspiration. "When I read those City Lights books," said Michael at one point, "I had some vague sense that the poets all knew each other, and wrote for each other." When Michael ended with the exhortation to "find a friend and start a press," the thing that came through, more than anything else, was the romance of group endeavor, and specifically of young, male group endeavor, with all its wayward, road-trippy, cocky splendors (long may it wave). Which isn't to say Flood is all about the guys (Lisa Jarnot and Pam Rehm are important for Flood, for example), but the energy seemed very much of a piece with the Guy Debord Situationist crew, say, or with the pile-in-the-car-guys Beat vibe. Or that's the way it sounded at the symposium.

Perhaps it shouldn't have come as a surprise, then, that one of the first questions to follow Devin and Michael's talk came from a woman who seemed concerned about what she took to be the exclusivity of the vision of Chicago poetry being presented. She spoke a kind of grad-student-ese, but presented herself as an outsider, and expressed dissatisfaction with the "particular face" being put on Chicago poetry in the privileged context of a University of Chicago symposium. Though she didn't specify the nature of that particular face, I'm pretty sure she meant the white, male face: perhaps she'd taken her cue from Ron Silliman, who'd pointed out on his blog that none of the three speakers were women. It's not like she was wrong: almost all of the do-it-yourself, entrepreneurial, by-the-bootstraps anecdotage about Flood had been about a group of guys making something great happen on their own, out of the love of the group and the task (and make no mistake: Flood has been a great thing). And this first symposium did feature only white guys as speakers. When David Pavelich assured her that this first symposium wasn't to be the last word on Chicago poetry, she said she found the answer "unsatisfactory." I wish I'd had a chance to talk to her after Michael Anania's talk, though, since the picture he painted of Chicago poetry over the last few decades was one of the greatest possible diversity, in both aesthetic and social terms.

"The thing about poetry in Chicago," said Michael Anania, "is that it's never where you think it is." With this, he introduced an anecdote about how he, as a promising student poet, was sent up to Chicago from Omaha in 1960 to attend a gala fund-raiser hosted by Poetry magazine. Michael approached W.H. Auden at the black-tie affair, saying "I owe it to the guy I borrowed this suit from to introduce myself." "Poet?" asked Auden. "Yes," replied Michael. "Then why don't you steal some champagne and we'll sneak off," suggested the great man, and sneak off they did, to talk for hours at the Allerton Hotel while the Great Poetry Establishment (consisting then of John Ciardi, X.J. Kennedy, and the anthology editors Louis Untermeyer and Oscar Williams) droned on at the gala. Unknown to both the gala's attendees and escapees, a far more interesting group of relatively unknown poets was meeting downtown under the tutelage of John Logan, a Notre Dame prof who'd come in to teach informal poetry seminars — a group including Bill Knott, Paul Carroll, and Charles Simic, among others.

This sense of multiple scenes, and a city big and broad enough to embrace them, pervaded Michael's story of his years in Chicago. As I listened to Michael talk about A.K. Ramanujan, Ralph Mills, and Lisel Mueller; and about Jennifer Moyer's invention of the Poetry in the Schools Program that supported Angela Jackson; and about the Obasi Workshop that launched the careers of so many African-American poets (notably Carolyn Rogers and Haki Madhubuti); and about the founding of Tia Chucha Press; and about the night Robert Bly was pelted with eggs by Evanston-based Trotskyite Surrealists (who were then counter-attacked by the Stone Soup crowd), and about Gwendolyn Brooks' integration of the white and black reading scenes, I got a real sense of the complexity, diversity, and depth of the scene over the decades.

Maybe it was the rarefied air of Hyde Park, but I left with a head full of Hegelianism, thinking about how the symposium I'd just left was not only a continuation of the city's poetic tradition, but also a kind of rising to self-consciousness of a scene that too often has had too little of a sense of its own history.

Posted by Archambeau at 2:17 PM No comments: