Nietzsche Sounds Off on Barack Obama 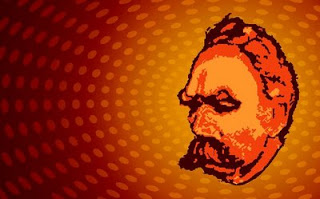 It might have been the three bottles of Tsingtao, it might have been the extra-spicy shrimp chow fun, it might have been all those hours eyeballing the cable coverage of the Democratic National Convention while surfing the blogosphere for amateur punditry. Odds are they all played into the dream that came to me a few days ago as I slouched over my laptop in a living room lit only by the blue glow of small-hours MSNBC. And an oddly highbrow dream it was: the figures who habitually make appearances in my dreams tend to range across a spectrum the low end of which is my junior-high science teacher, demanding the carbon count of a benzene ring, and the high end of which is Jane Fonda as Barbarella, demanding something altogether different. But this time the dream-presence was an intense little man whose enormous moustache bristled with general defiance. I knew him immediately from the cover of a dog-eared college paperback still on my shelf: Friedrich Nietzche.

“It’s like this,” he began, jabbing toward my chest with the stub of his cigar. “Your man Obama has a problem. Half of his supporters want him to be Apollo, the other half want him to be Dionysus. He has to be both, but he could end up being neither — and then,” he paused, eyes boring into me from beneath eyebrows fit for Bigfoot, “you know... kaput!”

Before I could even unslouch myself enough brush the crumbs from my shirtfront, Nietzsche was pacing the room, flinging cigar ash at the potted ficus and occasionally picking up the chow fun carton and sniffing suspiciously. “‘Enough with the big rallies and the speeches’ says the Clinton woman — but they can’t get enough! 200,000 people in Berlin! 84,000 in Denver! This is what they yearn for, after two demoralizing terms of a Republican White House: to feel the power of their unity in a crowd, to lose their small selves there, to be a part of a movement. This is what Dionysus is all about, and Obama’s the first Democrat to understand it in years. The bond of citizen and citizen is forged by the magic of the Dionysian rite — and those benighted anemics who look down on Dionysus have no idea how cadaverous they seem to the rest of us. They might as well be Mike Dukakis!”

Realizing that trying to interject would be like trying to get a word in edgewise with cocaine-era Robin Williams, I shut up and let Nietzsche roll on. “So what do they want, the rally-haters? ‘Substance! substance!’ — they shout it from behind the wheels of their hybrid cars. After eight years of the dimwit Bush’s administration, they want the piercing, analytic gaze of rational Apollo. They want reason, specific plans, policy that comes from expertise, not gut-feeling. And Obama gives it to them: he gives them page after page of...” (here Nietzsche wrinkled his brow, and grasped in the air with both hands after the right word) “... page after page of wonkery, I believe you say. But what comes of this? ‘Elitist! Egghead!’ scream his enemies. ‘Too Harvard,’ says one, ‘inept bowler!’ says another. They won’t admit it, but even his supporters worry about this. The teeming crowds at his rallies? They want a left-wing Reagan, not a new Adlai Stevenson.

“Now,” he continued, underlining each word with a poke in my chest from his burnt-out cigar, “what — is — to — be — done?” I started to mumble something about swing states and swift-boating, but the man snorted with contempt. “Details! Bah! For untermenschen! Think big! What is the greatest achievement of civilization?” My mind quickly raced: was it chow fun? blogs? No, not blogs. Maybe Barbarella... “Greek tragedy!” shouted Nietzsche. “And why? Why has this pinnacle of art stood above us for centuries in lofty grandeur? Ah! Because they knew, the Greeks, that the greatest, most enduring appeal comes from the fusion of Apollo and Dionysus! Thought alone is nothing. And mere spectacle without reason is worse. But together — ah, together...” He seemed to swoon for a moment, before snapping back to attention. “Well, if Obama can keep Apollo and Dionysus together, the election is his. The election? No, the nation! The age! From his mountain swift-stepping Zarathustra descends, and...”

“But what about McCain?” I asked, mustering my courage. “Doesn’t he have something to prove, too? I mean, he doesn’t really rate as an Apollonian candidate of reason, does he? Not if he can’t tell his sunnis from his shia. And he’s never been able to give the religious conservatives the Dionysian thrill they so deeply desire. When his handlers put him in front of one of those mega-church audiences you can actually see him recoil and, you know, die a little.”

“Oh, him,” Nietzsche replied. “He isn’t particularly good at being Apollo or Dionysus. Sure. But as long as the media keeps spinning this election as a referendum on Obama, he doesn’t have to be much of anything. The less we think about him, the more likely it is he’ll win.”

I had more to ask the agitated old philosopher, but with a start I found myself in the morning sun as it shone on the empty bottles and food cartons. I was awake, groggy, and blinking in the wake of what had started to seem like a nightmare.

Posted by Archambeau at 8:00 AM No comments: