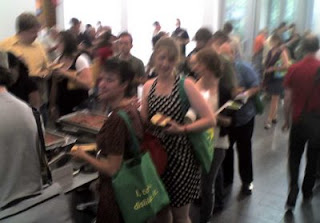 "It's picked over already! You'd better hurry!" These, gentle reader, were the words with which I was greeted by Patrick Durgin (my collaborator on the MLA Marathon Reading some months back) when I saw him at last night's Printers' Ball at Chicago's Museum of Contemporary Art. Durgin, who'd remained calm and collected while I underwent bout after bout of outfreakage during the various crises involved in organizing our 50-poet wingding last December, had a wild, hunted look in the eyes peering out from behind his Buddy Holly specs. I couldn't quite remember where I'd seen this look before — certainly not in Durgin's eyes. Then it occurred to me: this was a fire-sale-at-Filene's look, the look we all get when there's a seriously good deal to be had, and a crowd all around us intent on getting it before we do. This was a hurry — supplies are limited! look, and it was everywhere around me. Within minutes, I had it myself, as I rushed around the H-shaped network of galleries scooping up free books and journals like some kind of poetry-loving Pac Man. As Josh Corey said to me after it was all over and we were coming back to our senses over gin and tonics, "it's moments like this that you realize we aren't the captains of our own desires." 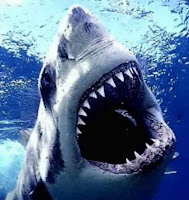 Indeed. It was a feeding frenzy. And it'll be some time before I've digested the pile of Chicago-area journals I scooped into my gaping maw — Court Green, Stop Smiling, TriQuarterly, Other Voices, Poetry, Warpland, Columbia Poetry Review, Hotel Amerika, and so many others. (I eschewed the tote bags from Poetry magazine, ironically inscribed with Marianne Moore's famous phrase about poetry — "I, too, dislike it" — and actually managed to overstuff my jumbo-sized Freitag courier bag for the first time).

I never made it out to the sculpture garden where the Gnoetry poetry machine was cranking out black smoke and elegant verse, but I did run into Don Share, Ed Roberson, Ray Bianchi, Traudi Haas, Jennifer Karmin, Tim Yu, Dalkey Archive's Martin Riker, Danielle Chapman (who'll soon be opening the new poetry lounge at the Chicago Cultural Center) and many others. Fred Sasaki, who was running the show, appeared preternaturally calm in the midst of the hipster literati crowding the bars, Chicago-dog tables, piles of books, DJ-tables, and theatrical performances — a still point in the turning world.

Last year the Printers' Ball was busted by the overzealous Chicago police. But this year's big show — held almost 40 years to the day after Chicago's finest delivered an authoritarian beat-down to the protestors at the 1968 Democratic Convention — went off without so much as a "could you please keep it down, the neighbors are complaining about the elliptical verse." 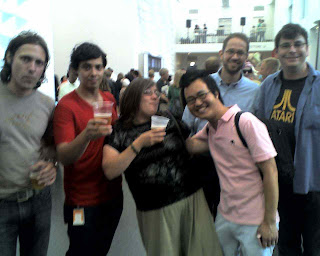 Posted by Archambeau at 11:21 AM No comments: