(From left: a member of Donaghy's band, Donaghy, Richard Pettengill and Bob Archambeau during Donaghy's visit to Lake Forest College, one of his last American poetry readings) 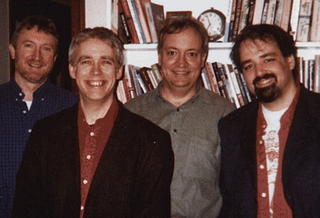 Some very sad news: the poet Michael Donaghy has died, apparently of a brain aneurism. A tremendously charming poet, Donaghy had come to Lake Forest College earlier this year as our artist-in-residence, and made quite an impression, as I'm sure he did everywhere he went.

Born in the Bronx, Donaghy had worked as a doorman in a swank Central Park West building and read poetry (often concealed in his hat) surreptitiously while on the job. He told me about a very elegant Manhattan matron who caught him in the act and gave him her tickets to the Poetry Center at the 92nd Street Y, a venue where he was eventually to give readings of his own. He was a great storyteller as well as a poet, and could turn just about any incident in his life into a narrative that had the whole room wide-eyed and fixated or roaring with laughter. He seemed, too, to have a habit of living interestingly -- I remember him telling me about spending a cold Chicago winter in an old Weather Underground safehouse in Hyde Park, hanging out with Keith Tuma and burning old, much-thumbed copies of Marcuse's One-Dimensional Man for warmth.

He was a performer in so many ways: as a musician, as a teller of jokes and stories, as a speaker of his own poetry (which he recited from memory). One suspects that the phrase "the show must go on" meant something to Donaghy. He was quite ill when he came to Lake Forest for his week's visit, with kidney stones that must have been quite painful. But on the day after his surgery he insisted on pulling himself together to give one of the most successful readings I've seen at the College. I imagine he loved performing more than anything else. He certainly did it well, and he found every opportunity to do it. I remember the way he rubbed his hands together theatrically when I told him the chairman had his check ready. Everything was act, charisma, and charm by the barrel. My English publisher called Donaghy "a fab bloke," which is about right, I think.

I don't think the little world of American poetry ever quite knew what to do with Donaghy. He ran, a little, with the New Formalist crowd, but since he chose to live in London he was on the periphery of that circle. His work was often elegantly formal, but it never had the feel of rigidity that one sometimes finds in the "Rebel Angels" school of formalism. He was tremendously well-read (I remember an impromptu talk about Eliot and David Jones he gave to a Modern Poetry class of mine) but he wore his learning as lightly as you could imagine, unlike those formalists who seem to think that their familiarity with the Norton Anthology of English Literature has made them into a kind of elite elect.

Donaghy called Conjure, his most recent collection(I find it hard to say "his last") his "father book." It is certainly that: his father is present in many of the poems, and vividly realized. But the poems rise above private anecdote: the experience of his father is often filtered through cultural artefacts from Shakespeare's Tempest to Welles' Citizen Kane. Donaghy's learning was worn lightly in part, I suppose, because his learning was -lived-: it was assimilated to his own life and experience. My favorite poets are often like this (it is the fusion of the immediate and the apparently remote that attracted me, for example, to the work of John Matthias). I regret that Donaghy's work only came to my attention recently, and I deeply regret how his career has been cut so tragically short.

Dances Learned Last Night, a slim Picador collection of Donaghy's earlier poetry, is a good place to start if you have yet to meet this poet. I feel very fortunate to have met the man.

Posted by Archambeau at 2:09 PM