The Crack in the Teacup Opens: The Debate About Prynne and Cambridge Poetry 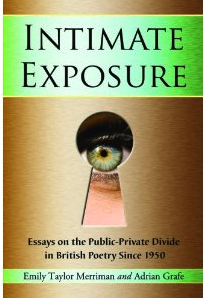 "The Crack in the Teacup Opens," a review of Intimate Exposure: Essays on the Public-Private Divide in British Poetry Since 1950 has just appeared in the venerable Oxford journal Essays in Criticism.  The reviewer, Yasmine Shamma, says some interesting things about recent discussion of J.H. Prynne, including this:


Archambeau's essay... [asks] 'What ought we to make of a school of poetry that has a strong public concern, but no appreciable public presence?' Robert Potts’s November 2010 article in the Times Literary Supplement addresses a similar question, outlining the ‘obscurity’ of the school, and asking how J. H. Prynne emerges as a ‘poet of our times’. Archambeau takes this obscurity apart, explaining in his ‘Public Faces in Private Places: Messianic Privacy in Cambridge Poetry’ that, as readers of the Cambridge school and, more specifically, Prynne, we ‘ought’ to consider how this school operates as a ‘poetry of public faces in private places’ (borrowing from Auden), and accordingly hold it up to some charges.

"Charges" is a stronger word than I would have used, but a lot of people who read the essay when it appeared in an earlier form would probably agree with Shamma's characterization.  Anyway, if you're interested in seeing the review (which, among other things, gives a good summary of my essay), it is available online, as well as in your local university library's periodical room.
Posted by Archambeau at 10:29 AM 17 comments: