I staggered free of the five-blog pile-on (see post below) and limped back up the stairs to my office. Closing the door and leaning against it panting and sweating, I thought I was safe at last. But no! Like a modern-day Inspector Clouseau returning from a world of danger to his Paris apartment only to be bushwhacked by his butler Cato, I found myself assailed even in my sanctum sanctorum. Yes indeed! A hand shot out from under my desk, hauled me down, and drubbed me soundly with an accusation (true, all too true!) of inadequate materialism.

As I dusted myself off and helped my assailant up from behind the desk, I saw that it was none other than Joshua Clover. He explained his position thusly: 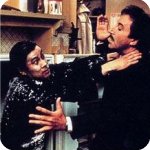 There's something frustrating about Samizdat's acccount, even as it seems smart and useful. The frustration lies in the way history is narrated, so that the cause for a bunch of powerful, potentially useful and destructive ideas turns out to be another idea. Locating the appearance of this separation of thought we're calling "disinterest" is useful. But history simply can't be told in such a way that thoughts always come from other thoughts; this approach is literally non-sensical (albeit occasionally convivial to folks who think for a living); effects without causes.

Good point! Indeed, deliberation about taste and disinterest in the eighteenth century come about, in no small measure, as a product of social change. It is a cornerstone, for example, of discourse in The Tatler and The Spectator, journals that play a role in the forming of a new, hybrid elite of landowners and the newly powerful mercantile class. The ideas come out of and feed back into a social movement.

You know, when I typed out more than 2,000 words on disinterest, I thought that A) no one would want to read it and B)no one would wish it longer. But given the level of interest, and the general desire for a subtler account than I was able to give in that space, I'm beginning to think there's a book in this. Which is good news, since I've spent about eight months laying the ground work for something along these lines.

Since everyone else who commented on the disinterest post had their photo posted, here's a shot of Joshua looking pretty badass for an English professor:

Posted by Archambeau at 6:52 PM