Why The Right Wing Can’t Do Comedy 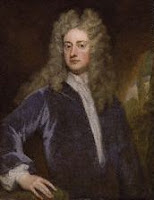 Darin Murphy has some interesting speculations up over at the Huffington Post about the failure of Fox News’ Half-Hour Comedy Hour, the show once trumpeted as the right wing’s answer to Jon Stewart and Stephen Colbert. Murphy sees the failure of the show largely in terms of the failure of the writers to grasp the nature of irony. There’s something to what Murphy has to say. But I think the waters run deep, here, and merit a little further investigation. 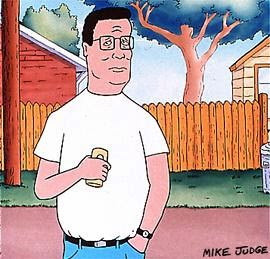 We could begin by asking why so few works of right wing comedy have been successful. The Half-Hour News Hour failed spectacularly. We can date the demise of Dennis Miller’s comedy career to the months after 9-11 when, understandably freaked out, he took a hard turn to the political right. Right wing attempts at comedy in the movies have done pretty poorly (remember P.C.U.? God, I wish I didn’t). Mike Judge’s King of the Hill can be pretty funny, and so can Penn & Teller in their show Bullshit, but I’m not sure you could call these conservative shows: they’re both kind of populist/libertarian hybrids. The right wing, which masters a lot of media formats in which even talented lefties tend to struggle (talk radio, say, or the personality-driven news commentary show) just can’t seem to do funny. And I don’t mean they can’t please irredeemably left-wing, egghead academic literary Green-party voters like, say, me. They can’t buy a win, even with a Fox News audience. What gives?

The answer can best be expressed in a syllogism, so dust off your notes to Logic 101 and check this: 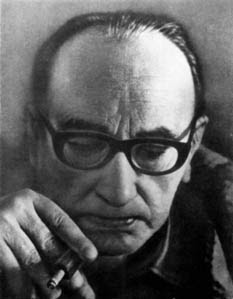 So, about that Major Premise — how do I know that comedy is inherently subversive of authority? Ladies and gentlemen of the jury, let me call as witness Mr. Mikhail Bakhtin, the foremost theorist of comedy in Stalinist Russia (which qualifies as a contender for World’s Toughest Gig, right up there with coal miner and “Guy In Charge of Weeding Norman Mailer’s Ear Hair”). Maybe it was the deeply authoritarian world of gray apparatchiks and political purges around him that got Bakhtin thinking about humor as the antithesis of authority. Be that as it may, Bakhtin’s thinking certainly didn’t endear him to the powers-that-were, who gave him a bit of a rough ride. I suppose I can see why the apparatchiks didn’t like Bakhtin: he insisted that everything delightful and funny was in some measure subversive of hierarchies and authorities, famously tracing the history of laughter back to medieval carnivals, where all the established hierarchies were suspended:

The suspension of all hierarchical precedence during carnival time was of particular significance. Rank was especially evident during official feasts; everyone was expected to appear in the full regalia of his calling... and to take the place corresponding to his position. It was a consecration of inequality. On the contrary, all were considered equal during carnival. Here, in the town square, a special form of free and familiar contact reigned among people who were usually divided by the barriers of caste, property, profession, and age.
—Rabelais and His World

Even something as low-grade and apparently apolitical as, say, the fart joke was in some measure transgressive for Bakhtin. Usually such jokes depend on a context where something we are meant to take seriously is dissed by being brought into association with despised and abject things like “the lower stratum of the body, the life of the belly and the reproductive organs” or “to acts of defecation and copulation.” I mean, think of it: involuntarily unleashing a truly noxious and garlic-scented belch on your own in the privacy of your own living room isn’t particularly funny, but doing it at a moment when you’re supposed to be a figure of authority (while, say, delivering your lecture on Hegel’s aesthetics to your seminar) will get you giggled at by your students. Or, uh, so I’m told.

So okay. Humor is subversive of authority. Any snickering kid who ever stuck an “Kick me” post-it on the back of an unsuspecting school teacher knows that. But what about the second part of our syllogism, the bit with the somewhat more contentious premise that the American right wing is into authoritarianism lately? Since I’m probably going to get some nasty email about this one, I figure I’ll call several witnesses: Theodor Adorno, John Dean, and Jack Block.

Hard-core Adornonauts know where I’m going with this, I’m sure: straight to The Authoritarian Personality, the 1950 book he co-wrote with a group of sociologists. Here, he defines the authoritarian personality as that type of deeply insecure subjectivity that yearns to submit to authority, that seeks stability and security above all else, that dislikes divergence and longs for conformity. Such a personality sees the world as crawling with threats, and sees salvation from these threats in powerful, unquestionable authority figures. People like this are susceptible to political manipulation, often (though not always) by the political right.

Adorno, of course, didn’t have anything to say about the American right after 9-11. But John Dean does. A guy with impeccable right-wing credentials himself (in addition to serving under Nixon, he describes himself as a “Goldwater conservative”), he argues in his 2006 book Conservatives Without Conscience that the conservative movement he has been loyal to all his life has taken a wrong turn, in exploiting insecurity and appealing to authoritarian sentiment (the need for certainty, the fear of the alien, etc.). In a time of great uncertainty, the party rode a wave of fear by appealing to and cultivating the kind of authoritarian personality Adorno described, building a Republican coalition based on such people. (Dean draws on the research of Robert Altemeyer, who updates Adorno’s work with new data).

Other new research points in the same direction. In fact, a recent article by Jack Block in the Journal of Research in Personality traced the political evolution of a group of 95 children over several decades, and came to the conclusion that the kids who grew up to be conservative had more authoritarian personality traits from the get-go. As Block put it in the Toronto Star, "the whiny kids tended to grow up conservative, and turned into rigid young adults who hewed closely to traditional gender roles and were uncomfortable with ambiguity” while "the confident kids turned out liberal and were still hanging loose, turning into bright, non-conforming adults with wide interests." The research seems to indicate, however preliminarily, a correlation between the right wing and a yearning for authority.

So okay. If we buy the Bakhtinian argument about comedy as subversive of authority, and if we find the sociological and psychological research on a correlation between the contemporary American right wing and authoritarianism convincing, then we’ve got an answer as to why the right can’t seem to do comedy: it runs contrary to their nature. Asking them to do comedy is like asking a bunch of sumo wrestlers to excel at basketball. Whatever their other virtues, they’re just not going to be good at it, at least not very often.

The authoritarian thesis also helps explain why the left does so poorly at talk radio and at O’Reilly Factor style television (listening to Al Franken on Air America was like watching a great sumo champion struggle to shoot a basket; watching Keith Olbermann on MSNBC is like watching a sumo wrestler somehow, amazingly, dunk and hang off the rim, which even more amazingly supports his bulk). Lefty-types don't work well in those formats, but the fit between those formats and authoritarian thinking is natural. I mean, if what you’re into is all that authoritarian stuff — submitting to a strong personality, being told that people unlike you are not only wrong but bad — you’re going to gravitate to talk radio and O'Reilly-esque TV. The authoritarian imagination teems with monsters (in the form of illegal immigrants, shadowy terrorists, and treacherous ivory-tower liberals). As Joseph Addison said centuries ago, such an imagination isn’t going to be good at playing for laughs. 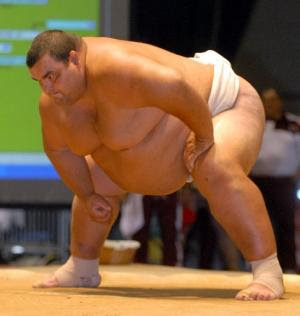 Posted by Archambeau at 3:49 PM No comments: