The Michael Jordans of Philosophy 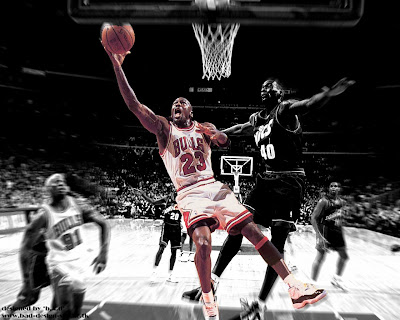 "John Stuart Mill," Karl Marx is said to have opined, "owes his prominence in English philosophy entirely to the flatness of the surrounding terrain." I've been reading Mill's essays on Coleridge and Bentham, and am inclined to think that Marx was being a little unfair. But only a little, and it's understandable: to someone who rose from the churning depths of nineteenth-century German thought, the little pool of English philosophy must certainly have seemed like a backwater.

I mean, German philosophers, from the late eighteenth to the mid-twentieth centuries, were the Michael Jordan-era Chicago Bulls of philosophy: dominant, confident, and effortlessly superior to the competition. I imagine a sense of this proud tradition informed Heidegger's infamous fulminations about how Frenchmen could only think seriously if they switched languages, true philosophy only being possible in Ancient Greek and in German (there is, said Heidegger in a 1966 interview with Der Spiegel, a "special inner relationship between the German language and the language and thinking of the Greeks. This has been confirmed to me again and again today by the French. When they begin to think they speak German. They insist that they could not get through with their own language." He says more about the alleged special philosophical nature of Greek and German in Introduction to Metaphysics, and in his Rector's address — sorry to belabor the bibliography, but a gentleman in a little newsgroup discussion of this post has alleged that this claim about Heidegger's views is "crap," and I wish to prove otherwise). Anyway, it's an odd, and kind of bigoted way of explaining the very real phenomenon of the comparative German excellence in philosophy. It's kind of like explaining the dominance of the Jordan-era Bulls as product of Chicago's superior hot dogs and deep dish pizza. But if we discard this kind of chauvinism, in which a rich tradition is explained with reference to some kind of bullshitty essential local superiority, how can we explain the tremendous power and depth of the German philosophical tradition? Why did the German-speaking parts of Europe give us Kant, Hegel, Schlegel, Schiller, Schelling, Schleirmacher, Schopenhauer, Herder, Fichte, Lessing, Feuerbach, Frege, Marx, Nietzsche, Husserl, Dilthey, Wittgenstein, Heidegger, Adorno, Jaspers, Popper, Benjamin, Arendt, Habermas, etc., while England gave us Bentham, Mill, Bertrand Russell, and, uh... Alfred North Whitehead? I mean, you have to go to the B-list pretty quickly when naming English philosophers. And it goes for the whole continent: while there are individual stars (Kierkegaard, say), no national tradition racks up the points like the Germans. Why?

I think I've got this.

I mean, when we consider the different historical origins and institutional contexts of the French, English, and German Enlightenments, the differences in the character of the different national philosophical traditions becomes clear.

The French Enlightenment was famously anti-clerical. "Écrasez l'infâme!" shouted Voltaire, and the infamy he wished to see crushed was that of the Catholic church. Voltaire's slogan is not, I think, unconnected with another remark of his, about how he found himself spending his time traveling from one chateau to another. That is: I don't think it's coincidental that Voltaire, who spoke against the church, was sponsored by aristocratic patrons (most notably the Marquis Florent-Claude du Chatelet). Sure, Voltaire had his run-ins with aristos (especially that odious knucklehead, the Chevalier de Rohan), but by and large it was they who buttered his toast, and one understands why: the French aristocratic and clerical powers were constantly at one another's throats. And this held true for the French Enlightenment in general: it was a culture sponsored by aristocrats, and it took place in their salons. It owed little or nothing to the church, and directed much of its energy into anti-clericism. (I'm sure the style of French philosophy, so prone to the cutting remark and startling observation, owes much to its origin in the witty salons — I mean, a guy like Roland Barthes is all glitter and quick-jab, whereas a guy like Habermas is all earnest thoroughness — this has got to be connected to the aristocratic salon origins of French philosophy and the earnest, bourgeois scholarly origins of the German tradition).

Then there's the Enlightenment in England. Which is really as Scottish as it is English, since so many of the big-league players hailed from Scotland (David Hume being the real marquee name). The Enlightenment here was notably less anti-clerical than the movement in France, and one understands why: church and state, like bourgeois and aristocrat, had found ways to get along in England, largely by not talking about the things they disagreed on (it's true! Addison's imaginary Spectator Club, for example, served as a model for how members of different kinds of elites could work together by leaving one another alone much of the time, and sticking to topics of common interest, or to what were seen as disinterested matters like taste. Don't get me started on this, or I'll cut-and-paste fifteen pages from the manuscript of the book I'm working on into this blog post and we'll never get to the Germans...). The English system had, and maybe still has, a tremendous capacity for getting along and letting-things-be. A big part of it seems to involve not talking about anything more interesting or controversial than terriers and the weather.

And then there's Germany, or, more accurately (since we're talking for the most part about the late eighteenth and the nineteenth centuries), the German-speaking lands. There were plenty of courts, but they were small compared to the French court, and historically the church had provided a high proportion of the administrative brain-power (and, along the way, accumulated much wealth, autonomy, and political power). The university system had developed in no small measure as a system for generating all this ecclesiastical administrative human capital, and it was here, rather than in the little courts, that the German Enlightenment's most important developments took place (eventually the university in Jena alone ended up contributing more to philosophy in the nineteenth century than, say, Spain) (please don't send me hate mail from Spain — I mean, I like Miguel de Unamuno, too, but that guy was totally channelling the Germans). So while philosophy in England during the period we're discussing often developed without too much of an orientation toward the church (positive or negative), and the French were generally anti-clerical, the Germans found themselves in an interesting position. They took up enlightenment philosophy in an overtly religious institutional context, and had a strong incentive to find some way of reconciling the old traditions of religious thought with the emerging forms of knowledge.

The challenge proved fruitful. For one thing, it led the Germans to develop historicism and hermeneutics and all the other things you need when you want to take a set of texts and understand them as true, but not literally true, or at any rate as having had a kind of truth in their time but not the kind of truth we have today. Hegel's Phenomenology of Spirit is probably the most obvious case in point. But it's not just that the Germans had a particularly difficult task, and built up their muscles to handle it: they had the university-bred culture of thoroughness and systematic thought behind them (and this makes all the difference: Hume is much, much more readable than Kant, but Kant's systematic method gives his work a power that Hume, every bit Kant's mental equal, can't match). Also, the Germans were able to draw on two traditions: secular Enlightenment thought and the long tradition of Judeo-Christian thinking. This is probably why a guy like Bertrand Russell is constantly dismissing the German philosophers as "mystics." I suppose many people will think Russell's got a point, but I always feel this lack of sympathy for half of what the Germans are up to is one of Russell's main limitations.

Anyway. If you want to get pseudo-Hegelian here, you could say that it was in Germany that the synthesis of Judeo-Christian traditions and Enlightenment secular thought came about. And this had everything to do with the institutional context in which the modern German philosophical tradition emerged.

As to how the Jordan-era Chicago Bulls came to be such a dominant force — well, that much simpler: Jordan was a basketball-optimized android, Scotty Pippin was a robot, and Dennis Rodman was clearly from another planet. 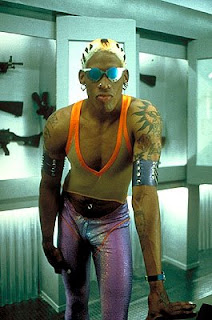