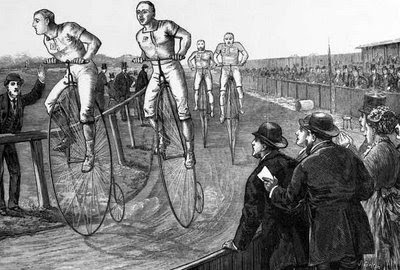 I've just fished the April issue of Poetry out of my mailbox, and am stoked to find Gabriel and Marcel Piqueray — Belgian twins, Surrealists, and poets of the mid-twentieth century — quoted on the back. Their lunatic oddball poem "A Pedal-Pusher Said to Me" appears inside, in a translation by me and Jean-Luc Garneau. Jean-Luc and I have translated a bunch of poems by les frères Piqueray over the years, and they've appeared here and there. But this is the most prominent appearance of a poem of theirs in English translation, and I'm glad they made the cover.

The Piqueray twins didn't like the idea of individual authorship (I think they took Roland Barthes' idea of the death of the author seriously — Barthes said it was surrealism that helped kill the author, after all, and the Piquerays published Barthes, along with Beckett and other luminaries, in their journal Phantomas). So they always published their work under their joint signature, and they delighted in creating weird personae for themselves. Here's a series of poems they published under the persona of "Guy Pezasse," along with their brief preface. The series originally appeared in Samizdat, and has a kind of deadpan whacko quality typical of the old Belgian surrealist scene, but not seen often enough elsewhere in poetry.

Guy Pezasse was a very great writer – and poet – of the 1960’s. He had the ability to observe with astonishing clarity his contemporaries’ actions and gestures, and to translate their daily existence into clear language.

Living in the constant company of two relatives and a friend, Guy Pezasse wrote about their daily occupations and worries with great success.

Guy Pezasse gives us the whole world, and nothing else: familiar scenes; remarkable, living situations.
The Sproks, which owes its title to Guy Pezasse’s love of those fish, was written when Guy Pezasse was in his 86th year.

Guy Pezasse was to die a mere ten years later, when his lungs unaccountably stopped working.

Tale of an Experiment

Whenever
He gets a chance
The man
Tears a head of lettuce
Into thousands pieces
And stuffs them into a very strong
Cup of filtered coffee.
And then
He takes
What remains of the lettuce
And dumps it
Into a vat,
Drenching it with coffee.


Example of an Activity

This man’s uncle
Sometimes carries
An immense mattress
On his head.
And he staggers
With this mattress
From the top of the stairs
To the coal bin,
Where he lays it down
And throws himself on it
Pumping his legs in the air
In excitement.


An Action Among Others

The same uncle
Who lives on the seventh floor
In the center of town
Is sometimes
In the habit of filling,
At dawn,
A large pan
With strong black coffee
And balancing it
On the window sill
With the help of his nephew;
Then sending it
Careening into the street,
Not giving a fuck
About anything.


Tale of Another Action

It is this same gentleman
Who, with the help of his uncle,
Fills an immense cast-iron
Stove
With gooseberry jam.
When they’ve done this,
The gentleman and his uncle
Throw handfuls of jelly
At each other’s faces
For fun.


An Activity Among Others

What also happens
Sometimes,
Is that the gentleman,
His uncle
And his nephew
Tear many heads of lettuce
into thousands of pieces
Then pour strong coffee
On them,
In a vacant lot
On a slope,
With
Coal heaps
And piles of shattered windowpanes
At the bottom of the slope.
Then
They speed down the slope
On their bicycles
Without braking,
Their legs spread wide,
Feet held away from the pedals;
And then,
At the bottom of this slope,
The tires make a crackling noise
In the coal
And a farting noise
In the shattered windowpanes.
Then the gentleman,
His uncle
And his nephew
Jump off
Their bikes
And pelt each other
With old heads of lettuce,
Very strong coffee,
Coal,
And shattered windowpanes
Until they grab some shovels
While leaping
On mattresses
Filled with plaster
And pumping
Their legs in the air
In the gooseberry jelly
Of their excitement.

The April Poetry looks to have a lot of good stuff in this special translation issue, including some poets for whom I feel particular affinities, such as Göran Sonnevi (a Swede from Lund, where I used to teach), and Jules Supervielle (on whose poems I riffed in my own Home and Variations).

Posted by Archambeau at 1:38 PM No comments: