Charmless and Interesting: What Conceptual Poetry Lacks and What It's Got 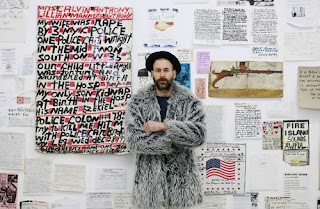 The brouhaha over conceptualism continues, with more and more people chiming in. There's a roundup of current opinions over at the Poetry Foundation, and the PF has been kind enough to allow me to lay down my own views.  Here are the first couple of paragraphs:

Fourteen months after reading at the White House, Kenneth Goldsmith found himself in the real center of American power: cable television.  His appearance on The Colbert Report, though, coincided not with a general celebration of the conceptual poetics with which he is associated, but with two stinging attacks on such poetics: one by the young poet Amy King in The Rumpus, and another by the esteemed poet-critic Calvin Bedient in Boston Review.  King’s criticism revolved around the idea of conceptualism as an in-group phenomenon, and on the hypocrisy of conceptual poets striking anti-establishment poses while simultaneously seeking, and beginning to find, such laurels as the established institutions of American poetry have to offer.  Bedient’s article criticized conceptualism for a lack of concern with emotion and affect, which he linked with both a truncating of poetry’s possibilities and a kind of reactionary political stance.  People’s responses to these criticisms, to judge by the emails, texts, phone calls, and Facebook messages I received, were passionate—half of my friends in the little world of poetry expressed delight that the horrible careerist bastards were finally getting called out for their sins, while the other half spluttered in outrage at those who dared try to quench the glorious yet fragile flames of poetic innovation.
This is a moment, then, for an assessment of the virtues and vices of conceptual poetry.  What does conceptual poetry lack, compared to other poetries, and what does it have to offer?  Any brief answer will, of course, be too general, but we can begin to sketch things out with reference to two aesthetic categories: the charming and the interesting.  Whatever else conceptualism has got going for it, it lacks—at least in its pure form—the former.  And whether one likes conceptualism or not, anyone who has engaged with it has found that it has, wonderfully or frustratingly, got plenty of the latter.

The rest is up at the Foundation's site.
http://www.poetryfoundation.org/harriet/2013/08/charming-and-interesting-what-conceptual-poetry-lacks-and-what-its-got/
Posted by Archambeau at 10:46 AM 4 comments: