Under the Pecan Trees and in the Academy

Back from Austin, covered in glory. Or maybe that's barbecue sauce. Be that as it may, I bring you the following observations about the AWP fringes, along with an added bonus in the form of a note on the University of Chicago's recent conference on poetry criticism.

1. There is no finer venue for a group poetry reading than the lawn behind the Bouldin Creek Coffeehouse on a warm spring evening.

You're guided in from the road by a fantastic neon sign featuring a reclining frog cradling a coffee cup and looking philosophically into the distance. You walk into the bar area, read the chalked-up specials, ponder for a moment whether to go with coffee or beer, then let your adoring fans put your drinks on their tab for the evening (thanks, Grant). The kid selling you your microbrew organic ale looks a lot like Rory Cochrane's character Slater in the Richard Linklater classic Dazed and Confused. 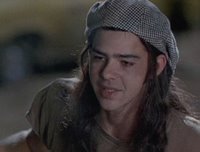 You hang for a while with the poets and local scenesters, then head through a hang-out room, a big screened porch, and down a gentle slope. You stand outside at a microphone flanked by two Peavy amps and a 70s-era lamp, all beneath spreading limbs of a giant pecan tree. You turn to face the big crowd and feel like this is where you belong.

2. The changing of the guard is always underway.

The last time I was in the same room with Kass Fleisher, her husband Joe Amato, Maxine Chernoff and her husband Paul Hoover was in 1999, at a bar called the Cirque Divers in Liege, Belgium. We'd all been speaking at a literary conference for which Rosmarie and Keith Waldrop had been the eminences gris. At the Austin reading, though, it was Paul and Maxine who were the presiding literary couple, the locus of

all gravitas. They sat together in the front row, Paul looking tall and distinguished in the American poet's black uniform, Maxine sitting sideways on her chair and emitting a sort of aura of kind benevolence. All the time I couldn't help thinking that, in an unspecified but no doubt shockingly brief-seeming span of years, I'll probably be at another such poet's hang (what's the progression after Belgian bar -- Austin coffeehouse? Nepalese used book store?), and see that Joe and Kass have become the iconic literary couple, presiding over the poets at play. Not a bad fate, really. 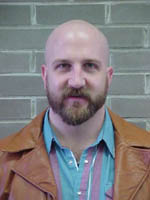 When I first saw Brett Ralph walk up to the mike in his trucker hat, biker boots, and general biker/redneck mien, I suspected he was going to be a mere garden variety prof-poet masquerading in a kind of western Kentucky drag as a way of distinguishing himself from the rest of us. But no! He's the real deal: former punk-zine editor, current poet and member of the band Rising Shotgun (which, mentioned as it is on my old pal Doug Shawhan's crackrabbit.com, must be good), and poet of the western Kentucky punk rock experience. "The Donkey," he said between poems, "always reminds me of punk. It's a docile, gentle, kindly creature, but when it opens its mouth it's just fuckin' awful..."

4. The Chicago poetry mafia is everywhere

Bill Allegreza, Ray Bianchi and Simone Muench were the venerable outfit's ambassadors to the reading.

I've admired Joanna Fuhrman's poems for a while, so I was glad to have a chance to talk to her after the reading, when she joined me and a few others over some of Bouldin Creek's finest tofu tacos. Fence came up, since they'd hosted a reading of their own across town. It turns out the Quinne cover still incites heated argument, in this case between an anti-Quinne faction (Joanna) and a pro-Quinne faction (me). Joanna didn't like that the image of Quinne wasn't in any meaningful way an attempt to ironize or deconstruct the kind of image of conventionally attractive women we see on so many glossy magazines. I maintained that the use of exactly this kind of undeconstructed image on a poetry 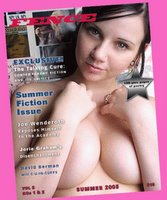 magazine was a kind of shaking up of norms, precisely because we'd expect poetry magazines to have covers that are either A) blandly arty or B) deconstructive. Somewhat hyperbolically, I claimed that the publication of that cover was a kind of minor-league version of Duchamp submitting a urinal to an art exhibit that claimed it was open to anything: it exposed the limits of our alleged tolerance. Joanna and I clashed even more when she claimed the things Rebecca Wolff wrote about the cover were even more

offensive than the cover itself. Joanna didn't like the idea of a poetry magazine as a commodity. I (as a guy who ran an independent magazine for a few years) maintained that magazines are all the things we want them to be (the public sphere, the area of aesthetic free play, etc.) and market commodities at the same time. (I shouldn't be surprised that this bothered Joanna: I once wrote a bit about how this idea was scandalous to our received opinions). All of this raises the question: what other poetry journal cover last year was interesting enough to cause an argument about aesthetics, the marketplace, gender and objectification?Anyway. Joanna handled my response to her attack on the paintings of John Currin as unironic objectifications of women ("that is such bullshit") with a whole lot more grace than it deserved. And I still like her poems.

6. AWP contagion, and the heroic defense against it

I think I'm going to invent a new award (call it The Schmoozie) for the most offensive example of literary networking and self-promotion at or near the AWP Convention. Like many people at the reading, I avoided the real convention this year, but the AWP ethos came after us, in the person of a certain fiction writer, whose full name will be disclosed only to those approaching me in person and buying the next round. This fellow spent the reading jumping up and down out of his chair to introduce himself to people. I first noticed him when a hand thrust itself between me and Joe Amato, and a voice barked "Joe? John -- loved your book." At the end of the evening he invited himself on-stage as a reader, compelling the MC to summon the dispersing crowd back to their chairs.

But my other new award, the Medal of Meritorious Merit in the Face of Overwhelming Clouds of Self-Congratulation (anyone got a better name?)

goes to Kass Fleisher, for her statement earlier in the day to the assembled heads of MFA programs. She told them she thought the AWP was too anti-intellectual, and withstood many minutes of heavy shelling afterwards. Represent, Kass!

ADDED BONUS: A BRIEF REPORT ON "HOW TO READ, WHAT TO DO: THE FUTURE OF POETRY CRITICISM" 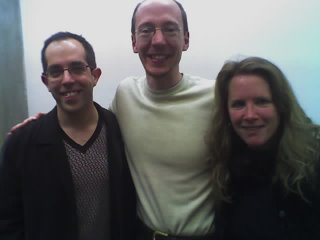 Before heading down to Austin, I trekked down to Hyde Park for a few hours of a small conference on the future of poetry criticism. After munching on the entirely convincing falafel (which seems to have replaced the cracker with awful cheese as the conference food of choice), I settled down for a panel featuring Jeff Dolven's “Communities of Style,” Oren Izenberg's “We Are Reading: Collective Intentions Toward Poetry,” and Maureen McLane's “Romanticism, or, Now: Learning to Read in Postmodern.” The format of the conference is a good one, worth emulating elsewhere: papers were made available ahead of time online, so the presenters didn't have to read from them. Rather, each speaker would rise in turn to summarize another speaker's paper and pose some questions about it. This made for lively discussion among panelists and audience members. (Izenberg seems to have honed the business of dealing with slightly nutty questions into an art. "I'm afraid I don't see the force of the question" is a phrase worth remembering).

Dolven's paper was of particular interest to me, in that it addressed the question of a poet's signature style. Dolven's interested in careful stylistic analysis, but he's more interested in the immediacy with which we are struck by a poet's style. When we read we experience a moment of recognition, not a slow accumulation of facts, and this is his object of study. McClane's paper (which I didn't get a chance to read beforehand) seemed to be a riotous thing, more dialogue or closet drama than essay. Izenberg, who's written about literary community before, riffed on John Searle's idea of intention in an examination of how reading is changed if we think of ourselves as reading in common with others (who may or may not actually exist as readers of commonly-read texts). This paper had particular resonance, as I sensed that these three were friends, and that they must have been reading together, one way or another, for some time. (McLane teaches at Harvard, where Izenberg used to teach, and Dolven, who alluded to how he used to hang out with McLane, used to teach nearby, at Brandeis). In a way I think this panel must be the gessellschaft ghost of an old gemeinschaft practice of reading in common.

I'd planned for my own upcoming talk at the University of Chicago to be a version of one of the chapters of Laureates and Heretics, in part as a shout-out to the editors of the Chicago Review, who were kind enough to publish part of the manuscript. But now I'm thinking of working up something else, a kind of response to McLane, Dolchen, and Izenberg. Theirs is too good a conversation to ignore.

Posted by Archambeau at 1:51 PM No comments: