Swimming in 1937: Notes on the Metapoetic

öran Printz-Påhlson, the late, grand, idiosyncratic Swedish scholar, critic and poet whose English language works it fell to me to gather for publication after his death.
I met Printz-Påhlson only a few times, at Lunds Universitet where I was teaching,  at his house in Malmö, and at a meeting of a conference of European poets in the late 90s—but I immediately felt we were on the same wavelength.  We loved many of the same things in music and literature, and our circles of friends overlapped in strange, complex ways.  But it wasn't just the man's personal qualities that I admired: I admired his work.  He was tremendously polymath and open to the virtues of almost any aesthetic or set of concepts: Michael Anania called him "a careening enthusiast."  He was also able to make poems about poetry that really were poems, not just illustrations of ideas.  Indeed, one of his major modes is metapoetry, and he can even write graceful poems not just about poetry, but about metapoetry itself: meta-meta poems, if you will.  One of my favorites in this style is called "Comedians," a mid-length piece dedicated to Kenneth Koch.  It's written in a single long stanza, but I see it as consisting of five different movements of variable length.
It begins like this: 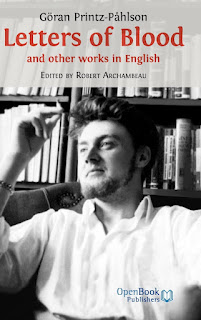