"What," you eagerly inquire, "was your favorite moment from the 20th Century Literature Conference in Louisville, Archambeau?" Ah! I'm so glad you asked. I take so many modest pleasures in my annual attendance at that much-storied gathering of the professoriate. The less-respecatable delights always include looking down upon my profession for its sartorial shortcomings, although I have to say the nature of that particular pleasure has changed over the past decade. Where once I could look forward to seeing the middle-aged men of letters comporting themselves in an unholy combination of pastel madras shirts and tweed blazers, that particular subspecies seems to have died out (or, more likely, retired emeritus). When I look around, now, I see a heavy preponderance of dark suits. It isn't that the conference was ever particularly rock-n-roll

to begin with, but these last few years have seen us all looking a bit more like a convention of actuaries or insurance brokers than I'd like. (Not that my corduroy-jacket, red chinos and Che t-shirt is the sort of thing a self-respecting human would wear in public. No, indeed. My look was recently described by the long-suffering Valerie (pictured here with rakish chapeau) as "artist-outpatient".

This year, though, I have to say that my favorite moment came right after I'd cadged a few drinks at the big Seelbach Hotel reception. Grant Jenkins had just regaled a small group with his "the time I crashed Emmanuel Levinas' apartment" anecdotes, when he and I decided to lead a small group away from the Official-Name-Tag-Wearing-Deluxe-Rubber-Chicken-Death-in-Life-Conference-Dinner down to the 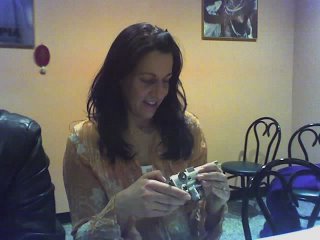 funky Afro-Caribbean restaurant and dance bar three blocks to the south. As we poured out of the hotel I saw that we'd gathered quite a crowd -- maybe 15 in total -- who trailed behind us like geese in flight. I felt like the pied piper, or at least the co-pied-piper. The real life of these events, I thought, as I talked merrily away with Jenkins, Mark Scroggins, Cate Ramsden, Piotr Gwiazda (with whom I'll be reading in Austin) and a crowd of grad students (mostly, I think, from IU-Bloomington), always seems to happen in the interstices of the official events.

But sentimentality aside, there was some good stuff at the conference itself. I started off at a panel with on "Forms of the Spiritual in American Poetry." Philip Beard kicked it off with a good paper on Robert Lowell. Instead of going back to the well-travelled territory of Lowell's early flirtation with Catholicism, Beard talked about Notebook as an exploration of negative theology -- the exploration of the nature of the divinity through a series of cancellations of what it is not. For the most part, the things Lowell chooses to cancel are the ideas of the divine that connect with the idea of the Big Bearded Father, and what he's left with is a more general sense of caritas. As with any discussion of Lowell that gets to the heart of things, the talk touched on the idea of Oedipal struggle. Lowell always seems to be caught in that matrix — he can't stand the idea of submission to powerful authority figures (which is why "a savage servility slides by on grease" is probably his most memorable line -- he just can't stand the sight of those smug conformists). But then again, he's always on the verge of sliding over from rebel to overbearing alpha male, an irony best caught, I think, in the image of Lowell in Buenos Aires, hopped up on one of his manic sprees, mounting the various equestrian statues of the city. Is this an ironic deflation of heroic figures? Is it a weird, misguided attempt to supplant or emulate them? Both, I suppose. I ran the idea by Beard after the panel, and he didn't object, so I'm hanging on to it for the time being. 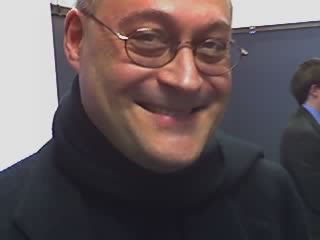 After Beard, Norman Finkelstein took the stage. He'd sent me a copy of his book of criticism, Lyrical Interference, which I'd read at O'Hare while waiting for my flight. I think I see why he wanted me to read the book: he covers a lot of my recent blog-topics, but in much greater depth and detail. He makes especially good points about the intersection of poesis and critical writing, a topic I'd just been writing about for Avant-Post. His paper was on the somewhat unlikely topic of Michael Palmer and spirituality. He managed to make the link between Palmer and spirituality via an interesting quote from the medieval German mystic Meister Eckhart, who held that poesis was always heresy, that literary form was inevitably a matter of scandal to orthodoxies. I'm not up on my Eckhart enough to know the exact context or import of his ideas, although it certainly made the inclusion of Palmer into a panel like this one possible. 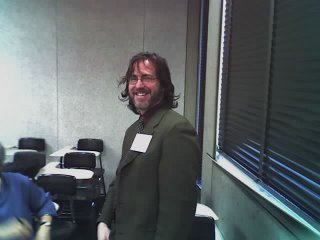 I was very glad to see a panel on Harryette Mullen, then a little befuddled when I noticed it wasn't just on Mullen, but on Mullen and Julia Alvarez. An odd combo, I thought, before remembering that the American academy still operates on somewhat crude categories of identity-politics ("two women of color! put them on the same panel!"). What the hell, I thought: what could the Oulipo-inspired work of Mullen really have to do with Alvarez's sonneteering? As I listened to the papers, though, I began to think that the connections were stronger than I'd realized. Mullen's Sleeping with the Dictionary and Alvarez's sonnets both take up form as a generative formal restriction as a means of getting beyond habitual perceptions. Oulipo is, in the end, a formalism. And long may it wave. (NOTE: although I've complained about the prevalence of suits at this year's conference, Grant Jenkins, who gave a very sharp paper on Mullen, upped the rock-n-roll quotient considerably with his new hairstyle).

My favorite panel, though, was one with only two papers: Mark Cantrell on Christian Bok's Eunoia and Mark Scroggins on the San Francisco poetry wars of '78. Cantell did a good job of contrasting the different kinds of reading required by the paper version of the book and by the rather fabulous electronic version. (As a guy with a lot of lamentable ebay purchases, though, I've got to say that I found entirely false Cantrell's assertion that the stakes of online experience are low because everything can be reset). 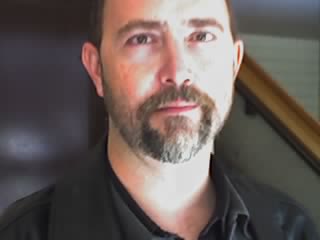 Scroggins covered the Barret Watten/Robert Duncan fracas with amazing detail, which I'd planned to recount, but I find that the job has been done for me.

I'd hoped to stick around to the end of the whole shindig, especially for Piotr Gwiazda's paper, but events arrayed themselves in such a way that I had to leg it back to Chicago early Sunday morning, without coffee, nudged in line by a pair of blue-haired women with aggressively mid-Atlantic accents and a strong desire to make it through the metal detectors before me.