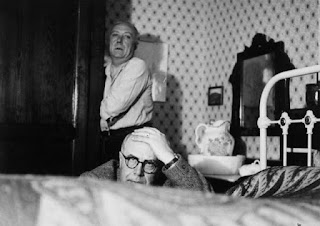 My unhealthy obsession with Belgian surrealism continues! In between hanging with my new daughter and writing an essay on the future of manifestos I've been translating the maxims of Louis Scutenaire (that's him in the foreground, with the poet Paul Colinet standing behind him). "Louis Who-tenaire?" you ask. Ah! Louis Scutenaire was an interesting guy. Lawyer turned surrealist, communist turned anarchist, friend of Magritte and namer of Magritte’s paintings, Scutenaire was active in the Belgian surrealist scene during its most vital years. His works include several volumes of “inscriptions,” or maxims, which give us a strong sense of his socially conscious but ever-skeptical ironist’s mind. Anyway, here are a few of my favorites:

It’s regrettable, for the education of the young, that memoirs of war are always written by people the war did not kill.

An angry cop: the usual, only more so.

Life will be good when work, for everyone, becomes a luxury.

To cry “Long live life!” is like shouting “Long live ice cream!” in a house that’s on fire. Shout all you want: you never know what may come of it.

I own up, absolutely, to the things that keep me a slave.

He who would enrage his neighbors charms their children.

Workers of the world: I have nothing to say to you.

There are a lot more. But they're like Valentine's Day chocolates: better when you don't wolf them all down at once.

Posted by Archambeau at 7:43 PM No comments: