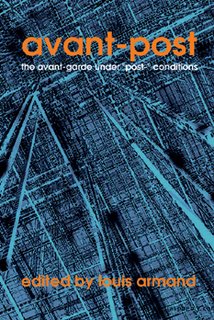 That's Avant-Post people, not to be confused with the post-avant. The latter is either a school of poetry or a hopelessly vague abstraction, depending on whom you task. The former is a new book edited by Louis Armand, featuring work by a host of notables. And my essay "The Death of the Critic," which is about Benjamin Friedlander, among others. And about the fate of lit crit in these our indifferent times.

Avant-Post engages the question of whether or not avant-garde practice remains viable under the prevailing conditions of a whole series of "post-" ideologies, from Post-Modernism and Post-Structuralism, to Post-Historicism, Post-Humanism and Post-Ideology itself.

Check it out! Also worth checking out: recent posts on Adorno's Aesthetic Theory by both Mark Scroggins and Dave Park. I'm meant to join this cross-blogging phenomenon, and am now the Official Laggard of the group.

Posted by Archambeau at 8:58 AM No comments: