Tom Pickard Among the Virgins 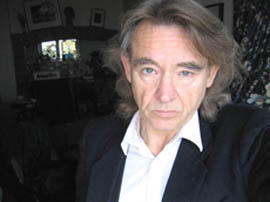 Devin Johnston of Flood Editions must be the most dedicated person in a field that, by its very nature, attracts wide-eyed idealists and hardcore Quixote types: poetry publishing. Not only has he set up a trans-continental North American tour for Tom Pickard as a promotion for Pickard's new books -- a tour ranging from Boston to San Diego and back -- he's also driven Tom and his crew around for a significant portion of the tour. Devin wasn't on hand for last night's Pickard reading at Lake Forest College, but it was clear from talking to Tom that Devin had laid the groundwork for a hell of a promotional tour. And of all that tour's dates, Tom told me, he'd enjoyed last night the most. This could just be good manners on Tom's part, but I'm inclined to believe him, in no small part because of the nature of the audience.

Pickard has been reading to a lot of the poetry-crowd regulars -- the Harvard guys, the Chicago Review crowd, the Buffalo Poetics mafia, etc. You know, the usual suspects. But at Lake Forest we don't have those people: since we teach undergraduates almost exclusively, our crowds tend to have a high proportion of reading-virgins who've never seen a poet live before, except perhaps in an open mike session at the local Barnes and Noble. Many of them don't know what to expect, but have some general notion that there will be high sentiments, sincerity and more than a few long stretches of boredom. You know, like church. And Tom Pickard, whatever else he may be, isn't church.

I think this un-churchiness was most clear to the seventy or so people in the audience (a very good crowd for a small school) when Tom broke out "Hidden Agenda," a poem he'd originally written for "The New Statesman," where it was to appear next to the writing of future Prime Minister Tony Blair. For reasons I can guess, its publication was delayed until a few issues later. The poem is a long and quite funny chant consisting, in large measure, of the word "fuck." Watching the crowd watch Pickard was a pleasure. A number of my own students kept smiling, then looking over at me nervously for some cue on how to act. I think they weren't sure about whether they could go ahead and be amused, or whether they should muster some pretence of being offended. Whether anyone was actually offended remains to be seen, but I don't think it is likely. It isn't as if the students don't get an earful of "fuck" in the dorms, at their parties, and in a lot of the music they download. Only the juxtaposition of the context (lecture hall, older man at podium) and the diction (low, vulgar) would lead to a their reaction.

Bakhtin would call such a juxtapositon "transcoding" -- the mix of the high and the low (often, in his examples from Rabelais, the holy mixed somehow with bodily functions). The function of such transcoding is a kind of delight in borderline scandal -- exactly the reaction I saw when one of my students came up to me after the reading and, smiling broadly, said "oh, my virgin ears!" I don't imagine the post-everything crowd at Buffalo would have quite the same reaction as the younger and less experienced audience we had last night, and that's the reason I'm inclined to believe what Tom told me about this stop on his tour being his favorite so far.

So take note, oh Devin Johnston, when next you plan a tour for Tom Pickard: he belongs among the virgins, delighted in the scandal of their own burning ears.

Posted by Archambeau at 7:31 AM