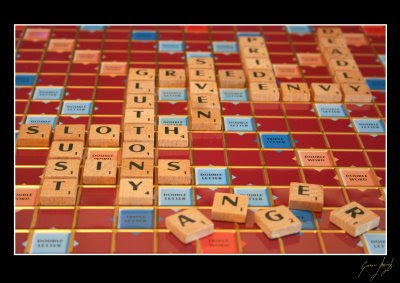 Jason Guriel defends the negative review in the latest issue of Poetry, and for readily apparent reasons. Right after the defense ("for the love of poetry, be skeptical," etc.) he lays down some stern judgments on Jane Mead, D.A. Powell, and John Poch. Toward the end of the bit on Powell he lists seven clichés of contemporary poetry, and I hereby make a modest proposal: all reviewers should print them out, make laminated cards, and hang said cards from lanyards around their necks. I mean, I'll do it if you will.

Here are the seven "fashionable gestures" that have become the clichés of the moment:

1. "reliance on buzzwords" (think: absence, abjection, the body, ellipsis, etc.)
2. "distrust of order" (as both theme and compositional principle)
3. "distrust of linearity and having a point" (call it Ashberying)
4. "anxiety over what words mean" (or, I'd add, the pose of anxiety)
5. "romantic bluster" (think Hart Crane on a bad day)
6. "imprecision" (I bet a comparison of contemporary poetic syntax and that of Swinburne would be instructive)
7. "sympathy for small critters" (I think this one's pretty self-explanatory)

"But," you object, "some of my favorite poets do this stuff!" Well, sure. Some of mine do, too. And, for the record, I admire the Ashbery poems that appeared in the same issue as Guriel's essay. But the point isn't that these are bad things, just that they've become a kind of decadent tradition in poetry, a set of gestures often made less because they have importance but because they are taken to signal "poeticness." My touchstone for this sort of decadence has been Andy Warhol's very early soup can pictures, which were spattered-and-dripped-over in the manner of Pollock. A gallery owner asked Andy why he did that, and the still-young artist said "I thought that's what you did to make it art." It's not that the abstract-expressionist drip is a bad thing (and I'd take a Pollock over a Warhol any time, if I found both in a yardsale and only had the pocket change for one). But by the time Warhol was starting out, the drip gesture had become fashionable, and was too-often taken up by those who didn't really have any deep need for it, or understanding of it. Warhol became Warhol by breaking away from all that.

I'm sure there's life in an aesthetic of imprecision and distrust of order. And some of my best friends write in rhizomes. But I'm even more sure that too many of the poems I've seen in the past decade fall into the techniques Guriel describes out of an uncritical acceptance of the aesthetic predicated on those techniques. Call it Jorie Graham's Disease.

Posted by Archambeau at 10:55 AM No comments: