Another Chicago Magazine Hides Out 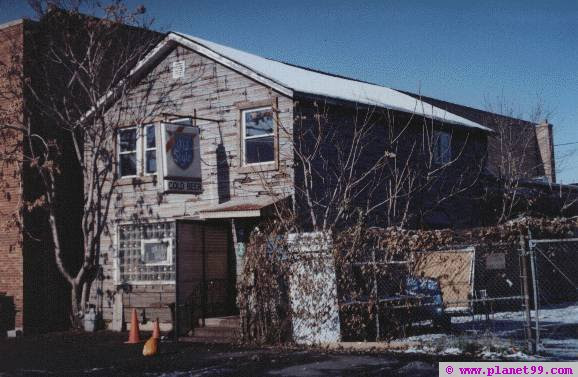 Last night Another Chicago Magazine held its launch party and reading for the new double-issue at Hideout. The aptly-named bar is hidden among warehouses in an unotherwise unpopulated sidetreet, and if you're not on the lookout you'll miss their little fenced sandlot and their much-battered Old Style Beer sign. The decor consists of old Christmas lights and the kind of wood paneling you see, for the most part, in super-8 movies shot in teenagers' basement rooms in the seventies. They've got Pabst Blue Ribbon in cans and Summit on tap. It is my new favorite bar on this earth.

Arriving with the lovely and talented Valerie from the leafy 'burbs of the north shore, I wasn't even sure if I was in the right place at first, but when Valerie suggested we park behind a group of hipsters disembarking from their car, I felt my hipness quotient go from zero to sixty in no time flat: said hipsters turned out to be Health & Beauty, a band the Valerie books for U. of Chicago gigs. Later I noticed that members of the Passerines had also turned up. So Another Chicago Magazine seems to rate with the Hyde Park bands. 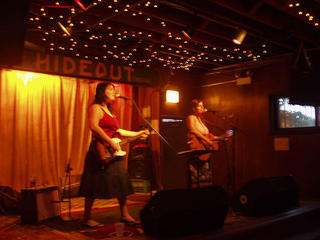 Royalchord, a two-woman band from Australia opened up. They were great, but had me a bit worried: Simone Muench told me I'd be reading first, and the band played very down-tempo, Cowboy Junkies alt-country style songs. Fortunately DJ Birdy Num Num raised the energy level before the readings started, and Jacob Knabb worked his mojo as manic MC. I read short (nobody ever complained that a poetry reading wasn't long enough), and was followed by Kristy Bowen, Matt "if I'm shaking its because I have ricketts" Guenette (in town from Madison), Jason Bredle and many others. Sadly, my ride got an urgent phone call and I had to bail before the end,

missing Kristy Odelius' reading, although I can say she was sparkling in both shirt and conversation beforehand. I was also glad to run into an old student (and new poet) Steve Halle, who turned me on to this article — sadly, he caught me as I had to rush, since my ride had already left the building. The article is both right enough and wrong enough to merit some thinking, by the way. So I'll add it to the to-be-blogged queue, along with my forthcoming Kevin Prufer post and (probably) a mulling-over of Mark Scroggins' new post on Adorno and style.

But I digress. I was impressed by the standing-room only crowd, liberally dishing out applause (I refer you to the cans of Pabst Blue Ribbon for an explanation — and to jello shots, one of which was forced down my throat by a sparkling poet). ACM seems to be flourishing, and, despite the absence of Mary Biddinger, who's too busy becoming an Ohio homeowner and tenure-track professor to make it into town, the event was a hit. It is encouraging to see this kind of enthusiastic, big, smart poetry crowd miles away from a university. And I think I'm setting up base-camp in Hideout for the rest of the summer.

By the way — those of you following the Contingent Poetry conversation might be interested in Ton Van't Hof's comments at 1hundred1. You'll have to be able to read Dutch, or go to the always-off-base Altavista Babelfish for a semi-useful translation.