Poetry and the Nation State 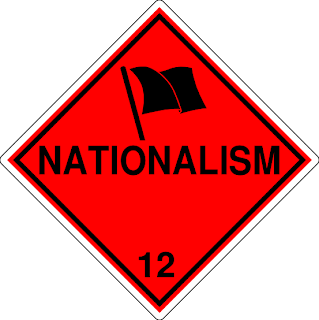 So here's the first thing I learned this weekend: when you want opposition from a group, there's no response more unnerving than a kind of bored acquiesence. Let me explain.

So I found myself, through a process too strange and hush-hush and picayune to dwell on, seated with a cluster of literati in a Chicago office tower overlooking Millenniun Park, evaluating a group of contemporary American poems. Like the others in the room, I'd been asked to bring in a few American poems I admired. Since I'm still Canadian enough at heart to resent the exclusion of poems from any kind of consideration based on their country of origin, I'd decided to mess with the system a bit and bring in poems by people from other countries. "Ha-ha!" I'd said over my waffles that morning, before heading off to the meeting, "surely these poems will win the acclaim of the group! And then, when we've all agreed that they ought to be praised, I'll spring it on the unsuspecting literati, assembled in all their learned glory! These poems have to be excluded on the basis of their national origin! They're illegal immigrants in the groves of Parnassus!" Oh indeed. The syrup bottle shook in my hands, such was the anticipation. "Oh, the shame they'll all feel at the unexamined nationalist jingoism of their assumptions! Oh, what a frisson I'll have!" I may even have startled the ever-indulgent Valerie as I sprung from my chair, shouting "Epater les bien-pensants! Vive la revolution!" But then again, she's used to my mouth-frothing inexplicabilites, and was probably just happy to see me awake and functional at a respectable hour, what with me being on sabbatical.

Things went as planned at the meeting, and one of my ringers, a poem by an English guy, was singled out for praise by the assembled cogniscenti. But when I raised my trembling hand and, with all the sanctimoniousness of a semi-Canadian, intoned my bit about how we'd either have to drop the American exclusivity of our process, or eliminate this fine and deserving poem from consideration on the basis of an accident of geography, I faced no withering barrage of opposition. Nor did I face any shame-faced liberal guilt. I think the response is best described as a kind of collective "whatever." And the poem was not deported from our proceedings. The idea of a national literature fell without so much as a fourth of July bottle rocket fired in opposition.

And this, I suppose, is the second thing I learned this weekend: the nation state as a category for poetry lives on by mere inertia. Few believe in it enough to defend it, but fewer still are bothered by it enough to get rid of it.

The idea of a national literature seems to have reached its high point in the nineteenth century, but even then it was being undermined by a sense that literature was not entirely compatible with collective national representation. Here's what the sociologist César Graña had to say about this in Bohemian vs. Bourgeois, his study of the nineteenth-century's growing division between literary values and the dominant values of bourgeois society (here he's talking specifically about Flaubert's views on the matter):

There were two kinds of literature, "national" and "individual." The first required a form of mass solidarity based on a common fund of ideas which no longer existed in modern society. The second could only be sustained by intellectual diversity. Flaubert looked at national literature in the way that the romantics looked at national history, as the expression of a unique spiritual collectivity. In a national literature the problem of freedom did not really exist. There was no opposition between the work of art and cultural reality because national life was a human architecture radiating a unified inner principle which had in itself the characteristics of a work of art.

For the idea of a national literature to have any real meaning, there has to be some kind of congruence of (somewhat unified) national values and the literature that expresses them. While the idea of a national literature had a lot of appeal for some Romantics, and for elements of the ever-rising middle classes (who rejected the aristocracy's internationalism), it became problematic for a number of reasons. One of these was the increasing heterogeneity of modern nations. The other was the increasing alienation of cultural-producers from the values of the bulk of the population (Graña has a lot to say about why this occurred -- his book is well worth checking out). So the steam started to go out of the idea, even as it was picked up and institutionalized by the educational systems of many countries.

Sure, some poets actually think of themselves as speaking for a nation. Walt Whitman did — but even he's an odd duck, as a national poet. You could say his Leaves of Grass embodies the tension between a national literature and an individual literature, picking up the dissonance between those two great Romantic ideas, nationalism and individualism. In our own time, you could say Robert Pinsky thought of himself as a national poet when he wrote An Explanation of America. But he's sort of out of joint with the literary community in doing this (in fact, at a recent dinner I attended at which he was a guest of honor, he seemed much more at home with the college trustee types than he did with the literary crowd, but that's another story). The great Modernists like Pound and Eliot were conspicuously Europhile in their sense of literature, and of their place in literature — Comp Lit majors avant la lettre, in a way. A lot of poets think of themselves as part of identity-groups based in non-national bases (Adrienne Rich, say). And at the level of style, we've got to ask whether the nation is really a useful tool of analysis. Can we speak of an "American-style" poem, or a "British-style" poem, when those two nations' laureates, Donald Hall and Andrew Motion, have more in common with each other (in terms of style, and the literary traditions with which they affiliate themselves) than they have with the experimental poets on either side of the Atlantic?

So the idea of a national poetry seems, at least in an American context, a bit empty, a kind of holdover from another time. No wonder no one cared when I tried, in my small way, to sabotage the paradigm. No one seems to have much invested in it. I suppose the idea of a national literature is a bit like the body's appendix: we don't need it, and it is easy enough to remove. But no one bothers to take it out unless there's some urgent need. And we don't seem to feel that need, at least not yet.

Posted by Archambeau at 9:44 AM No comments: