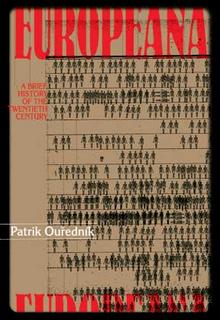 John Latta's new blog, Rue Hazard is up and running, and everyone is required to go there immediately to read the excerpt from Patrik Ouředník's Europeana: a Brief History of the Twentieth Century, which presents us with a kind of intentionally banal, poker-faced history of the 20th century. The narrative style reminds me of Edward Sanders' historical poems, although with a bit more cynical edge: Sanders plays a kind of faux-naif role, while Ouředník speaks in the banalities of whatever historical moment he is describing -- a trick as old as parts of Joyce's Ulysses, but absolutely right for our times, where scraping the barnacles of received public opinion off the interior of one's cranium has become a daily necessity.

The more I look around, the more I see poets and other writers turning to history. For example, a few days ago I sent off an article on Kevin Prufer and Albert Goldbarth to the Notre Dame Review, for which I recently wrote a review of Kevin Ducey and Joe Francis Doerr — all poets deeply concerned with history. And I'm at work on a piece for Pleiades on the new prose book by Geoffrey Hill, for whom history and reformation theology have been major muses. Maybe it's just me gravitating to this stuff, or maybe I've become a kind of muse-of-history-go-to-guy for journal editors, but I think there's more to it than that that: something new is happening with the past.

Posted by Archambeau at 6:03 PM

The Public Sphere, the Market, and Books by their Covers 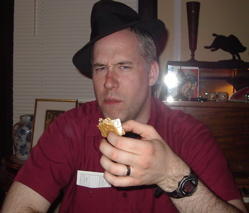 Late yesterday I found this message in my email inbox regarding l'affair Fence (see post below). It came from David Park, a professor of communications at Lake Forest whose mighty brain throbs with the very juices of genius (Park is pictured here enjoying S'mores in my dining room, as is his wont). Says Park:

Dave's up on his Habermasian public sphere theory, so I pestered him for a while via late-night email and, in the end, arrived at the following conclusion: many of the reservations literary types have about the cover come out of an affront to their inherited assumption that intellectual journals are public sphere stuff, not commodities in the market.

You know the classical public sphere model, as articulated by Habermas, right? The ideal of the public sphere is one in which there's a place where we all communicate as equals, where the status of our opinions comes from the merit of our arguments, and where we're removed from concerns of commerce or hierarchical authority. Intellectual journals often have an aura of this ideal. "My disinterested thoughts are here communicated to you, my fellow discussant, for your consideration and possible reply," sayeth the intellectual journal, sotto voce, on every page, "consider these ideas, and talk back, oh reasonable and capable reader." We like to feel, when we grab a literary journal from the rack where it is shelved between Art in America and Conde Naste Traveller, that we're part of a conversation, that we're not so much consumers as we are discussants, members of the public sphere.

When Rebecca Wolff put the topless model Quinne on the cover of Fence to get some sales action going, she committed a sin against these cherished assumptions. She reminded us that, whether we're members of a (real or hypothetical) public sphere or not, we're also part of a market. People out there on the other side of the editorial office door see us not only as subjects of the public sphere, but as consumers. And so she's suffered the fate of most people who bring unwelcome knowledge, and been chided for her actions.

I'm not quite willing to ditch the idea that there really are elements of the public sphere in the little world of literary magazines, though Dave seems to be, sort of. Here's his take:

It's an old question: is there such a thing as disinterested art/ideas/experience/anything? My answer: no, not ever. The more it matters to you, the more interested you are. Tautology ahoy! But still. The attempt to experience art/ideas/experience/anything as disinterested (even if it is accepted that interest is always in there) is what's in play here, and that's much more interesting. So, art and ideas aren't disinterested, and any attempt to experience them as disinterested is doomed to involve a great degree of misrecognition. In some different world, that insight might apply to only a portion of art/ideas. Instead, it applies to almost all that we could call the 'dominant discourse' in art and ideas in contemporary Western society. The presumption that we all give up our interests as we enter the game is a major part of what defines the systems of art/ideas. This is upset by what you call 'catchy packaging,' and what almost anyone else would call a cute topless girl.... I agree that it's a good way to sell magazines and journals, and it's good to be comfortable about selling journals, especially when those journals have reasonably good literature in them. Also, it's good to see someone take on the pompous asceticism common to the world of journals.

So: public sphere or no public sphere, Dave Park's behind the new issue of Fence. Maybe he'll even run out to Barnes and Noble to buy a copy. He'd better move fast, though: I hear they're selling quicker than usual.

Posted by Archambeau at 9:13 AM

My Anxiety of Influence 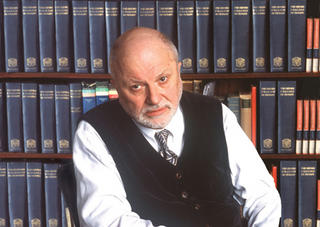 Ooosh. Semester has started early for me this fall, in part because of some administrative hoodoo that has moved the term up by a week, and in part because I'm teaching a freshman seminar, and these always start a week earlier than everything else at Lake Forest. So rather than blogging I've been running around prepping two brand new courses and humming one of the numbers from the unpublishable musical comedy about a former college official I've been writing for the delectation of my friends:

But that's not why you tuned in. No indeed. No doubt you were wondering when the next appearance of Archambeau secondary literature would hit the newsstands. Well, wait no more: there's a new review of Home and Variations out in issue 165 of my favorite English poetry magazine, PN Review. David C. Ward, the reviewer, says some nice things about the poems, and then claims that "Archambeau is an ambitious (sometimes self-consciously so) and intellectual poet; in the family tree of poetry he would be of the branch of Geoffrey Hill." Ambitious? Got me, at least on good days. Self-conscious? Oh yeah. Influenced by Geoffrey Hill? Yes, but honest to God I thought I'd hidden it so well that no one would ever know.

I mean, old weird Harold Bloom's theory of the anxiety of influence has a lot wrong with it, but one thing he gets right is the way many of us want to hide our influences, lest we be held up to some pretty intimidating comparisons. Hill has been a favorite poet of mine since my first year of grad school, but he makes me nervous in the way that only those you admire fully can make you nervous. I was once invited to a dinner where he was the guest of honor and didn't say a word at the time, so awe-stricken was I (when Keith Tuma argued with Hill over some minor point, I half-expected death rays to shoot out of Hill's eyes and vaporize him). Since Hill's always garnering praise along the lines of "Let us make one thing clear: Geoffrey Hill is the greatest living poet in the English language" (Nicholas Lezard, in a review in The Guardian), being compared to him is a bit like being a guitar player and being compared to Jimi Hendryx. On the one hand, you're grateful. On the other, you rather wish you'd covered your tracks a bit better.

So here's a game for you: which of Bloom's six "revisionary ratios" can you find in Home and Variations' Hill-influenced poems? Play as often as you want, but please don't tell me about it — I'm self-conscious enough as it is.

Posted by Archambeau at 4:06 PM