Excess, Pastiche, and Queerness in the Comics: Reading The Black Dossier 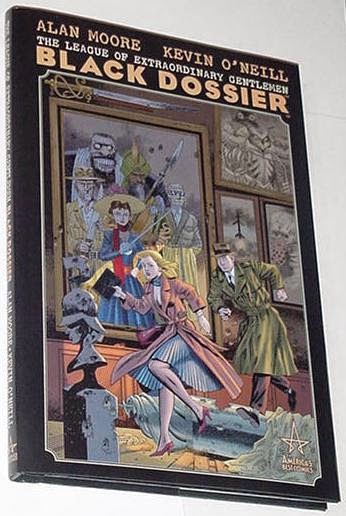 One of the things to love about comic books is the sheer excessiveness of the things.  Part of this stems from the genre of the marvelous, where anything can happen and the rules of realism don't apply.  Bodies become plastic, or move at amazing speed, or leap tall buildings at a single bound, worlds connect to other worlds, other times, other dimensions, and so forth.  Part of the excessiveness, too, stems from the fact that most comics are written in the form of the romance—not the "falling in love" sort of romance (although there have been some built on that model), but the romance as episodic quest narrative, a series of trials leading to rewards.  These serial formats are open-ended, and tend to give us a bunch of climaxes ("The villain we've faced for eleven issues is finally dead!" or "The hero we've loved for a decade has died!") that turn out to be false ("The villain was merely frozen in a derelict space station!" or "The dead hero has risen again!").  These false climaxes would be in poor taste in an epic or a realist's novel—but with the serial, the show must go on.  Also, most mainstream comics are shamelessly commercial, and you just don't kill a franchise by killing off its heroes and villains.  You kill it off by driving its best writers and artists away when corporate status monkeys seize control of the operation.  But that's a different story.  Another part of the aesthetics of excess in comics has to do with repetition.  Certain types of gratification must occur again and again—the most overt manifestation of this being the way each volume of Asterix ends with a repetition of what is essentially the same feast, a re-affirmation of the stability of community at the end of the quest.  And finally, there's the excess of proliferation, of adding more and more levels to the mythos of the original.  Jodorowsky and Moebius, in The Incal, for example, always seem ready to add another secret society, a higher level of interstellar government, a conspiracy behind the conspiracy, another galaxy bent on taking over ours.  "I'll explain it all when we get to my secret underwater base," says a new ally, rushing to the rescue of our beleaguered protagonist.  But it will never all be explained—explanation can't keep up with invention.  And that's all part of the contract: it's not like the wretched television show Lost, which promised to stitch everything together and then died a shameful death, strangled on its own loose ends.  The world of the comics promises to continue opening out to wider and more fabulous horizons, and either you're up for that or you go and read Raymond Carver.

I mention all this as a kind of preamble for some comments about the aesthetics of Alan Moore and Kevin O'Neill's The League of Extraordinary Gentlemen: The Black Dossier, from back in 2007.  The two are a tremendous team, and Moore is beyond doubt a genius, however one wishes to define that term (my personal definition is this: if, every time I read one of your works, I feel compelled to start planning to write a book about you, you are a genius).  The Moore-O'Neill aesthetic in The League of Extraordinary Gentlemen seems to me to be predicated on two things, both related to the idea of excess: syncretism and pastiche.

One of the more unusual things about The League of Extraordinary Gentlemen throughout its existence has been the creation of false documents to go along with the main narrative.  It's an old literary technique to append letters or testimonies or 'found' documents to a narrative, like the maps Tolkien created for Middle Earth; or to embed them in the narrative itself, like Captain Walton's letters at the start of Frankenstein or the documents Dr. Lanyon leaves for our heroes in The Strange Case of Dr. Jekyll and Mr. Hyde.  It's a little more unusual to use this in the comics, but Alan Moore is nothing if not literary— The League of Extraordinary Gentlemen is a virtual catalog of characters and tropes from centuries of literary and pulp fiction.  It should be no surprise, then, to find him appending supplementary documents to the various installments of League—and we get them in a multitude of forms, from false advertisements—including one for "Marvel Brand Douche" back when he worked with Marvel Comics' rival, DC—to stand-alone narratives of some scale.  As the title hints, The Black Dossier moves these documents to the center of the narrative, but figuratively (there are a lot of them) and literally: many of them come in the middle of the ostensibly 'main' narrative, when our hero and heroine sit down to read the titular 'Black Dossier,' containing documents that chronicle the centuries-long history of the League.

The role of the false documents in The Black Dossier, or one of them, is to create, and explain, the world in which the events told in the main narratives can exist.  That is: the main narrative of the League traditionally consisted of a bringing together of various creatures from the popular Victorian imagination: Jules Verne's Captain Nemo, Robert Lewis Stevenson's Dr. Jekyll and Mr. Hyde, H.G. Wells' Invisible Man, H. Rider Haggard's hero Allan Quartermain, Mina Harker from Bram Stoker's Dracula, and so forth.  In The Black Dossier, we expand the historical range into mid-century Britain, adding a young (and villainous) 007, and a recently-ended period of history in which Britain had succumbed to the Big Brother regime of Orwell's 1984, among other things.  It's a tremendous work of syncretism, bringing all of these imaginative works together, and one of the functions of the documents at the heart of The Black Dossier is to take all of these wildly various things and bring them together in something close to a coherent mythos.  So, for example, we read a mysterious document that tells a story of the intervention of supernatural forces into our own world since deep in prehistory, a document that links Cthulu with Conan the Barbarian's Crom, that interweaves Egyptian and Greek mythology with Michael Moorcock's Elric of Melniboné, and Virginia Woolf's gender-shifting immortal hero/heroine from Orlando with Queen Elizabeth as an actual faerie queen.  It takes the excess of syncretism and imposes something like an order on it (I say "something like" because these documents are presented as partial, subjective, and possibly wrong—the excess is partially ordered, but by no means tamed).  The documents that follow present aspects of this syncretic history.

What makes these documents really tasty, though, is that each takes the form of a pastiche: the pan-mythological document I mention above is a kind of riff on Lovecraft, and the history of Orlando's life is in the form of Classics Illustrated comics.  Another document, one revealing the faerie nature of Queen Elizabeth and recounting her encounter with the ('real life') sorcerer Prospero and the ubiquitous-as-Zelig Orlando, is written in the form of a little lost Shakespearian play, and so forth.  Everything is done in imitation of some other verbal and visual style out of the history of literature and pop culture.  There's an endless invention here, in excess of the mere demands of plot, an invention clearly based on a love of the prolific inventiveness of the past.  A love, maybe even a reverence.  I mean, here's how Moore describes the vast constellation of imaginative creation:

The planet of the imagination is as old as we are.  It has been humanity's constant companion with all of its fictional locations, like Mount Olympus and the gods, since we first came down from the trees, basically.  It seems very important, otherwise, we wouldn't have it.

The thing that keeps this reverence for the whole of imaginative—especially narrative—creation from congealing into something Worthy and Highminded, like the archetypes of Jung or Northrop Frye, is the way the tributes to other styles undergo various forms of what Mikhail Bakhtin called "transcoding."  Bakhtin was thinking of how Rabelais would rework Christian themes with reference to the functions of the body—pissing and shitting and farting and fucking—in order to strip away sanctimoniousness and create comedy.

Moore often does this sort of thing.  Sometimes it's straight out of Bakhtin's Rabelais, as when he gives us a pastiche of Shakespeare with characters like Master Pisse and Master Shytte (although these aren't too far from the kind of comic characters Shakespeare himself includes); sometimes it’s a matter of incongruously crossing the unlike—as when we find P.G. Wodehouse's Edwardian nincompoop Bertie Wooster recounting his encounters with the demonic and supernatural.  Most often, though, it’s a sexualizing of the narrative source.  There's a brilliant little insert, for example, designed to look like the state-produced pornography secretly circulated among proles by a government ministry in Orwell's 1984.  In one frame, a man cries out about how love proves that "they" can't crush our spirits—but he does this while his hairy buttocks shake during sex on an assembly line, and the transcoding undermines his statement.  This seems like a nasty trick—but then again, it is presented as the action of an Orwellian state, bent on undermining all attempts to subvert its authority.

Often, the sexualizing in Moore's work is also a kind of queering—a taking us beyond the norms of reproductive heterosexuality.  Sometimes this involves only a little exaggeration of the source narrative (Bram Stoker's Dracula is already liminal with regard to queer sexuality, and you just have to nudge Woolf's Orlando a little toward the NC-17 line to make its queerness explicit).  There's also a tendency to take things that are already sexualized, like the James Bond mythos, and amp up the bondage and discipline or dominance and submission quotient.  All of this makes it clear that we're dealing with pastiche rather than replication: it marks a difference from the original, marking the text as having a kind of difference and aiming at something other than replication.  It's excessive, sure, to add all of this: but the excess makes sense. It frees us from the burdens of accuracy and solemnity, marks the narrative territory as belonging not only to the progenitors of the original characters, but as Moore's own.  And, in the best traditions of popular culture, it adds the titillation of the basic drives and the thrill of the forbidden to the more respectable and 'literary' pleasures of the text.  It's the excess, after all, that makes you want more.
Posted by Archambeau at 3:02 PM 2 comments: