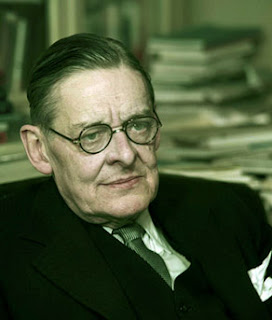 I've been working on a chapter about T.S. Eliot for a book whose current working title is Poetry, Autonomy, Society, and I've been trying to think of a way of addressing Eliot's very real, entirely inescapable anti-Semitism.  On the one hand, I don't want it to become the main focus of the chapter, since the book is about the idea of aesthetic autonomy.  On the other hand, I don't want to act like Eliot's anti-Semitism didn't exist, or didn't matter, or didn't play an important role in his poetry and his social writings.

One line of argument I'm making in the chapter is that Eliot's early interest in aesthetic autonomy comes from his break with his own social class' moralism.  That is: he comes from a long line of people who formed a social elite in Boston, and in various communities where Bostonians settled, as in his native St. Louis.  The Bostonian elite believed in a very paternalistic kind of civic-mindedness.   They were not firm believers in popular, bottom-up democracy—but they thought elites should be good stewards of the community, and they often lavished funds on hospitals, churches, schools, and charities of all sorts, and were wary of excessive avarice and of financial speculation.

Beginning in the years after the Civil War, they began to be displaced by a newer and more overtly materialistic elite, often politically corrupt (this new elite was overwhelmingly made up of gentiles, both Protestant and Catholic).  The decline of their class accelerated right around the time Eliot was born in 1888.  And when their power fades and their old ideal of stewardship is no longer relevant to their new circumstances, Eliot turns his back on the moralistic aesthetic associated with his class—think of the poetry of John Greenleaf Whittier, or of James Russell Lowell, both with family connections to the Eliots—and writes less overtly moralistic poetry, as well as poetry that satirizes the old elite's rectitude and reserve. Think "Portrait of a Lady" or "The Love Song of J. Alfred Prufrock" — though there's more to both poems than a rejection of overt moralism and the ethos of the Boston elite.

So, since I'm already discussing Eliot's class circumstances as a way of explaining some of his aesthetic choices, I want to take this as an opportunity to discuss his anti-Semitism, especially since Eliot's prejudice isn't just a personal quirk: it's part and parcel of the outlook of his class.  Which is not to say that they were the only American anti-Semites, but their anti-Semitism took a particular form.  That is: the decline of the old elite happened to coincide with the arrival of numbers of Jewish immigrants, many of whom prospered in American conditions.  Always an easy target for those with axes to grind about their position in society, these immigrants bore much of the brunt of Eliot's class' resentment about their own loss of status.

Many among the old elite believed that scruple, gentlemanly habit, and class-based reservations hampering them in their attempts to retain privileged positions.  There is certainly some truth with regard to their loss of political power in cities like New York and St. Louis, where political bosses like William Magear "Boss" Tweed and Edward "Colonel Ed" Butler used tactics anathema to the well-bred gentleman to secure power, and it may have had some truth in the economic sphere, where fortunes like those of the Carnegies and Rockefellers (new money men, not members of the old elite) were built with a ruthlessness the old elite had never known.

But along with disdain for the new political and economic elite—both overwhelmingly Christian—came an anti-Semitism, drawing on longstanding bigotry and the coincidence of the arrival of Jewish immigrants with the decline of the old elite.  That is, a measure of the anti-Semitism endemic to Eliot and his class may be traced to their notion that their genteel ideals put them at a disadvantage vis-à-vis the Jewish immigrants who were arriving in America and often thriving in an environment that did not restrict their actions to the degree that many European countries had.  No less a Brahmin than Henry Adams, thinking of the man of the old class, wrote:

Not a Polish Jew fresh from Warsaw or Cracow—not a furtive Yacoob or Ysaac still reeking of the Ghetto, snarling a weird Yiddish to the officers of the customs—but had a keener instinct, an intenser energy, and a freer hand than he—American of Americans, with Heaven knew how many Puritans and Patriots behind him…

The old elite’s sense of displacement, coinciding with the arrival and success of Jewish immigrants, in no way excuses the anti-Semitism of “Gerontion” or After Strange Gods, although it might be said to provide an explanatory context: Eliot’s bigotries were those of his class in a particular phase of its decline.