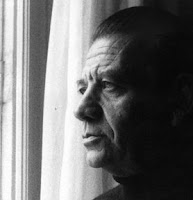 A bunch of Chicago-area poets will soon be braving weather conditions that would probably send a Floridian to an early grave in order to assemble at Garin Cycholl's place to talk about Edmond Jabès, so I've been reading The Book of Questions.

This isn't actually the book we're supposed to read, but out of some poorly-defined nostalgia connected to the aging process I'm reverting to my old undergraduate habits — instead of reading the assigned text, I'm reading a different work by the same author. I used to do this out of a deeply misguided and pathological anti-authoritarianism. Oh, the craziness and general imbecility of it all. I can see Young Archambeau now, grumbling, beneath all that hair gel: "ain't nobody gonna tell me what to read! Old man thinks he knows about books... hah! I know about books...mutter mutter, grumble grumble" [fumblings in one's backpack for one's 1987-era walkman, placing of headphones over ears, sullen slouching away across the quad, to the sound of Hüsker Dü's Candy Apple Grey accompanied by tape-hiss and adolescent moping].

Anyhow, as a way of getting a handle on Jabès, I've been doing little compare/contrast exercises as I read. Here's today's effort, hot from the pages of my notebook:

Posted by Archambeau at 5:01 PM No comments: