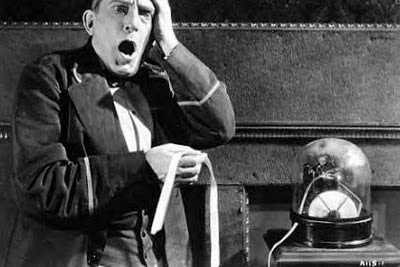 What's this? A new dispatch is just now coming in on the Samizdat Temporal Distortion Teletype. It seems to be from the late Christopher Caudwell, our correspondent from the 1930s. What's he up to? Ah! It's the usual 1930s business, to start — a big, familiar quote from The Communist Manifesto, the part that praises the energy and transformative power of the bourgeoisie (my people — and yours, probably) and their capitalism:

The bourgeoisie has disclosed how it came to pass that the brutal display of vigour in the Middle Ages, which reactionaries so much admire, found its fitting complement in the most slothful indolence. It has been the first to show what man’s activity can bring about. It has accomplished wonders far surpassing Egyptian pyramids, Roman aqueducts, and Gothic cathedrals; it has conducted expeditions that put in the shade all former Exoduses of nations and crusades.

The bourgeoisie cannot exist without constantly revolutionising the instruments of production, and thereby the relations of production, and with them the whole relations of society. Conservation of the old modes of production in unaltered form, was, on the contrary, the first condition of existence for all earlier industrial classes. Constant revolutionising of production, uninterrupted disturbance of all social conditions, everlasting uncertainty and agitation distinguish the bourgeois epoch from all earlier ones. All fixed, fast-frozen relations, with their train of ancient and venerable prejudices and opinions, are swept away, all new-formed ones become antiquated before they can ossify. All that is solid melts into air, all that is holy is profaned, and man is at last compelled to face with sober senses his real conditions of life, and his relations with his kind.

Hang on a minute. Let me see where Chris is going with all this. I'm a slow typist, so I'll keep it short. Let's see. How about "Thanks for note stop where are you going with this stop say hi to Auden if you see him stop or Stephen Spender stop all best stop Bob stop." That ought to do it.

Ah! Here's the clickety-clack of his response, coming in on the ticker-tape now!

Capitalist poetry reflects these conditions. It is the outcome of these conditions.... Its art is therfore in its essence an insurgent, non-formal, naturalistic art. It is an art which constantly revolutionizes its own conventions, just as bourgeois economy constantly revolutionizes its own means of production. This constant revolution, this constant sweeping-away of "ancient and venerable prejudices and opinions," this "everlasting uncertainty and agitation," distinguishes bourgeois art from all previous art. Any bourgeois artist who rests upon the conventions of his time becomes "academic" and his art lifeless.

God, Chris types fast. Okay, let me spool up the paper and assess all this....Um hum. Hmmm. Looks like it comes from the notes that'll go into his book Illusion and Reality: A Study of the Sources of Poetry. Mmm hm. Yup yup yup... But — but — but — but isn't one of our great sacred cows the notion that aesthetic radicalism is tied to political radicalism? Isn't it a given that experimental poetry is tied to radical leftism? We hear that received opinion echo from Ron Silliman's Palazzo Avant-Posti in Pennsylvania all the way over to the gates of Jeremy Prynne's secret bunker in Cambridge. Is Chris aware of the scuffle his opinion would kick up? I am just now reminded by my assistant Igor that Christopher Caudwell died while operating a machine gun against Fascist forces in the Spanish Civil War, so he probably wouldn't be afraid of a few angry poet-professors. Still, I should get back to Chris and tell him what he's getting himself into with this alternate take on poetic innovation. Sadly, though, I've become entangled in the tickertape, and must send Igor off to get the scissors. Until he returns, my hands are tied.