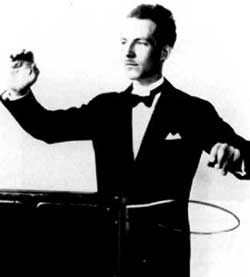 You remember the theremin, right? The musical instrument developed by electronic music pioneer Léon Theremin in the 1920s? Most of us know it as a maker of weird, spooky sounds in the sci-fi flicks of the fifties, or perhaps from the beginning of The Beach Boys' "Good Vibrations." The thermin works through an electromagnetic field, so you don't even have to touch it to play it — you just wave your hands in the air like a conductor. It was orginally developed as part of Theremin's grand scheme for a purely electronic symphonic orchestra, but it took a few odd turns in its development, as did Theremin's life ( which involved Paris and New York in the jazz age, marrying the African-American ballet dancer Lavinia Williams way before the civil rights movement, being kidnapped by the KGB and forced to develop the electronic eavesdropping device known as the bug, and other things that won't happen to you or to me).

I'd been thinking about writing a poem about Theremin for years, and had originally intended to contrast the utopian future he'd dreamed of in the twenties (a sort of Fritz-Lang's Metropolis-looking world of wireless orchestras) with the very different utopia he saw at the end of his life, when he went to California and heard "Good Vibrations." Fritz Lang vs. Michael Lang, really.

But that poem, which I may still write someday, took some odd turns of its own. Originally called "Theremin in California" it has morphed (via all the discussion about names over the past monts, among other things) into "Called Léon, a Leonardo" and it is up at Seven Corners, a new site with some great stuff by Kristy Odelius up as well.

Oh yeah. The poem has links that help make the looking-up of contingent details a little easier, as well as a link to a tremendous little film clip in which a nonegenarian Theremin demonstrates his invention.

Posted by Archambeau at 9:28 PM No comments: